Dental hygienists can serve as the first line of defense in acknowledging the symptoms of these serious health problems.

By Ann O'Kelley Wetmore, MSDH, RDH On May 17, 2012 0
PURCHASE COURSE
This course was published in the May 2012 issue and expires May 2015. The author has no commercial conflicts of interest to disclose. This 2 credit hour self-study activity is electronically mediated.

Almost 11 million Americans are diagnosed annually with eating disorders (EDs).1 Females are two-and-a-half times more likely than males to develop an ED.1 Table 1 provides details on anorexia nervosa (AN), bulimia nervosa (BN), and binge eating disorder (BED), which are recognized by the American Psychiatric Association in the Diagnostic and Statistical Manual, 4th edition.2,3

An individual with an ED has intense emotions, attitudes, and behaviors surrounding weight, food, and body image influenced by society and culture, as well as psychological, physiological, and familial factors. Psychological factors that can contribute to the development of an ED are feelings of low self-esteem, inadequacy, lack of control in life, depression, anxiety, anger, and loneliness.4,5

Inheriting a tendency toward depression or anxiety and interpersonal and family components may influence whether an individual develops an ED. These include a familial history of abuse (drugs, food, alcohol, sexual, physical, and verbal) and/or inheriting the abusive personality trait.1 Having parents who model body dissatisfaction and dieting is a risk factor for an ED.1 Conflicted family relationships, as well as not feeling safe to express emotions and feelings, may lead to development of an ED.1 A history of being teased or ridiculed about body size, shape, or weight increases the risk of EDs.1

Currently, there is no conclusive research on biochemical or biological causes of EDs. Ongoing studies on chemicals that affect the brain, hormones, and their influence on hunger, diet, and appetite, as well as genetic components, may help identify those people predisposed to some EDs.6

AN is characterized by self-starvation and excessive weight loss. Risk factors for developing AN including genetics, hormone regulation, and family dynamics. In the United States, AN occurs in 0.9% of women and 0.3% of men, with the average age of onset at 19.7,8 Mortality rates associated with AN are high; 6% to 20% of patients eventually die due to starvation or suicide.7,8

Bulimic rituals include eating large amounts of food—more than most people would eat in one meal—in short periods of time, then getting rid of the food and calories to avoid weight gain through self-induced vomiting, use of enemas or diuretics, and excessive exercise.2 Because these compensatory behaviors do not rid all extra calories consumed by the patient with BN, body weight may remain normal. The BN patient has a persistent concern with body image and absence of AN.2 In the US, prevalence of BN is 0.6% with the average age of onset at 20.8

The etiology of BN is multi-factorial. BN patients are mostly women or girls who have a history of familial obesity and/or recurrent binge eating. In men with BN, incidence of comorbid psychiatric illness, substance abuse, homosexuality, and bisexuality might be increased.9 Men who participate in sports with a weight or low body fat requirement, for example, wrestlers, jockeys, or bodybuilders, are more likely to experience BN.9,10 BN usually develops during or after an attempt to lose weight.1 Bulimic activities are triggered by feelings of anger, anxiety, or depression subsequently resulting in feelings of guilt after a binge, although some find the binge to be soothing.1 Mounting evidence shows genetic factors such as familial history of obsessive compulsive disorders, depressive disorders, alcoholism, abuse, or obesity, as well as poor interpersonal dynamics between parent and child are factors in BN.5,6,11,12 Feelings of personal helplessness, fear of losing control, and a self-esteem highly dependent on opinions of others may contribute to bulimic activities. People with BN have an all-or-nothing style of thinking and may perceive interpersonal conflict and challenge achievement as particularly stressful.

BED is difficult to diagnose because it is largely self-reported. Psychological and psychiatric disturbances are root causes of BED. People with BED frequently binge on food. Unlike those with BN, they do not participate in purging. It is estimated 2.8% of adults have BED with the average of onset at 25.1

Eating disorders not otherwise specified (EDNOS) are also important to recognize. Night eating syndrome (NES) is based on an abnormally increased food intake in the evening and nighttime.3 NES involves continual eating throughout evening hours, which produces feelings of guilt and shame, not enjoyment. Because of the increased caloric intake, the person with NES has similar health risk factors as the overweight or obese. Estimates suggest perhaps only 1% to 2% of adults have NES.3 Research indicates about 25% of people who are overweight by at least 100 pounds have NES.3

Recently, health care providers have identified conditions related to EDs. Diabulimia is a “new” ED in which people with type 1 diabetes deliberately reduce insulin treatment for the purpose of weight loss.16 Reducing insulin puts the body into a starvation state, resulting in the breakdown of muscle and fat into ketone bodies and subsequently ketoacids.16 The body is unable to process consumed sugars, therefore, it excretes the sugars so they are not used by the body for energy or stored as fat.16 This typically results in significant weight loss but also places the patient at risk of a life-threatening condition known as diabetic ketoacidosis.16

Orthorexia refers to an obsession with eating healthy food and avoiding unhealthy food. If left untreated and/or combined with other risk factors, orthorexia may progress into a full clinical ED.17

Oral complications are also related to ED behaviors (Table 2, page 68). In the restrictive type, oral manifestations result from malnourishment and include soft tissue lesions, angular chelitis, candidiasis, and glossitis.4,5,13–15 In the extremely underweight, poor oral hygiene has been reported due to fatigue and depression, and may be a factor in caries and periodontal incidence.15 Conversely, BED and NES patients who do not restrict their diets may exhibit similar oral signs of malnutrition because the calories consumed are mostly carbohydrates, which do not provide all the necessary nutrients. NES patients may have a higher caries rate due to intake of carbohydrates during times of little salivary action.3,15

Of all ED habits/rituals, those who purge through vomiting display the most obvious oral manifestations. Patients who purge through vomiting may exhibit parotid gland enlargement and salivary dysfunction, including xerostomia, within 1 week (Figure 1).15 Tooth enamel erosion, classically on the lingual surfaces of the maxillary anterior, may be noted after 6 months of purging behavior, due to high acidity of stomach fluids (Figure 2).15 Patients with BN may complain of sensitive teeth due to exposed dentin and or perimolysis (decalcification due to exposure of stomach acid from chronic vomiting) around existing restorations (Figure 3). A clinician may note Russell’s sign, a callous on the dorsal surfaces of the fingers, from inserting across the teeth to self-induce vomiting (Figure 4).15

Palatal lesions and or chipped anterior teeth may be detected from fingers or other objects including spoons, combs, and toothbrushes jammed into the tissues to induce vomiting (Figure 5).15 Soft tissue lesions are noted due to malnutrition from malabsorption of nutrients due to constant purging behaviors.15 Unlike patients with AN who do not have the energy for self-care and have poor oral hygiene, patients with BN, because of their obsessive-compulsive nature, tend to have excellent oral hygiene. Although good plaque control lessens caries risk, vomiting may result in a higher risk of caries at the gingival margins due to erosion from increased oral acidity.18

Oral health care providers are often the first to identify AN and BN based on oral manifestations. Upon recognition of oral clues for these EDs, the first task of the oral health care provider is to help the patient seek therapy.4,5,14,15,18,19 People with EDs are often very secretive about their condition. Patients tend to be embarrassed by the behavior, therefore the clinician must be nonjudgmental and try to establish a rapport (Table 3).14,19

Studies show dental hygienists and female dentists are more likely to feel comfortable in recognizing oral manifestations and discussing EDs with their patients.18,20 Dental hygienists often do the initial screening of a patient’s oral condition. The ability of dental hygienists to explain the etiology of EDs, oral complications, and physical ramifications, while encouraging the patient to seek help, is fundamental to thesuccessful treatment of EDs.4,5,14,15,19,20

Collaboration among all health care providers, to share knowledge and research on early symptoms, has the potential to provide improved treatment outcomes due to earlier treatment interventions for those experiencing EDs.

Ann O'Kelley Wetmore, MSDH, RDH, is an assistant professor in the Department of Dental Hygiene at Eastern Washington University (EWU) in Cheney, Wash, where she teaches both undergraduate and graduate clinical and didactic courses. Wetmore's research interests include critical thinking, reflection, and the use of technology in education. In 2011, she was selected as an EWU Professor of the Year, and in 2007, she received the University of Texas Houston Lorna Bruning Award for Clinical Dental Hygiene Educators. Wetmore has clinical dental hygiene experience in multiple practice settings and holds licensure in four states. 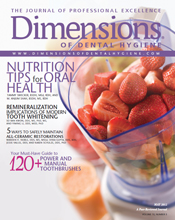