Protecting the Oral Health of All Children

Sealants are an integral part of comprehensive caries prevention and management.

Dental caries is the most common pediatric disease in the United States and is a significant public health problem for vulnerable children, especially children from low-income households, ethnic/racial minorities, and those with special health care needs or chronic health conditions. To combat the caries epidemic, dental professionals must effectively utilize all of the prevention and management tools in their armamentarium, including pit-and-fissure sealants.1

Although sealants have proven efficacy, National Health and Nutrition Examination Survey data indicate that poor children with the greatest need for preventive care are the least likely to receive dental sealants. For example, twice as many children age 2 to 4 from poor households have either caries that has been treated or untreated tooth decay (34.1% and 28.4%) as children from nonpoor households (14.5% and 11.6%).8 However, only half as many poor children receive sealants compared to their nonpoor peers (21% and 42.4%, respectively).8 Disparities in the receipt of preventive care may contribute to children’s oral health disparities.

Most sealants are provided in dental office settings. Thus, improving sealant utilization rates for socioeconomically vulnerable children, such as those enrolled in state Medicaid dental programs, will involve concerted efforts to increase the number of children who have access to school-based preventive programs or receive professional oral health care services in a dental home.

Numerous studies support sealing noncavitated caries lesions that extend into enamel or dentin, as long as the pit and fissure isn’t cavitated and the tooth is not symptomatic.9,10 Sealing over caries is clinically effective and benefits patients by eliminating the need for local anesthesia and invasive treatments, as well as dental practices by reducing chair time devoted to restoring teeth. State Medicaid dental programs may also benefit due to a decrease in the costs associated with subsequent restorative care. The decision to seal a tooth also involves consideration of caries risk factors beyond physical tooth-level attributes, including those that exist at the patient-, family-, and community-levels.11

Implementing up-to-date clinical guidelines on dental sealants is also important. A recent study reported that fewer than 40% of dentists in the US seal noncavitated caries lesions.13 A New Hampshire-based study found that Medicaid-enrolled children seen by a general dentist are significantly less likely to receive sealants than those seen by a pediatric dentist.14 Another study showed that dentists’ existing practice behaviors are a major barrier to sealant guideline adherence.15 It is likely that many dental health providers, especially general practitioners, rely on clinical techniques learned in school without updating practice patterns based on new scientific evidence.16,17 One-time continuing education courses may not be sufficient to change provider behaviors in ways that improve the health of patients, though additional studies are needed on this topic.18 Dental curricula should be continuously updated to reflect new scientific evidence, and strategies must be developed to facilitate rapid implementation of evidence into dental practice.

EXPANDING THE SCOPE OF PRACTICE

Studies suggest that sealants delivered within school settings are more cost-effective than sealants delivered in public or private settings. 19 Care delivery efficiency can be improved when sealants are provided in places where children spend most of their time rather than requiring them to travel to dental offices. School-based sealant programs may help to improve sealant utilization rates without increasing costs. Quality assessment protocols need to be implemented within school-based sealant programs to ensure that high-risk children receive sealants, to monitor sealant integrity over time, and to ensure optimal oral health outcomes. There is also a need to support innovative workforce-based solutions, including expanding the scope of practice of dental auxiliaries and deploying dental therapists in geographically or socioeconomically isolated areas in which there are dental workforce shortages.

Studies indicate that parents of young children have limited knowledge about sealants.20 This lack of knowledge is a barrier to parent acceptance of sealant treatment for their children.21 When sealants are indicated, dental health providers need to explain to the parent and the child why the teeth are being sealed, how sealants prevent decay, technical steps involved in sealing teeth (eg, using “tell, show, do”), and reinforce the need for high-quality oral hygiene behaviors at home.

Explaining the importance of dental visits is also critical, so that sealants can be monitored and reapplied if necessary. Some parents may express concerns associated with the safety of dental sealants, especially with bisphenol A derivatives.22 Dental health providers must be prepared to have potentially difficult conversations with parents about the health risks and benefits associated with sealants.

Sealants alone are not likely to be sufficient in preventing tooth decay, especially among high-risk children. A 2010 Cochrane Review reported that sealing permanent first molars is more effective than fluoride varnish at preventing caries.23 However, an older study from 1984 reported that first permanent molar sealants and fluoride varnish applications every 6 months are more effective than the varnish application alone at preventing decay.24 While relevant studies have not yet been conducted, additional preventive chemotherapeutics, such as povidone iodine and diammine silver fluoride, used in conjunction with sealants may be necessary to prevent caries in high-risk children. Additional research is needed on the effectiveness of combined preventive approaches. In addition, factors such as poor dietary behavior and inadequate exposure to topical fluorides are directly related to caries. Thus, parents must be motivated to ensure that their children engage in behaviors that promote good oral health.

All state Medicaid programs reimburse dental health providers for sealants on permanent molars for children, but only one in three programs reimburse for primary molar sealants.25 The ADA clinical recommendations on dental sealants recommend sealing primary molars,2 but these recommendations are based on data extrapolated from permanent teeth. There is currently very little published research on primary molar sealants. Because of federal budget cuts and limited financial resources, policymakers may increasingly insist on scientific evidence to justify coverage of dental services provided to socioeconomically vulnerable enrollees. This will require dental researchers to continue conducting cost and outcomes analyses of preventive care provided to Medicaid-enrolled children and to help disseminate research findings. Dental health providers must stay current on the scientific literature so that accurate information can be provided to those involved in drafting Medicaid dental policies and legislation.

Pit-and-fissure sealants are an important part of the prevention armamentarium. Dental health providers can help vulnerable children benefit from sealants by remaining knowledgeable on sealant indications, communicating knowledge about sealants to parents, and ensuring that children receive sealants, as well as other types of professional preventive care. They must also work with parents to ensure that children engage in home-based behaviors that promote optimal oral health, such as toothbrushing with fluoride toothpaste and limiting intake of fermentable carbohydrates. Finally, dental health professionals should work with local communities to implement and grow school-based sealant programs and convey up-to-date scientific knowledge about sealants to policymakers and stakeholders. Increasing the number of socioeconomically vulnerable children who receive pit-and-fissure sealants will play an important role in reducing children’s oral health disparities.

The authors would like to thank Sarah Everett and Lauren Lewis for their help in preparing this manuscript. 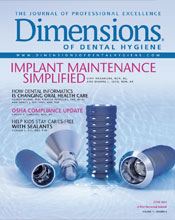