By Donald L. Chi, DDS, PhD and Angela Kim On Dec 9, 2015 0
PURCHASE COURSE
This course was published in the December 2015 issue and expires December 21, 2018 2021. The authors have no commercial conflicts of interest to disclose. This 2 credit hour self-study activity is electronically mediated.

Dental caries is the most common childhood disease.1 Early childhood caries (ECC) affects children younger than 6 and is defined as one or more decayed, missing, or filled surface (DMFS) on any primary tooth.2 Among children younger than 3, any smooth surface caries is classified as severe early childhood caries (S-ECC). S-ECC is defined as a DMFS score of ?4 for children age 3; ?5 for children age 4; and ?6 for children age 5.2 When untreated, ECC and S-ECC can lead to pain, infection, tooth loss, hospitalization, and greater likelihood of caries in the permanent teeth, which contributes to increased dental treatment costs, school absences, and decreased quality of life.3

Based on 2011-2012 data from the National Center for Health Statistics, 23% of children, or 5 million, age 2 years to 5 years in the United States have ECC.4 There are a number of demographic, behavioral, and social factors associated with ECC.5 Certain children are at increased risk, including racial and ethnic minorities, immigrants, children with developmental delays and special health care needs, uninsured children, and children living in low-income households.6

The three most important behaviors in ECC prevention are regular dental visits, consistent oral hygiene with exposure to fluorides, and a diet low in fermentable carbohydrates. Children without a dental home experience higher rates of ECC than those who receive regular oral health care.7 Toothbrushing with fluoride toothpaste helps to remineralize teeth and prevent ECC.8 The prenatal dietary behaviors of mothers and post-natal infant feeding habits are also relevant to ECC risk. Frequent intake of foods and beverages containing fermentable carbohydrates—particularly sugar-sweetened beverages like fruit drinks and soda—can lead to ECC.9,10

In two separate studies, higher prenatal maternal vitamin D intake was associated with lower ECC rates for children age 1 year and those between 36 months and 46 months.13,14 Vitamin D measurements were based on a dietary history questionnaire and measurements of blood serum levels of 25-hydroxyvitamin D. The latter study reported that mothers with blood serum vitamin D concentrations greater than 75 nmol/L had children with fewer decayed teeth.14

A number of studies have examined the relationship between breastfeeding or bottlefeeding and ECC. Two Brazilian studies found significantly higher ECC rates among children who were never breastfed.15,16 Another study found higher ECC rates among children who were exclusively bottlefed compared with those who were exclusively breastfed.17 A study based on US National Health and Nutrition Examination Survey data suggested no association between breastfeeding and ECC.18 Another study, however, reported the reverse, in which children who were exclusively breastfed had significantly higher ECC rates.19 Collectively, the mixed results of these studies suggest that feeding modality either makes no difference or may be overwhelmed by other associated behaviors that expose children to high levels of fermentable carbohydrates.

In summary, on-demand feeding should be discouraged. Nighttime feedings should be minimized and breastfeeding mothers should consider weaning children by age 2 to reduce ECC risk.

In summary, young children should avoid carbonated soft drinks and other sugar-sweetened beverages. While 100% fruit juices do not appear to be associated with ECC, large volumes can increase ECC risk. Milk and water appear protective against ECC.

Since the Vipeholm study was completed in the 1950s,31 it has been widely accepted that excess dietary carbohydrate intake is the primary behavioral etiology of dental caries. Recent research has found that both absolute (measured in grams) and relative (measured as a percentage of total energy) daily sucrose intake are associated with ECC.32 Many beverages contain sucrose and other fermentable carbohydrates. Example of foods associated with ECC are sweet snacks, confectionaries (eg, candies, chocolate, lollipops, and toffee), and chips.32,33 One study found confectionary intake to be associated with ECC only among children with poor oral hygiene (defined as brushing less than twice per day), which highlights the importance of both diet and hygiene in promoting good oral health.34

In terms of breakfast items, marmalade, jams, and honey are associated with increased ECC rates.33 Yogurt is associated with lower ECC rates and may confer additional benefits when consumed four or more times per week. The consumption of cheese and butter is not related to significantly lower ECC rates.35 Sweetened or unsweetened cereals are not significant risk factors for ECC.36

While the fermentable carbohydrate content of solid foods is important, frequency and timing of consumption are additional considerations in terms of ECC prevention. A high snack frequency is associated with ECC.37 Another study found that children with two or more between-meal snacks per day had higher ECC rates.38 Eating at bedtime is also associated with increased ECC.39

In summary, sweet snacks are associated with increased risk of ECC and should be limited to no more than twice a day. Yogurt may be protective against ECC. There is mixed evidence regarding cheese and ECC prevention. Bedtime eating should be discouraged.

A number of public health interventions have been tested to improve dietary knowledge of parents of young children. One study of Korean American parents of children younger than 6 evaluated whether a community-based educational intervention based on bilingual educational flipcharts could help to improve parents’ oral health knowledge and self-efficacy (individuals’ beliefs in their abilities to engage in the behaviors necessary to reach health goals).40 The intervention was a brief, 5-minute session in which a student walked parents through the flipchart. There were significant improvements in knowledge and self-efficacy. This study suggests that brief, culturally-tailored interventions have the potential to address parental knowledge gaps on the dietary risk factors associated with ECC and to empower parents.

A number of studies have tested educational interventions that encourage healthy eating.41–43 One Iranian study involved an education program in which clinical staff at public health clinics received training on how to provide parents with dietary advice about sugary snacks.40 The intervention lasted 6 months. Parents were randomized to one of three groups: 5 minutes of oral health education, an oral health pamphlet, and two phone call reminders about oral health instructions (intervention group); oral health pamphlet only; or control. Parents of children in the intervention group reported significantly lower sugary snack frequency than did parents of control children. Another intervention was conducted in Australia in which parents attended six, 1-hour interactive group counseling sessions with a dietitian and psychologist.41 Significantly larger proportions of children in the intervention group reported liking fruits and were exposed to more vegetables than children in the control group. In a child care center-based educational intervention in Florida, teachers were trained on how to talk to children about healthy eating, parents participated in a monthly educational dinner, and the center modified menus to encourage healthy eating.42 Staff at child care centers that served as controls provided similar levels of training on a nondietary topic. After 6 months, children in the intervention group consumed fewer junk food items, more fresh fruit and vegetables, and less juice during school time. In a fourth study, a 15-minute educational video based on the self-determination theory was shown to parents of young children, significantly improving the dietary behaviors of children.43 These studies indicate that educational interventions can encourage healthy eating behaviors among children.

In summary, diet-focused educational interventions have the potential to improve knowledge, self-efficacy, and behaviors. To reduce ECC rates, interventions need to involve repeated interactions with parents over time.

Children should not be given bottles filled juice or other sugary beverages. Weaning by age 2 may help to reduce ECC risk. The use of bottles and no-spill training cups should be discontinued by age 12 months. Children should use an open cup when drinking liquids to discourage constant sipping.47

Milk and plain water are preferred beverages for children. Per the American Academy of Pediatrics, 100% fruit juice should not be introduced to children until they are at least 1 year and intake should not exceed 4 oz to 6 oz per day.48 Clinicians may need to show parents how little fluid is contained within 4 oz to 6 oz so they can visualize the appropriate amount. Furthermore, the consumption of 100% fruit juice should be done at mealtimes because increased salivary flow helps buffer the effects of beverages’ natural sugars. For children who are eating solid foods, sugary snacks should be minimized and the number of between-meal snacks should be limited to two per day. Yogurt is worth encouraging in light of it appearing to provide protective benefits against ECC. Eating at bedtime should be discouraged.

At the community level, efforts have been ongoing to improve diet-related knowledge and behaviors to prevent ECC. Such interventions should be aimed at high-risk subgroups, including low-income children, racial and ethnic minorities, and children with special health care needs. While improving knowledge, skills, and self-efficacy is important, the ultimate goal of such interventions is sustained improvements in dietary behaviors and disease prevention. While brief interventions require fewer resources and may be easier to sustain, they do not typically lead to meaningful dietary behavior change or lower ECC rates. Given the complexity of dietary risk factors and behaviors, effective interventions will likely require repeated interactions with parents. These interactions may take place in multiple locations in the community (clinics, daycares, schools, homes, stores). Home-based dietary interventions are particularly relevant given that most children receive most of their snacks, meals, and beverages at home. Dietary interventions should focus on the essential behavior changes needed to reduce ECC risk and should be delivered by personnel who are culturally competent.48 Retail stores may need to be involved to encourage availability of healthier alternatives, like sugar-free beverages. There is also a need to evaluate outcomes associated with community-based interventions to ensure effectiveness and acceptability by the communities, families, and children. Intervention sustainability is also an important aspect of public health efforts that should be incorporated into the existing health care structure of a community. 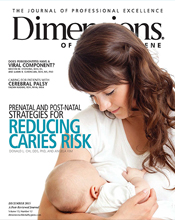