Vaccination is the newest form of prevention for this ubiquitous and potentially deadly virus.

Persistent infection with the human papilloma virus (HPV) is one of the main causes of cervical cancer.2 In the United States, nearly three out of four women between age 15 and age 49 will be infected with genital HPV in their lifetimes.3 Close to 5.5 million new genital HPV cases are diagnosed each year.3 Reducing HPV infection is the key to preventing cervical cancer deaths.

Currently, two vaccines are available to prevent HPV infection. In order to effectively advise their patients and make educated health care decisions themselves, dental hygienists need to understand the etiology of HPV and effective prevention methods, including the vaccine option (see sidebar). Dental hygienists have the opportunity to reduce transmission and mortality rates of HPV infections in their roles as preventive specialists.

HPV is double-stranded and DNA-based. It affects the epithelial cells of the skin and mucous membranes in various body sites.4 Since its discovery in 1971 by German scientist, Harald zur Hausen, more than 120 types have been isolated.5 Many of these types target specific epithelia and almost any area of the body can be involved. Normal cell division is regulated by two genes: p53 and Rb. The p53 gene functions in response to DNA damage.

When damage occurs, P53 stops the cell division and directs the genes involved in repair functions to make corrections. If corrections cannot be made, then p53 initiates apoptosis or a programmed cell death. This cell death ensures that the damaged cell will not replicate. In cancer cells, p53 is nonfunctional or damaged, thus reproduction of the abnormal cells occurs. HPV has eight genes that function within its life cycle. One of these is E6, which binds to the p53 and makes it inactive, allowing abnormal cells to replicate.

The other gene involved in cell division is Rb, which separates the transcription factors necessary for progression through the cell cycle. Rb acts as a tumor suppressor gene. The cell has to accumulate enough proteins to progress through the cycle. If it does not have enough, the cell cycle is stopped. The HPV E7 gene binds to the Rb causing it to release the proteins and initiating the cell cycle to continue. This causes uncontrolled cell division, which is what defines a cancer cell.

Most of the research about HPV has been conducted on the female genital tract.6 The first studies identified HPV 6 in 1981. Approximately 90% of genital warts are associated with HPV 6.7 In 1983, HPV 16, the variation linked with 50% of cervical cancers, was recognized.2 HPV 18, associated with 20% of cervical cancer cases, was identified in 1985.8 Cytologic changes have been seen in cells on Pap smears with precancerous and cancerous lesions since 1954—long before the viral link was established.9 The morphologic changes associated with these lesions are identified in routine Pap smears.

About 30 to 40 types of HPV are transmitted through sexual contact.3 Some types of HPV cause benign proliferative external lesions such as venereal warts or papillomas. These are classified as low-risk oncogenic types, while other types cause subclinical lesions, which lead to precancerous dysplasia or invasive cancer. The more significant lesions are attributed to types 16, 18, 31, 33, 35, and 45.10,11 In cervical cancer, 70% of the cases are associated with types 16 and 18.2 The specific types can be determined by using molecular diagnostic techniques such as polymerase chain reaction, ELISA, hybrid capture 2, and invader assay.

In addition to the routine Pap smear, Food and Drug Administration (FDA)-approved HPV testing can be performed on samples from the uterine cervix using two methods: Digene® from Qiagen and Cervista® from Hologic.12,13 The Digene method diagnoses 13 of the 15 types of high-risk HPV types that cause cervical cancer including: 16, 18, 31, 33, 35, 39, 45, 51, 52, 56, 58, 59, and 68. The Cervista method tests for 14 of the 15 high-risk types, adding 66. If any of these types are present in the specimen, the specimen is reported as “positive” for high-risk HPV.

There are two FDA-approved vaccines for HPV available in the United States. Both vaccinations are based on technology developed in part by National Cancer Institute scientists.

The first vaccine, Quadrivalent (Types 6, 11, 16, and 18) Vaccine, Recombinant (Gardasil® by Merck & Co) is approved for girls and young women aged 9 years to 26 years to prevent HPV types: 6, 11, 16, and 18, which cause 90% of venereal warts and 70% of cervical and vaginal cancers.14,15 It is approved for boys and young men aged 9 to 26 years for the prevention of genital warts caused by HPV types 6 and 11. Gardasil contains proteins from four types of HPV: 6, 11, 16, and 18. The proteins are purified and then used to make the vaccine. Because the vaccine contains only protein and not the entire virus, the vaccine cannot actually cause HPV infection.

Gardasil was tested on more than 21,000 women aged 15 to 26 years.16,17 Clinical trial results found that Gardasil was almost 100% effective in preventing precancerous cervical lesions, precancerous vaginal and vulvular lesions, and genital warts among women who were not already infected with the HPV variation found in the vaccine.16,17 Additional studies focused on girls and boys aged 10 to 15 years and young women aged 16 to 23 years.

A similar immune response was detected, indicating similar effectiveness.18 Gardasil does not protect against HPV types other than 6, 11, 16, and 18. The vaccine is only effective in the prevention of cervical  cancer, precancerous genital lesions, and genital warts due to HPV.14 The vaccine is administered intramuscularly in three doses. The initial dose is followed by the second at 2 months and the third at 6 months. Adverse reactions were evaluated in more than 10,500 women and girls who received the vaccination.19 Reactions experienced by the participants included side effects such as pain, swelling, itching, bruising, and redness at the injection site along with headache, fever, and nausea.19 Syncope (fainting) is another reported side effect, therefore, the manufacturer recommends observation for 15 minutes after administration.19 Gardasil should not be used to vaccinate pregnant women or those who are allergic to yeast or any component of the vaccine.

The effects of the vaccine have not been determined for children younger than 9 years, people with compromised immunity, HPV Bivalent (Types 16 and 18) Vaccine, Recombinant (CERVARIX® by GlaxoSmithKline) is the second HPV vaccine. It targets two types of the virus: 16 and 18.20 The vaccine is approved for girls and young women age 10 to 25 years. Three doses of the vaccine are required. They are injected intramuscularly with the initial dose followed by the second at 1 month and the third at 6 months. CERVARIX was tested in a study with 18,000 women participants, half of whom received the CERVARIX vaccine and half who received a hepatitis A vaccine as a control.21

CERVARIX does not protect against other HPV strains besides 16 and 18 and it is only effective in the prevention of cervical cancer and cervical dysplasia.20 CERVARIX should not be used to vaccinate pregnant women or women who are allergic to yeast or any component of the vaccine. Efficacy of the vaccine has not been determined in individuals with compromised immune systems. The most common reported side effects are: pain, redness, and swelling at the injection site and fatigue, headache, myalgia, gastrointestinal symptoms, and arthralgia.20 The manufacturer recommends observation for 15 minutes after administration in case syncope is experienced.20

The FDA deemed both Gardasil and CERVARIX safe when it approved them for use in 2006 and 2009, respectively. The CDC and FDA closely monitor the safety of all vaccines through three systems: Vaccine Adverse Event Reporting System, Vaccine Safety Datalink, and Clinical Immunization Safety Assessment Network.23 The systems monitor adverse events caused by vaccines in addition to rare adverse events that often are not identified during the clinical trial phase of evaluation.

The safety of Gardasil was questioned in 2009 and the FDA did an extensive review of data collected by the Vaccine Adverse Event Reporting System about the 23 million doses administered from 2006 to 2008. The review found 12,424 reports of adverse effects experienced after vaccination with Gardasil. Out of the more than 12,000 events, 93.8% were noted as nonserious and 6.2% were deemed serious.24 The review determined that overall the rates of adverse effects were not higher than those of other vaccinations with the exception of syncope (fainting) and venous thrombeombolic events. However, both the FDA and CDC assert that Gardasil is safe and effective and that its benefits outweigh any potential risks.14,24

Limitations exist for both the Gardasil and CERVARIX vaccinations, including the fact that neither HPV vaccine provides complete protection against persistent infection with types of HPV outside of their target focus. Therefore, these vaccines will not prevent about 30% of cervical cancers. In the case of Gardasil, 10% of genital warts will not be prevented by the vaccination. They also don’t provide protection against other sexually transmitted diseases. As such, women and girls who receive the vaccinations still need to undergo the recommended cervical cancer screenings.14,21

The CDC recommends that all girls and women age 11 through 26 years receive three doses of HPV vaccine over a 6-month period to reduce their risk of cervical cancer and genital warts, and that boys and men age 11 through 26 years be vaccinated with Gardasil to reduce their likelihood of developing genital warts. Dental hygienists often have the most contact with patients and should be well-versed in pertinent health topics. And as the relationship between oral cancer and HPV becomes better understood, the vaccines may also play a more direct role in the provision of oral health care.

Joyce Z. Downs, RDH, MS, is a full-time instructor at the School of Dental Hygiene at Old Dominion University (ODU), Norfolk, Va. She is also a doctoral student in Health Services Research and a graduate research assistant at the Virginia Modeling, Analysis, and Simulation Center, at ODU.

Sophie K. Thompson, MHS, CT(ASCP)(IAC), is chair of the School of Medical Laboratory and Radiation Sciences and director of Anatomic Pathology Programs, Cytotechnology, and Histotechnology at Old Dominion University (ODU). Her research interests include HPV, asbestosis and mesothelioma, malignant melanoma, and adenocarcinoma of the lung.

Xerostomia from the Beginning 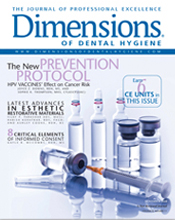