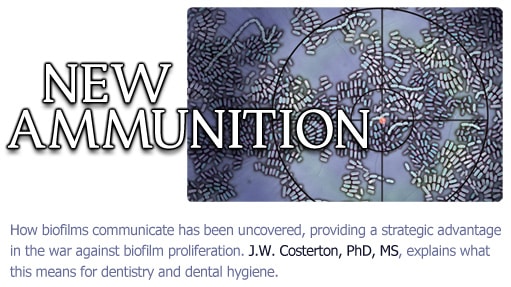 How biofilms communicate has been uncovered, providing a strategic advantage in the war against biofilm proliferation. J.W. Costerton, PhD, MS, explains what this means for dentistry and dental hygiene.

Q. How has our view of dental plaque evolved into oral biofilm?

A. Well, dental plaque was actually described very early on soon after Anton van Leeuwenhoek invented the microscope in 1675. In the early 1700s, scientists took what he called “scuff” from his teeth and so the first sessile (attached) populations were discovered.

Researchers at the Forsyth Dental Institute in Boston began to study the microbial part of plaque in the 1950s. In 1978, I proposed in the journal Scientific American that all of the dental communities that grow on surfaces, not just teeth, should be called biofilms. I explained that they should be looked at as a common type of community because bacteria don’t know where they are—whether they’re living in a mouth or on a rock in a stream. Biofilm is a unifying term, thus it began to replace dental plaque, but nothing has changed except the terminology.

Q.How are bacteria distributed within a biofilm?

A. In a mixed population of bacteria growing in a matrix mass, a cell of a certain type may find itself in a comfortable environment and begin to divide repeatedly to form a “clonal group” of identical “sisters” in the same area of the biofilm. These clonal groups are all produced by replications of a successful bacteria cell. A cell that is unsuccessful in a part of the biofilms will probably die off and leave a bit of a hole in the biofilm. This is an evolution of the biofilm, where the most successful species make these clones (Figure 1).

Q. What does this mean for bacteria reduction?

A. If you have bacteria in a comfortable environment like the mouth, they can double every 20 minutes. If they are in satisfying spots in the matrix material, such that they are duplicating every 20 minutes, then the biofilm will reform quite quickly when you remove it.

Q. Are there any new antimicrobial agents that show promise in penetrating biofilm?

A. As we study biofilm, we’ve found that antibiotics penetrate biofilm quite well. However, the bacteria growing in the biofilm express all kinds of different genes. Almost all currently used antibiotics are designed to kill the planktonic (floating cells) phenotype (pattern of genes expressed by a cell living under certain conditions) and nothing else, thus antibiotics don’t do well against biofilms. Biofilm has a different gene expression pattern.

New antibiotics are in development that work against biofilm cells but don’t work particularly well against the floater type of bacterial cells. Several companies will be coming out with these in the near future.

By far, the most exciting development in recent times is the discovery that the bacteria in these biofilms are talking to each other with a chemical language. We call this “signaling.” Wherever a biofilm and bacteria exist, they’re talking to their own clonal group and they’re also talking to their neighbors by releasing chemical hormone-like compounds. The revolutionary concept in biofilm research is that we may be able to manipulate biofilms so that we can stop them from forming in some cases, make them grow slower in other cases, and persuade them to actually detach from the biofilm and swim away.

Q. Would this be accomplished through something topical?

A. Yes. These signals penetrate quite well in the biofilm. For instance, think of a biofilm that’s composed of 30% cells and 70% matrix, which we’ll call species A. A toothpaste could be created that contained a signaling compound that said that species A shouldn’t form a biofilm, so if all the other bacteria are forming a biofilm, species A would be left out.

The bug Fusobacterium nucleatum is thought to be the beginning of gingivitis. If it could be persuaded to not come into biofilm and instead just float around, then this would be a biofilm inhibitor signal. The most exciting discovery right now was made by David Davies, PhD, from the State University of New York, Binghamton. He found a detachment signal where bacteria in biofilms are instructed by this signal to dissolve away the matrix around themselves and just swim away. He is currently consulting with dental companies about products that could contain a detachment signal.

Q. How close are we to seeing a product that contains a detachment signal?

Another important development is using the signal for people who become overwhelmed by bacterial infections. If we can determine how to signal the biofilm to grow slowly, these devastating infections could be eliminated.

These signals were discovered in the 1970s but were thought to only work in marine organisms. The signals were generally found in all bacteria in the 1980s and ’90s. We knew the bacteria were getting signals from each other. Then, the brilliant idea was hatched that maybe these signals existed in nature, because some plants, particularly marine plants, never develop biofilms. Some Australian researchers looked at red algae and found that there was no biofilm there. Then they found the chemicals that stop the biofilm from forming, and lo and behold, they were signal inhibitors. So the plants had been producing these inhibitors for a long time, stopping biofilm formation on their surfaces. Research is being done on orchids that grow in a jungle in Gambia, Africa. In one species of orchid we found eight different biofilm inhibitors. This is how the orchids keep themselves clean in a microbial jungle.

Q. Do you think it’s possible we might see some of these advancements in practice in 5 or 10 years?

A. I’m thinking 10 years, because they have to get through the Food Drug Administration. For example, if you put a detachment signal into the gingival crevice, how do you keep it from signaling to the good bacteria that your body needs? If you start detaching bacteria right and left, you could get yourself into all kinds of trouble. Basically, the detachment signal can only work in the gingiva and not any other parts of the body.

This will revolutionize dentistry. It’s so intriguing when we thought that plaque was just a biofilm and all of the bacteria within biofilm were independent. Now we know that they communicate. We have also discovered that they’re all connected with little electrical connections running from one to the next, called nano-wires. We find them running between the cells and we may be able to use electricity to disrupt the power they are trading back and forth.

The whole consequence of the biofilm growing as a community means that we may be able to interfere with the community through its communications system or the power grid. This offers up all kinds of possibilities.

Q. How quickly do periodontal pathogens recolonize in a deep pocket after initial debridement or antimicrobial disinfection?

A. It’s difficult to tell how quickly calculus regrows because it is calcified biofilm so the process is slower than a biofilm regrowth. Biofilm will come back within a matter of weeks. Calcification of a biofilm might take months.

Q. There is evidence that we never totally eradicate the pathogens from the pocket. Is this because they’re harbored in the tissue, the root surface, residual calculus, on the root, or all of the above?

A. All of the above, because a number of the really nasty pathogens aren’t just on the root surface, they’re actually imbedded in the gingival tissue the cells on the gum’s side. So you can’t eliminate them with scaling or root planing. These pathogens seem to cause most of the inflammation. 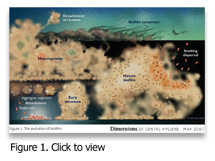 Q. How do we know when we’ve removed enough pathogens to control the disease?

A. After scaling and root planing is completed, regrowth of periodontal pathogens does occur at some point. If this is supported with a chemical cleaning at the same time as the mechanical removal, more time may exist before a reoccurance. When dental hygienists perform scaling and root planing, they can’t get into every last little fissure, but all fissures may be reachable with a chemical.

Q. Is bleeding on probing our best clinical indicator that the pathogens are at a very low level?

Q. Do we have a good indicator?

A. We’re starting to get one. A Canadian company is producing a probe that will show the presence or absence of calculus with the reflection of light.*

It distinguishes between a clean tooth surface and calculus, because calculus has a different reflection. So as the instrument is moved around in there, it will be clear if the calculus is gone or there’s still some there.

Q. How important is thorough removal of calculus from the root surface?

A. It is absolutely essential. If any substantial amount of the biofilm is left, the same infection will return in a couple of months.

Q. Which area of research do you think is more promising: ways to remove biofilm once it has formed or to prevent it from forming in the first place?

A.  Prevention is by far the best of the alternatives. I think a biofilm inhibitor as a simple addition to a toothpaste or mouthrinse that would impact the known caries organisms, like Streptococcus mutans, and periodontal organisms, like Porphyromonas gingivalis, is the most effective idea.

When addressing acute periodontitis, a combination of the three ideas might be best—mechanical removal, chemical cleaning, and the dispersal signal.

J. W. Costerton, PhD, MS, is the director of the Center for Biofilms, University of Southern California School of Dentistry, Los Angeles. He is an international expert on biofilm and has lectured and written extensively on the subject. In 2005, he received the Procter & Gamble Prize in Environmental Microbiology and was elected to the Royal Society of Canada, Life Sciences Division. 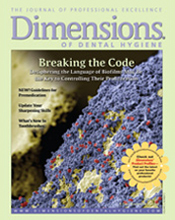