New Addition to the Caries Armamentarium

While caries prevention is an off-label use, silver diamine fluoride holds great promise in reducing the most common chronic disease of childhood.

As oral health prevention specialists, dental hygienists have a keen appreciation of the prevention armamentarium of which therapeutic agents are a vital component. They are especially critical for patients at high risk of disease and those with limited access to dental care. Fluoride varnish (5% sodium fluoride), in particular, has been used extensively in both public and private dental settings. It is considered a safe agent for the delivery of fluoride ions to the enamel and dentin, resulting in remineralization of tooth structure, reduction of caries risk, and treatment of dentinal hypersensitivity.1

The United States Food and Drug Administration’s (FDA) official labeled use for 5% sodium fluoride varnish is as a “cavity liner and/or dentinal desensitizer,” and application for caries prevention and remineralization of incipient lesions in the enamel is considered off-label use.2 Off-label drug use involves prescribing medications for an indication in which the drug/device has not received FDA approval.3 Fluoride varnish, classified as a Class II medical device, can be used for treatment indications that are not included in the product’s approved labeling. Its use for off-label purposes is dependent on clinicians’ professional judgment.2,3 According to the American Academy of Pediatrics, the labeling is not intended to interfere with oral health professionals using their clinical judgment to provide the best possible care to patients or to add liability for off-label use.4

The most widely accepted explanation of dentinal hypersensitivity is the hydrodynamic theory, in which pain results from fluid within the dentinal tubules either contracting or expanding, causing a nerve response from the cells lining the pulpal wall. This sensitivity manifests as a sharp, brief pain and is most commonly triggered by changes in temperature, chemical, osmotic, evaporative, and tactile stimuli. Habits such as drinking cold beverages and eating acidic foods are the most commonly identified causes. Common treatment options include occluding the dentinal tubules, which are usually 0.5 microns to 2 microns in diameter, or lowering the nerve excitability threshold.8

The principal mechanism of 5% sodium fluoride varnish in relieving dentinal hypersensitivity is its chemical ability to reduce and block fluid movements in the dentinal tubules through formation of the calcium–phosphorous precipitates: calcium fluoride and fluorapatite. Fluoride ions bind with hydroxyapatite to form calcium fluoride, which, in turn, occludes the exposed dentinal tubules. Demineralized hydroxyapatite slowly transforms into fluorapatite.1 When exposed to an acidic environment, fluorapatite is less susceptible to dissolution than hydroxyapatite.1,8 The fluoride ions in 38% silver diamine fluoride work in the same fashion, but the silver ions contribute to additional modes of action. The supplemental actions of the silver ions in silver diamine fluoride contribute to its effectiveness as a desensitizer through the formation of silver phosphate, which can also occlude the dentinal tubules. There may be a common factor between the mechanism of desensitization and arrest of dental caries. This desensitization action by occlusion and remineralization of dentinal tubules illustrates a similar potential for the caries-arresting effect of silver diamine fluoride.7,9

In addition to the formation of silver phosphate from the application of silver diamine fluoride, available silver ions exert antibacterial properties, thereby inhibiting and potentially arresting the caries process. While fluoride aids in the creation of fluorapatite, 38% silver diamine fluoride has a much higher level of fluoride ions (44,800 ppm) compared to 5% sodium fluoride varnish (22,600 ppm), as well as the silver ions that contribute to its efficacy. Silver ions have an antibacterial effect on oral pathogens, including those responsible for dental caries.10,11 Silver has a deleterious effect on multiple bacterial biological functions, including DNA replication, maintenance of cell wall integrity, inhibiting respiration processes, and interference with thiol groups. Interestingly, recent research indicates that silver particles can persist largely unchanged after exerting a lethal effect on bacteria—the dead bacterial cells act as a reservoir for the silver ion particles. As silver ions are released from this reservoir of dead cells, they become bactericidal to immediate surrounding pathogens.11 Figure 1 and Figure 2 show a caries lesion before and after treatment with silver diamine fluoride.

Another therapeutic quality of silver ions in silver diamine fluoride is the formation of sclerotic dentin through the configuration of calcium fluoride and silver phosphate—a hard and impenetrable dark brown or black layer. It is this darkening of the tooth structure that is diagnostic for demineralized lesions and indicates arrest of active caries. Sound enamel is not discolored by the application of silver diamine fluoride. The staining of lesions, similar to naturally arrested caries lesions, is considered a primary disadvantage of the use of silver diamine fluoride in dentistry. When arresting caries in the primary teeth, the black staining ceases to be an esthetic issue upon exfoliation.6 Other adverse effects, such as pulpal and tissue irritations, have not been substantiated in the literature.12

Dental caries persists as a significant health problem around the globe. As with other health disparities, individuals with limited resources carry the heaviest burden.13 Silver diamine fluoride has been used for decades in other parts of the world, including Australia, Great Britain, Africa, South America, and Asia. Like other fluoride vehicles, 38% silver diamine fluoride can remineralize tooth structure and arrest caries while also reducing demineralization of both coronal and root structures.14–17 Furthermore, 38% silver diamine fluoride has demonstrated higher efficacy in arresting dentinal caries compared to 5% sodium fluoride varnish.10

In a study of Chinese preschool-age children, sodium fluoride varnish was applied to subjects’ anterior caries lesions, while another group of children received an annual application of sodium diamine fluoride. Results showed that the sodium fluoride application was significantly less effective than the 38% ­silver diamine fluoride in preventing new caries lesions and arresting existing ones.16 Similarly, Yee et al18 found that a one-time application of 38% silver diamine fluoride was effective in arresting caries in the anterior and posterior primary teeth of Nepalese schoolchildren with 50% of caries lesions becoming arrested after 6 months. However, these lesions became active again over the following 2 years, suggesting that a single application is not enough to maintain an arrested caries state.18

Performing restorative procedures on young children can be difficult due to their limited ability to tolerate lengthy and perhaps uncomfortable procedures. Arresting caries in young children through nonsurgical methods affords the opportunity to halt disease progression and preserve remaining tooth structure. The use of silver diamine fluoride is ideal for pediatric and public dentistry due to its easy application and low cost. It is applied with a microsponge only to suspected lesions, and all teeth receive silver diamine fluoride’s preventive benefits. Also, primary teeth have thinner enamel and a greater organic component than permanent teeth, making them more susceptible to caries.20 As the primary teeth play an extremely important role in the ability of a child to eat well, speak properly, experience normal jaw and facial development, and permanent tooth eruption, it is critical to arrest the caries process in the primary dentition.

Monika Alcorn, RDH, MS recently earned a Master of Science in Dental Hygiene from Idaho State University (ISU) in Pocatello. Working in private practice for the past 7 years in Portland, Oregon, Alcorn also has an expanded practice permit in the state of Oregon.

Tara Johnson, RDH, PhD, is an associate professor of dental hygiene at Idaho State University in Pocatello, where her research focuses on pharmacology and chemoprevention of oral cancer. Johnson has presented papers at national and international professional meetings, and serves on the Idaho State University Institutional Review Board. She can be reached at: [email protected]

A Picture Is Worth a Thousand Words 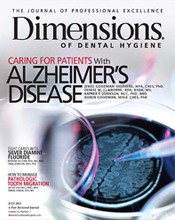