Orthodontics can be used to address problems associated with tipped and ectopically positioned permanent molars.

By Ricky E. Harrell, DMD, MA On Apr 11, 2013 0
PURCHASE COURSE
This course was published in the April 2013 issue and expires April 2016. The author has no commercial conflicts of interest to disclose. This 2 credit hour self-study activity is electronically mediated.

An ectopic eruption of a permanent first molar often results in either an unerupted or partially erupted tooth. In these cases, the permanent first molar tips mesially and is thus unable to erupt due to physical entrapment by the distal contour of the deciduous second molar. An ill-fitting stainless steel crown on a second deciduous molar can also prevent the permanent first molar from erupting by creating a “ledge” that entraps it. Figure 1 demonstrates an ectopically erupting #3 molar that is caught under the ledge created by the stainless steel crown on #A. Figure 1A and Figure 1B illustrate its subsequent uprighting with an elastomeric separator and placement of a maxillary space maintenance device.

The potential problems with partially erupted or unerupted second molars are commonly seen when adolescent patients are transitioning from a pediatric dental practice into a general dental practice. Dental hygienists are often the first oral health care professional to observe, recognize, and report these problems so they can be effectively treated.

Pericornitis is often associated with partially erupted second molars, especially in the mandibular arch. Dental hygienists can treat this problem with debridement and irrigation with various therapeutic agents including normal saline, diluted hydrogen peroxide, and chlorhexidine, as recommended by a dentist. Orthodontic solutions to these problems are focused on uprighting the second molar with fixed orthodontic appliances, which can be difficult due to their position. It is also challenging to clean the area while the tooth movement is occurring with appliances in place. Dental hygienists need to educate these patients on the proper techniques for keeping these areas clean and minimizing problems due to inflammation and lack of plaque control. Figure 9 to Figure 12 illustrate how second molars can be uprighted orthodontically. In this case, the treatment was completed over 21 months. Note the proximity of the appliances to the tissue and the change in the interproximal bone level between #30 and #31 as the second molar uprights. Excellent oral hygiene is paramount to the success of this treatment.

When a second deciduous molar is lost prematurely in patients with mixed dentition, and there is no space maintenance provided (Figure 13) or the second deciduous molar is ankylosed (when a tooth fuses to the bone because of trauma or disease), and the first molar tips mesially over the ankylosed tooth, serious consequences can result. With the loss of the second deciduous molar and tipping of the permanent first molar, the options are to accept the presence of the unerupted second bicuspid; extract the unerupted second bicuspid, which can harm the posterior occlusion of the affected side and the osseous support of the adjacent teeth; or upright the permanent first molar and erupt the second bicuspid, which, in an older patient, may require a surgical exposure and forced eruption.

In the case seen in Figure 13 to Figure 17, the mandibular first molar was orthodontically uprighted and, fortunately, the second bicuspid erupted on its own. The uprighting procedure of opening the space and eruption of the second bicuspid took approximately 15 months of orthodontic treatment with fixed appliances. The restored occlusion is demonstrated in Figure 17. Other than restoring proper occlusion, the height of the bone level on the mesial surface of the mesial root of #30 rose with the eruption of #29 (compare Figure 13 to Figure 17). The prognosis for continued periodontal health is also improved as the interseptal bone width is now more at the occlusal level for both the mandibular first molar and the first bicuspid.

The presence of ankylosed primary molars also presents a problem in the management of tipped molars. Ankylosed second deciduous molars have long been a concern for orthodontists, because they cause mesial tipping of the permanent first molar distal to the submerged second molar.1,2 There are various theories regarding the etiology of ankylosis of the primary molar but the current consensus is that the infra-occluded primary molar, in addition to allowing tipping of the adjacent permanent molar, can also lead to significant bone loss on the adjacent root of the adjacent permanent molar.3

Ankylosed second deciduous molars are more problematic than ankylosed first primary molars because the first permanent molar will often tip mesially and either prevent nonsurgical extraction of the ankylosed second deciduous molar or eventually block eruption of a second premolar. Whether intervention in the presence of ankylosed primary molars is necessary is controversial. Kurol reported that nonintervention is appropriate in most cases.4,5 However, negative outcomes in the adult dentition when ankylosed primary molars are not addressed have also been reported.6 The decision to intervene should be made on an individual case basis after evaluating all relative information.

Tipped molars in adult patients are problematic, as well. The presence of a nonreplaced permanent first molar with tipping and lingual rotation of the second molar into the extraction space is the most common presentation. In the case of a tipped second molar into the first molar extraction space, the uprighting of the second molar can be described as “facilitative orthodontics” or “adjunctive orthodontics,” where orthodontic tooth movement facilitates prosthodontic restoration of the missing tooth. However, facilitative orthodontics is not done solely to improve the path of insertion for a prosthesis, but also to establish physiologic alveolar crest topography, often on the mesial root surface of the tipped molar. The uprighting of these tipped molars can sometimes eliminate the need for periodontal surgery.6

Hirschfeld first reported the theory that the relationship of a tooth to the alveolar process could affect both the size and shape of the supporting periodontal tissues in 1923.7 In the 1950s, practitioners began to hypothesize that the tooth could be used as an attachment to move and remodel bone, in other words, molar uprighting could move the bone coronally as the tooth moved into a more upright position.6

Correcting the tipping of a second molar most often involves orthodontic uprighting with either removable or fixed appliances. Maintaining periodontal health around the tooth that is being uprighted is critical. Mobility of the tooth being uprighted in an adult patient is almost unavoidable, but by maintaining good oral hygiene in this area, inflammation may be limited and the mobility reduced.

Whether the uprighting of a molar resolves a bony defect or if the bone merely flattens as the tipped molar is uprighted is still unclear. Although this subject has been studied for many years, it is still uncertain if the bone merely follows its attachment to the tooth and moves vertically as the tooth uprights, or if the reduction in pathogens due to the uprighting of the tooth and good oral hygiene cause the change in the alveolar topography. Milram and Murphy advocate for molar uprighting to resolve vertical bony defects.6 Lundgren et al found that molars tipped as long as 30 years did not increase risk for moderate periodontal disease at the mesial surface.9 Wehrbein and Deidrich found no mesiomarginal bone levels between tipped and upright molars in young adults. However, they observed a higher level of supra and subgingival plaque, more inflammatory cells and capillaries, and a lower density of gingival fibers mesial to the tipped molars. The plaque-induced inflammatory infiltrates on the tipped molars apparently affected the bone levels on the distal aspect of teeth mesial to the tipped molars.10 Orthodontic uprighting may improve these conditions. Tipped molars, whether unerupted, partially erupted, or completely erupted, can cause significant oral health problems. Dental hygienists play an important role in the detection, evaluation, and treatment of these issues, improving the oral health of their patients.

Ricky E. Harrell, DMD, MA, is program director at the Georgia School of Orthodontics in Atlanta. A diplomate of the American Board of Orthodontics, he is also a member of Dimensions of Dental Hygiene’s Peer Review Panel. 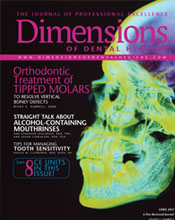