Pit and fissure sealants are highly effective in caries prevention and with advances in materials, the technique is even more integral to the fight against tooth decay.

By John O. Burgess, DDS, MS On Oct 18, 2012 0
PURCHASE COURSE
This course was published in the October 2012 issue and expires October 2015. The author has no commercial conflicts of interest to disclose. This 2 credit hour self-study activity is electronically mediated.

This course was developed in part with an unrestricted educational grant from Shofu Dental Corp.

Dental caries is widespread in the United States. In 2004, 42% of American children and young adults age 6 to 19 had decayed or restored permanent teeth.1 By 2010, dental caries among children age 2 to 4 increased from 19% to 24% with the most significant gains seen in middle class children and among boys.2 About 90% of carious lesions are found in pits and fissures of permanent posterior teeth.1

Pit and fissure sealants are part of a conservative but effective caries prevention approach,3–5 especially among high-risk populations. Sealants prevent caries initiation and arrest progression by providing a physical barrier that inhibits microorganisms and food particles from collecting in pits and fissures.1 The efficacy of sealants most likely depends on their long-term retention.

The efficacy6–11 and cost-effectiveness of sealants in reducing occlusal caries in molars is well documented in high caries risk subjects, but lacking in lower caries risk groups. Caries reduction in children and adolescents after placement of resin-based sealants ranges from 86% at 1 year, 78.6% at 2 years, and 58.6% at 4 years.12 Another clinical study13 evaluated 1,204 resin sealants applied in 148 patients 11 years post-placement and found that 41.3% of the sealants were fully retained while 11.4% had been replaced. Failure rates were significantly higher among high caries risk individuals compared to low risk patients. When sealants are defective, reapplication significantly improves their clinical performance, probably by maintaining their seal.

Some dental professionals are unsure whether sealants can arrest caries if the lesion is noncavitated but sealed. Griffin et al14 used meta-analysis to examine sealant effectiveness in preventing caries progression in permanent teeth, concluding that sealing noncavitated caries in permanent teeth is effective in reducing caries progression. Sealants placed over noncavitated carious lesions significantly reduced progression of caries in children, adolescents, and young adults for as long as 5 years after placement, when compared to unsealed teeth.12 Despite the large body of evidence supporting the efficacy of sealants in preventing caries and significant improvement in the materials used, sealants are an underutlized technique in private practice. This resistance is related to several factors: dentists’ training and reimbursement is based on restoration rather than prevention, lack of confidence in long-term sealant retention, difficulty in diagnosing pit and fissure caries, and concern about sealing over caries.

The most popular pit and fissure resin sealants contain bis-GMA resin or urethane dimethyacylate (UDMA). Bisphenol A (BPA) or BPA-based epoxy resins are used in the manufacture of dental resins, polycarbonate plastics, and the inner coating of food cans. The safety of BPA has come into question because it replicates estrogen and may initiate hormonal responses. BPA is a precursor to the resin monomer bis-GMA found in many dental sealants. During manufacturing of bis-GMA dental sealants, BPA might be present as an impurity or as a by-product of Bis-DMA created by the action of salivary enzymes.16 Although small amounts of salivary BPA have been detected in some patients immediately after application of certain sealants, systemic BPA has not been detected when BPA-containing sealants were placed, nor has the production of estrogen been found in response to low levels of BPA exposure.17–19 Leaching of BPA from resins can occur during the initial setting period, especially from the air-inhibited layer on the cured surface of sealants. To reduce the amount of BPA, the air-inhibited layer (the oily film on the surface of cured sealants) should be removed with moistened gauze immediately after light-curing. Resin sealants made from UDMA do not contain BPA.20,21

Resin sealant retention may be increased by applying a bonding agent between the enamel and the sealant.15,22–24 In vitro studies15,22 demonstrated reduced leakage and increased retention in primary and permanent teeth when a bonding agent was placed prior to sealant application. Clinical studies23,24 confirm these findings and report increased sealant retention when total etch bonding agents are applied prior to sealant placement. The use of single bottle total etch adhesives where the tooth is etched and rinsed, the adhesive is applied and dried, and then the sealant is applied and light-cured is recommended. Since bonding agents are more hydrophilic than the sealant, the bonding agent penetrates the pits and fissures better, improving retention due to the increased wetting of the adhesive compared to the hydrophobic sealant. Recently, self-etching adhesives have been successfully used to etch and prime the enamel surface prior to sealant placement.25,26 These materials eliminate the etching and rinsing involved with total etch systems and reduce application time.

Self-etching primers have a higher pH, with a range of 0.7 to 3.7, compared to phosphoric acid, which has a pH of 0.3. The higher the pH, the less the material etches the enamel surface. Two separate clinical studies23,24 compared sealant retention using self-etching agents with total etch single bottle bonding agents. Both increased sealant retention in isolated and contaminated conditions, but the self-etching sealant seemed to be less sensitive to moisture than the total etch single bottle adhesive. Glass ionomer sealant materials are hydrophilic and fluoride releasing. They bond chemically to the tooth and recharge their fluoride release27 from exposure to topical fluorides. However, the cariostatic effect of glass ionomer sealants has been challenged, and two reviews28,29 reported that glass ionomer sealants offered few cariostatic benefits when compared to resin sealants. In clinical trials, resin sealants have significantly greater longterm retention rates than glass ionomer sealants.30,31 Glass ionomer sealants have improved retention when moisture contamination is possible and should be placed in patients with poor self-care or in a partially-erupted tooth where isolation is impossible.32 Transitional glass ionomer sealants applied to erupting teeth should be carefully monitored and replaced, when isolation is possible, with resin-based sealants. Table 1 provides a list of the most commonly used sealant products. 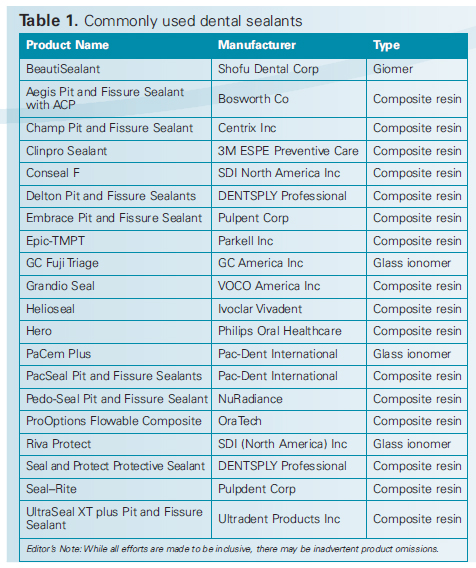 A new fluoride-releasing, HEMA- and BPA-free resin sealant material that contains surface pre-reacted glass ionomer (PRG) filler particles is now available. This light-cured resin sealant is a giomer33 (glass-ionomer and polymer) because it uses PRG technology to produce glass ionomer fillers in a resin matrix. The PRG filler used in giomer sealants is made by reacting fluoride-containing glass with an aqueous solution of polyalkenoic acid.33

The giomer fillers release ions that remineralize and neutralize plaque acid. Shimazu et al34 evaluated the fluoride released initially and after recharging from three resin sealants, including a giomer sealant. Initially, fluoride was released from all sealants, but significant fluoride recharging was provided only with the giomer sealant.34 The giomer sealant is the only resin that can be recharged with fluoride. Higher fluoride release is generated by glass ionomers compared to giomers but the fillers in giomer sealants are distinctive in that they buffer lactic acid from a pH of 4 to neutral by releasing alkaline ions. This novel approach to decreasing caries—by releasing alkaline ions from a sealant—contributes to diminished plaque accumulation around the sealant.35

The giomer sealant is a radiopaque, light-cured, fluoride-releasing, pit and fissure sealant using a self-etching primer that eliminates the phosphoric acid etching and rinsing steps required by total etch sealants. The primer contains acetone, water, carboxylic acid, phosphonic acid monomers, and PRG fillers to increase enamel and dentin adhesion and maintain fluoride release. Recently, Dynamic SIMS analysis indicated that the fluoride released from the PRG fillers in the adhesive penetrated dentin through the bonding interfaces. Fluoride released from the adhesive can penetrate into the preparation, providing desensitizing and remineralizing properties. The giomer sealant is simple to apply, and syringe placement produces a smooth, bubble-free sealant with precise placement.

The process of placing a giomer sealant is quite simple and requires fewer steps than traditional sealants, which may reduce the potential for error—improving the sealant’s long-term efficacy. Before placing a giomer sealant, the tooth should be cleaned and isolated (Figure 1). The self-etching primer should be dispensed and applied to the enamel surface of the pit and fissure using a microbrush, left undisturbed for 5 seconds, and then gently air dried (Figure 2). The giomer sealant is placed with a syringe into the pit and fissure (Figure 3), light-cured, and then adjusted as needed (Figure 4).

Dental caries is a global epidemic and dental professionals must use all the tools available to combat this serious threat to oral and systemic health, including dental sealants. With advancements in sealant materials and solid evidence of efficacy, dental sealants are key to the caries prevention armamentarium.

John O. Burgess, DDS, MS, is assistant dean for clinical research and director of biomaterials at the University of Alabama at Birmingham School of Dentistry. In 2010, he received the Hollenbeck Award for outstanding work in operative dentistry in biomaterials. A prolific researcher, Burgess has authored more than 400 articles, abstracts, and book chapters. Currently, he serves as a consultant to the American Dental Association's Council on Scientific Affairs and is active in clinical evaluations of dental materials.

General Anesthesia in the Treatment of Early Childhood Caries

The Downside of Sports and Energy Drinks 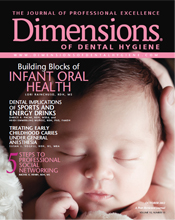