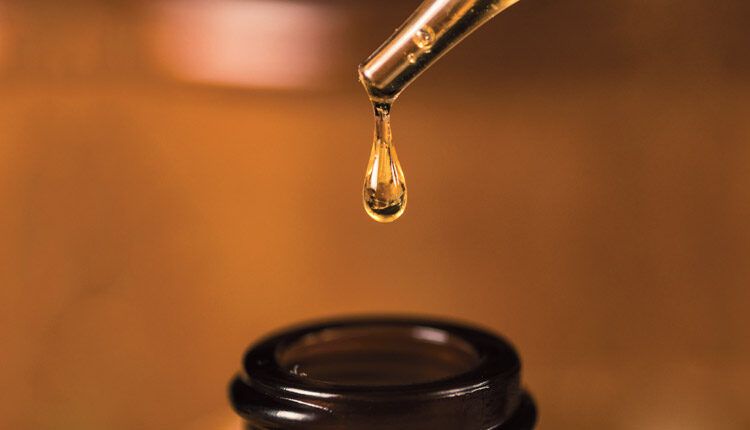 Fluoride is the gold standard when it comes to remineralization, however, alternative therapies are available, including natural approaches.

Biomineralization is a lifelong, complex process by which the body produces minerals in order to strengthen existing hard structures.1 When the pH homeo-stasis of the body becomes disrupted, the result may be demineralization of hard tissue, such as tooth and bone, or a precipitation of minerals, such as in the development of kidney stones or gallstones.2

Enamel is a predominately inorganic material; a plethora of calcium hydroxyapatite crystals make up the enamel layer.3,4 These crystals are exceptionally large and strong, making them capable of withstanding the numerous forces placed upon them, day after day and meal after meal.4

Hydroxyapatite, however, is prone to dissolving with repeated acid exposure, which can lead to carious lesion development when cariogenic bacteria are present.5 When hydroxyapatite is dissolved in response to acid exposure, calcium is removed from the tooth structure, leaving it demineralized.3 Enamel begins to demineralize when the oral pH drops below 5.5, which can occur regularly, especially when patients have diets high in carbohydrates or are prone to snacking.6 However, the following systemic influences are critical in determining pH: acid reflux, xerostomia, frequent vomiting, a low baseline salivary pH, or medication usage. These factors can lead to chronically low intraoral pH, thus, demineralization will be prevalent. Therefore, while diet is a critically important controllable factor in the mineralization process, it is not the sole influencing factor (Figure 2).6

While the oral cavity is regularly in a state of demineralization, the body compensates for this. Human saliva is rich in calcium hydroxyapatite, which is absorbed by tooth structure to replace minerals lost during acid exposure. While this will not totally prevent the progression of demineralization, it can partially counteract the frequent drops in oral pH that come with diet and systemic complications. Over time, with constant demineralization of the enamel surface, eventually so many minerals are lost that the enamel will be unable to remineralize purely based on the available calcium hydroxyapatite found within saliva. When the patient’s enamel deteriorates to this point, the clinician will need to implement an additional medicament to assist in the remineralization process.

Fluoride Use for Enamel Remineralization

Fluoride has remained the lifeline for dental professionals when combatting demineralization. Fluoride works by influencing enamel integrity in three ways:

While fluoride has many benefits, it does have some clinical limitations, such as the inability to infiltrate cariogenic biofilms. An in vitro study found that the application of fluoride in combination with L-arginine specifically addressed this particular concern, and the combination demonstrated superior enamel remineralization compared to fluoride alone.9 L-arginine also assisted in improving pH homeostatis, resulting in a decrease in demineralization frequency.9

Fluoride dentifrice may also be more effective at enhancing remineralization when tricalcium phosphate (TCP) is added. TCP has been found to delay calcium from interacting with ionic fluoride, which allows more fluoride and calcium ions to be delivered to the demineralized enamel.10,11

Even though fluoride comes with decades of evidence-based support, some patients are becoming more hesitant about fluoride exposure.12,13 Patient concerns range from fluorosis to a desire to follow holistic healthcare recommendations by rejecting the use of any toxin, of which fluoride potentially qualifies.12,14–16 While patients’ rationales for why fluoride is systemically harmful are vast, this fluoride hesitancy is leading to refusal of fluoride for themselves and their children.13,14,17 As such, oral health professionals need to be well-versed on effective alternatives to combat demineralization.

Amorphous calcium phosphate (ACP) is a compound that contributes to remineralization of dental enamel. One drawback to ACP is its  complicated delivery system necessitated by its unstable nature, making the reaction rate of calcium and phosphate difficult to control.18 A continued challenge for ACP use has been harnessing the benefit of calcium and phosphate before they are precipitated out.19 In an attempt to maximize the potential benefit of ACP and resolve the issue of complicated delivery, casein phosphopeptide-amorphous calcium phosphate (CPP-ACP) has become popular.

CPP is a milk protein casein derivative that stabilizes calcium phosphate while also making it more available in dental plaque.19,20  ACP is the component that actually remineralizes the enamel; CPP is added to help stabilize the ACP so that more is delivered to the enamel surface, rather than being precipitated out. Normally calcium and phosphate are highly insoluble. However, in the presence of CPP, they will remain soluble and biologically available.19 The benefit of having this bioavailable calcium and phosphate includes buffering intraoral pH, which will reduce demineralization frequency. CPP-ACP is a reasonable alternative to fluoride, demonstrating clinical effectiveness in the reduction of white spot lesions, hypomineralization, mild fluorosis, and sensitivity.18,19 CPP-ACP comes in both a fluoride-free and fluoride-containing option. For patients who are hesitant to use fluoride, CPP-ACP plain is an excellent alternative that has strong evidence-based research supporting its remineralization effectiveness.21 Patients who have a milk protein casein allergy should not use CPP-ACP.

Calcium sodium phosphosilicate (CSP) bioglass demonstrates promise in remineralization via the release of calcium and phosphate ions.18 It has primarily been used as a desensitizing agent, but early studies are demonstrating that it may enhance remineralization through apatite formation.22 More in vivo and clinical studies to support CSP efficacy are needed before it can be recommended as an alternative to fluoride.18 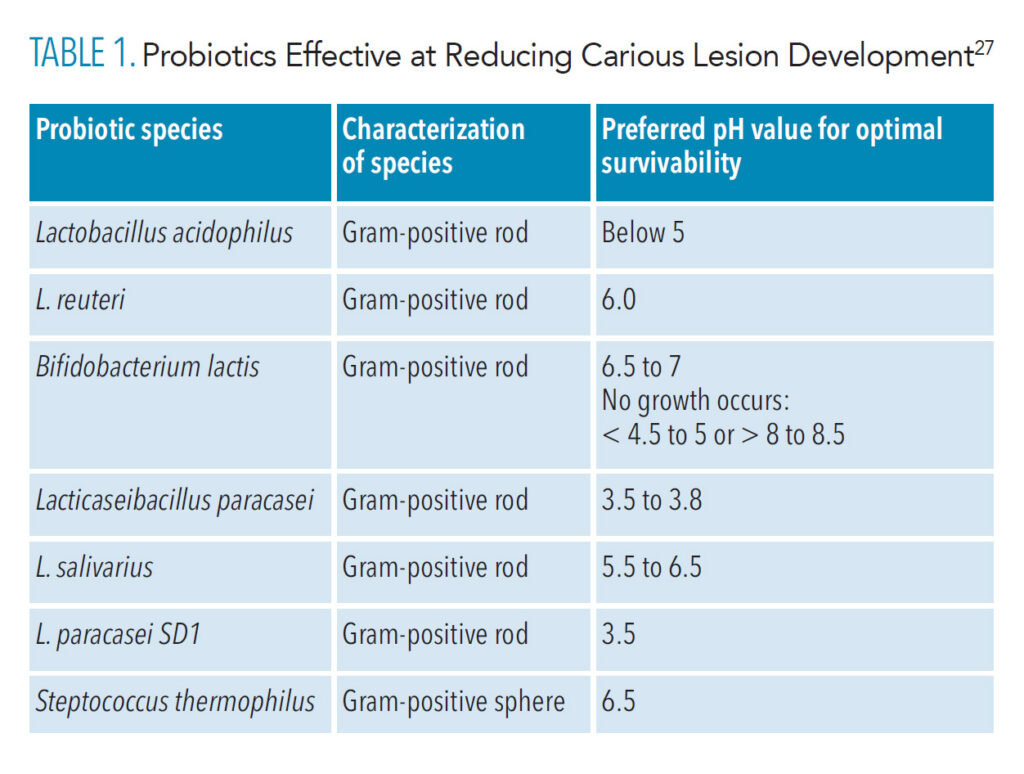 Bee propolis, commonly referred to as “bee glue,” is a natural compound accumulated from different plants, buds, and exudates.23–25 The primary use of propolis by bees is to repair and reinforce hives in order to prevent invaders from infiltrating or damaging them.23,24 While propolis samples vary slightly in composition, the primary components are resin, wax, essential oils, pollen, and other various organic compounds.24 Bee propolis has been promoted as having a wide range of health benefits for many decades. Randomized controlled trials have demonstrated that propolis may have anticancer, antimicrobial, antifungal, and anti-inflammatory effects, with possible oral health benefits, specifically remineralization of enamel.25

Recent studies have shown that the application of propolis to demineralized enamel increased the microhardness of the enamel’s surface.25,26 Further, propolis application has demonstrated effectiveness at reducing the speed of enamel demineralization.26 It appears that propolis works by making calcium and phosphate more likely to be absorbed back into the tooth structure, enhancing the remineralization process.26 Patients who are allergic to bee venom should avoid the use of propolis, as it is likely to cause an allergic reaction. Propolis has demonstrated promise and continued research will help determine its effectiveness at remineralization.

The use of oral probiotics is an emerging therapy for remineralization. Evidence is starting to demonstrate that the oral microbe is directly related to that of the gut; this further supports the mouth-body connection dental professionals have been promoting for years.27,28 Probiotics’ specific mechanism of action in the remineralization process is not fully understood, which leaves ambiguity regarding their effectiveness.28 Research is limited, and the research that is available is very contradictory. While probiotics do not directly remineralize enamel, some research shows that they can assist in the process by significantly influencing oral pH, thereby increasing the likelihood that remineralization will take place by using available minerals within the saliva (Table 1).27,29

Evidence is starting to demonstrate that the oral microbe is directly related to that of the gut.

Numerous studies have demonstrated that oral probiotic administration, using various vehicles, resulted in a statistically significant reduction in cariogenic bacteria.28–30 A 2014 study showed a reduction in caries when pregnant women were given an oral administration of Lactobacillus reuteri during the last month of their pregnancy, as well as to the infants during the first year of life.30

However, a cause for concern is that with regular or excessive use, these bacteria could theoretically form their own biofilm, which could result in an increase in oral acid production, negating any beneficial effects.28 In response to these concerns, researchers are working on developing a genetically modified bacterium that could change the dimension of how oral probiotics operate in the oral cavity.31

Another restriction to oral probiotic use is that researchers have been ineffective at permanently altering the oral microbiome; daily consumption of probiotics would be necessary in order to illicit a profound change in the oral bacteria.28 Requirement of such regular application would result in patient compliance issues, unless they were implemented into an application vehicle such as dentifrice. Due to the lack of sufficient evidence from randomized controlled trials, a clinical recommendation cannot be clearly established for the use of probiotics for remineralization purposes.

Fluoride use has been heavily researched for decades, so it is challenging to develop a comparable alternative that comes with the same level of evidence-based research supporting it. With a growing population of patients who are hesitant to use fluoride, patients need an acceptable alternative to assist in the remineralization process. Regarding nonfluoride therapy, CPP-ACP has strong evidence-based research supporting its efficacy. Research has repeatedly shown clear improvements in remineralization and reduction in white spot lesions, along with other oral health benefits.21

When considering natural alternatives, bee propolis shows promise. However, not enough clinical studies are available to support using it in vivo. Similarly, oral probiotics have emerging research to support their use, but much of the mechanism of action has only been theorized, and repeated exposure appears necessary to ensure a therapeutic effect. Oral health professionals will need to keep up with new research on these alternatives, as well-informed clinicians are best suited to provide individualized education to patients in order to support their oral health. 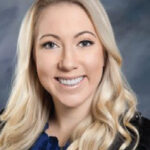 Danielle Ellington, RDH, MA, is an assistant professor in the Department of Dental Hygiene at the Loma Linda University School of Dentistry in Loma Linda, California. She has experience in clinical practice and has served as senior clinic advisor and course director in research, preclinic, dental health education, public health, and personal finance.

The Essential Role of Airflow Filtration, and Ventilation on Air Quality in the Dental Setting

Impact of Cannabis Use on the Provision of Dental Care 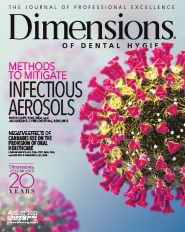