Kombucha: The ‘Champagne of Life?’

I have several friends who swear by kombucha.

I have several friends who swear by kombucha. They claim that drinking it daily gives them more energy and improves their overall well-being. What is this popular health drink and why is it getting so much attention?

Kombucha is green or black tea that has added strains of specific bacteria, sugar, and yeast. The drink ferments for a week or longer, while a mushroom-like cloud forms on the surface. Hence, another name for kombucha is “mushroom tea.” The mushroom cloud formation is called a symbiotic colony of bacteria and yeast (SCOBY), or a biofilm by any other name. The SCOBY can be used to ferment new kombucha and can also be ingested. In some circles, a SCOBY is gifted to friends and family as a special token to promote wellness.

ORAL HEALTH PROFESSIONALS SHOULD ALERT PATIENTS TO RINSE WITH FLUORIDE-CONTAINING WATER AFTER CONSUMING KOMBUCHA AND NOT TO SIP IT CONTINUALLY THROUGHOUT THE DAY.

The week-long fermentation process is the perfect environment for bacterial growth, so several species can be found in the drink once it ages. Some of the species are lactobacillus strains that are said to have probiotic qualities.1 Acetic acid produced by the fermentation process gives the drink its vinegary smell, and alcohol and gasses provide carbonation. Kombucha supposedly originated in China around 220 BC and has been consumed by Asians and Russians for thousands of years. Purported health benefits include positive impacts on:2

Until recently, negative side effects of this ancient elixir haven’t received much attention. As the drink becomes more popular in Western cultures, several side effects have been noted, including stomach problems, yeast infections, allergic reactions, nausea, vomiting, and jaundice. Kombucha batches can become contaminated with unhealthy bacteria and fungi, so those with weakened immune systems and those prone to infection should not use it. It does contain alcohol, so individuals with alcoholism should avoid it. There are also oral concerns. Because kombucha has a highly acidic pH (anywhere from 2.5 to 3.5), its acid content is similar to that of sugary soft drinks. Kombucha can also stain teeth, as it’s made from fermented tea. Oral health professionals should alert patients to rinse with fluoride-containing water after consuming kombucha and not to sip it continually throughout the day. Using a straw could help prevent the drink from contacting enamel surfaces. And it’s advisable to not immediately brush after consuming kombucha, as enamel may be compromised by the acids in the drink.

The scientific jury is still out on whether kombucha truly is the “champagne of life” as it has been called. Chances are many of your patients have tried it, and some are likely regular users. Be aware of the precautions related to kombucha so you and your patients can make informed decisions regarding its risks and benefits. 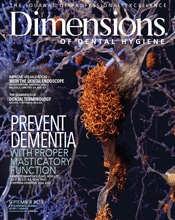