By Donna Catapano-Martinez, DHSc, CDA, RDH, Michelle Boyce, DHSc, RDH and Margaret Garland, MS, DDS On May 10, 2018 1
PURCHASE COURSE
This course was published in the May 2018 issue and expires May 30, 2021. The authors have no commercial conflicts of interest to disclose. This 2 credit hour self-study activity is electronically mediated.

Oral health is paramount for patients’ overall well-being and quality of life. Multiple therapies are available to prevent oral disease, yet caries, periodontal conditions, oral cancer, and oral infectious diseases remain prevalent worldwide.1 For some patients, natural remedies are a main source of health care treatment.1,2 Current evidence supports the role that nutrition plays in combating diseases, specifically through the anti-inflammatory, anticariogenic, and anticarcinogenic actions of specific antioxidants known as polyphenols.3–6 A multitude of in vitro and in vivo studies have been conducted to ascertain how polyphenols aid in reducing oral disease.

Polyphenols belong to a class of plant-based chemical compounds known as phytochemicals. The generic term “polyphenol” encompasses more than 8,000 types of phenolic structures, the most common being phenolic acids, flavonoids, lignans, and stilbenes.7 These phytochemicals possess important therapeutic antioxidant properties that may promote oral health by reducing the risk of inflammation and infections, and lowering the risk of tumor production and oxidative stress (the body’s inability to remove free radicals).7–9 Polyphenols are found in many dietary sources, including a wide array of herbs, spices, fruits, vegetables, whole grains, cereals, nuts, seeds, dry legumes, honey, olive oils, chocolate and soy, as well as plant-based beverages, such as teas, coffee, wine (mainly red), and beer (Table 1, page 52).4,7,9–11

The World Health Organization reports that nearly 100% of adults globally present with caries, as well as 60% to 90% of school-age children.1 Streptococcus mutans plays a major role in the etiology of caries.12 ­Therefore, a reduction in S. mutans levels may help lower the risk for caries. Multiple studies support the use of polyphenols as a possible caries risk reduction intervention.13–16

A 2011 clinical study involving subjects who chewed laboratory-created gum enriched with the polyphenol quercetin (a flavanoid contained in fruits, vegetables, and beverages) found that quercetin was effectively released into saliva within minutes, and by day 7, a marked reduction in overall levels of S. mutans was evident.13 In one clinical study, S. mutans was significantly reduced after subjects rinsed daily for 6 weeks with mouthrinse supplemented with cranberry extract.14

An in vitro study using polyphenols contained in hops demonstrated reduced levels of lactic acid production by S. mutans, while bakuchiol (similar to the polyphenol resveratrol found in red wine) and macelignan polyphenols (found in nutmeg) displayed anti-biofilm activity by inhibiting growth of S. mutans, S. sanguinis, and Actinomyces visco­sus.15 Additional in vitro studies demonstrated that certain polyphenolic components found in cranberries prevented the production of organic acids by cariogenic bacteria, restricted the biofilm formation of S. mutans and S. sobrinus, and inhibited the attachment and coaggregation of numerous additional Streptococcus oral species, including S. mitis, S. criceti, and S. oralis.15 In a laboratory study investigating orange peel extract as a method of caries reduction, researchers noted inhibited mi­cro­bial growth of S. mutans, suggesting the need for additional research to ascertain the effects of these polyphenols when incorporated into mouth­rinses and dentifrices.16

According to the United States Centers for Disease Control and Prevention, almost half of Americans age 30 and older have some type of periodontal disease—that’s approximately 65 million people. More than 70% of individuals age 65 and older are affected.17Several key organisms in periodontal destruction are the red complex bacteria; these subgingival colonizers consist of Porphyromonas gingivalis, Treponema denticola, and Tannerella forsythia.18 Numerous studies support polyphenol’s role in the prevention of periodontal disease.18–23

In 2015, Priya et al23 conducted a clinical study using human subjects to compare the efficacy of mouthrinse containing green tea to that of chlorhexidine gluconate (CHX) in managing plaque-induced gingivitis. Over 30 days, one group rinsed with 5% green tea mouth­rinse, and the other rinsed with 0.12% CHX. Both groups demonstrated a reduction in plaque and bleeding scores on day 15 and day 30; however, those who used green tea rinse exhibited a significantly marked reduction in bleeding scores on day 30. The researchers concluded that green tea mouth­rinse was just as effective in inhibiting biofilm aggregation—and was even more effective at reducing gingival bleeding—than CHX. No significant changes in staining were reported in either group.

According to the National Cancer Institute, approximately 346,902 individuals in the United States are living with oral cancer, a condition that accounts for 2.9% of all new cancer cases.24 A variety of polyphenolic oral cancer studies involving dietary agents have been conducted to ascertain their chemopreventive roles.25–30

During an in vitro experiment, Ghashm et al25 demonstrated that polyphenols found in Malaysian honey were successful at treating cell lines with oral squamous cell carcinoma. Varying concentrations (2% to 10%) of Malaysian honey were directly applied to the malignant cells and microscopically examined over a 24-, 48- and 72-hour period. Results showed that programmed cell death was in­duced at all three time intervals; the researchers also noted a marked reduction in the number of cancerous cells.

Other studies concluded that many poly­phenols found in green and black tea aided in reversing, suppressing, and preventing premalignant cells from transitioning into malignant cells.26,27 Letchoumy et al26 studied the effects of black tea in hamsters infected with oral squamous cell carcinoma. They found that after 18 weeks of ingesting prepared straight black tea (equivalent to 30 mg to 40 mg of tea polyphenols per kg body weight in humans), there was a reduction in the incidence of carcinomas and preneoplastic lesions. This was possibly due to interference with cancer signaling pathways.

A human study by Schwartz et al28 reported that heavy smokers who consumed five cups of green tea per day (400 mg to 500 mg green tea extract per cup) for 4 weeks showed a decrease in mucosal DNA damage. In addition, randomized, placebo-controlled trials in humans presenting with precancerous oral lesions demonstrated that green tea extract has a protective role against the progression of premalignant lesions in the oral cavity.29,30

Oral malodor is a common complaint of patients, and is initiated chiefly by volatile sulfur compounds (VSCs) prevalent in the oral cavity. The particular VSCs are methyl mercaptan and hydrogen sulfide, which are produced by certain strains of bacteria, specifically S. moorei.31,32 According to Aylıkcı et al,31 more than 50% of the general population presents with oral malodor. Although it can originate from oral and nonoral sources, approximately 90% of cases are associated directly with the oral cavity. These are predominantly attributed to poor self care, periodontal disease/deep periodontal pockets, biofilm retention on the tongue, food impaction or material alba, unclean dentures, faulty/failing restorations, deep caries lesions, oral cancers, and/or throat infections.31 A study by Morin et al32 demonstrated that green tea extract exhibited antibacterial activity against S. moorei. Additionally, studies that incorporated green tea polyphenols into mouth spray and chewing gum demonstrated irreversible damage to the bacterial membrane and successful removal of the VSCs responsible for oral malodor.32,33

Candidiasis is a fungal infection caused by Candida yeasts, with the most common being Candida albicans. There are more than 20 species that may cause infection in humans.34 Although such yeasts are part of the normal microflora of the skin, mucous membranes and intestinal tract, infection may arise when overgrowth occurs, especially for immunocompromised patients—such as those undergoing chemo­therapy, individuals afflicted with the human immunodeficiency virus, or immuno­suppressed organ transplant patients.34,35

Shahzad et al36 explored the antifungal potential of 14 polyphenols for inhibition and adhesion properties of C. albicans. This study used reference strains and isolates collected from the oral cavity, dentures and the bloodstream. Seven of the examined polyphenols (curcumin, pyrocatechol, pyrogallol, quercetin, gallic acid, caffeic acid, and naringenin) proved effective against growth and exhibited dose-dependability. Curcumin (found mainly in curry powder and turmeric) and pyrogallol (common in cocoa powder, coffee and beer) were the most effective polyphenols in reducing biofilm. The team’s results showed that both curcumin and pyrogallol significantly suppressed genes that coded for adhesion molecules in biofilm development by 50% to 70%.

Evenson and Braun37 determined that green tea extract caused metabolic instability in the cell walls of C. albicans, and also retarded and inhibited its growth. Results were dose-dependent and, as green tea extract concentrations increased (a maximum of 5 mg/ml experimental concentration), fungal growth rate patterns steadily declined by as much as 43% within 24 hours. Furthermore, it disrupted established biofilm communities. 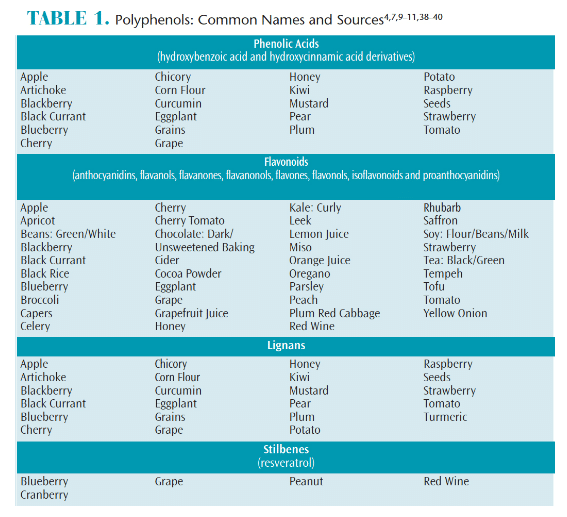 Although numerous in vitro and in vivo research studies demonstrate that various polyphenols have beneficial therapeutic effects on oral health, many investigations are still in preliminary phases. Although polyphenols are found in a multitude of dietary sources, it is recommended that all foods be eaten in moderation, and no single food be eaten in high quantities. Until further studies are conducted, no more than two cups of caffeinated green tea should be consumed per day.3 Pregnant or nursing women, and individuals with systemic conditions, should consult with their physician prior to incorporating any supplements into their diet.3

In order to truly comprehend the role of polyphenols and oral health, additional human studies are needed. Moreover, the inclusion of these compounds in toothpaste, mouthrinses, mouth sprays, chewing gums—and possibly oral and systemic medications—may prove help­ful for managing an array of oral conditions in the future.

Donna Catapano-Martinez, DHSc, CDA, RDH, is a clinical assistant professor in the Department of Dental Hygiene and Dental Assisting at New York University College of Dentistry in New York. She is also an online adjunct professor in the School of Health Sciences at Georgia Highlands College in Rome. Catapano-Martinez has more than 20 years of experience in academia and has been treating patients in private practice since 1999.

Michelle Boyce, DHSc, RDH, is the dean of the School of Health Sciences and associate professor of dental hygiene at Georgia Highlands College. She has been working in academia for 11 years and has practiced as a dental hygienist in general and periodontal practices since 1999.

The Relationship Between Obesity and Periodontal Diseases 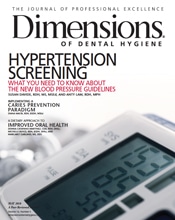