Dentinal hypersensitivity (DH) is a common problem, and its diagnosis is not always straightforward.

Dentinal hypersensitivity (DH) is a common problem, and its diagnosis is not always straightforward. A host of etiologies may need to be evaluated and eliminated to arrive at what may be a “diagnosis by exclusion.” As such, patients should be informed that a diagnosis of DH is not ironclad and that DH may recur. Fortunately, many DH treatments are straightforward, inexpensive, and noninvasive. Follow-up diagnoses and treatments are based on responses to initial treatments. Sometimes the placebo effect is useful, but clinicians need to be wary of promising more than can be delivered.

Despite the remarkable advances in treatments, the detection of exposed and vital root dentin should trigger a “need for ongoing care” mindset. This is because no matter how successful therapies may seem, the conditions that cause DH can recur or develop anew in other sites. Preventing exposure of additional dentin should be part of a comprehensive treatment plan. In some situations, a solution to both DH and the risk of continued exposure of dentin may be treated by therapies that can address both. For example, the following case report illustrates how a procedure designed to cover tubular lumina can obviate the likelihood of additional root exposure, improve esthetics, mitigate DH, and improve the patient’s abilities to perform better self-care.

Figure 1 through Figure 3 depict gingival grafting performed on a 30-year-old man. The patient was a former smoker who had recently stopped using snuff because of noticeable gingival changes. The referring dentist was mainly concerned about the lack of attached gingiva on the labial aspects of the mandibular anterior teeth. The patient’s lower anterior teeth had recently been scaled and root planed, likely inducing what the patient described as “severe pain” to cold air and drinks. However, the patient reported that using a potassium nitrate-containing dentifrice was gradually decreasing DH. Examination revealed moderate to severe gingival recession both on the labial and interproximal aspects of teeth #23—#25. Despite the patient’s self-care attempts, areas of clinical inflammation persisted.

A prominent labial frenum was also noted. As seen in Figure 1, at only 4 weeks post-scaling and root planing, the patient was already forming new calculus on several teeth. Connective tissue grafting was recommended to improve the gingival architecture in the area and to cover the exposed root surfaces. Figure 2 shows connective tissue grafts immediately following suturing but prior to the placement of a periodontal pack. A frenectomy was also performed. Figure 3 depicts the treated area 2 years later. Comparing Figure 1 to Figure 3, note the wider band of attached gingiva and substantial root coverage on the labial aspects of #23—#25 post-treatment. Unfortunately, the patient’s self-care remained suboptimal. The patient reported that DH had persisted for several months following the grafting procedure but “had been gone for 2 years or so now,” and he continued to use a desensitizing dentifrice twice daily.
If a similar case was to be treated today, a host of alternate post-surgical interventions might make better sense: for example, a prompt post-surgical professional application of arginine/calcium carbonate desensitizing paste followed by the daily self-care use of an arginine/calcium carbonate/fluoride dentifrice.

Clinicians must remain up to date on the evidence base for the many treatments available for addressing DH in order to provide the best options for their patients. As we learn more about how DH occurs and why it recurs, clinicians will be able to put this information into practice.

Michael P. Rethman, DDS, MS, is a periodontist and biomedical scientist. An adjunct associate professor at the University of Maryland and adjunct assistant professor at The Ohio State University, he is also a member of Dimensions of Dental Hygiene’s Editorial Advisory Board.

Tips on Technique— The Importance of Grasp 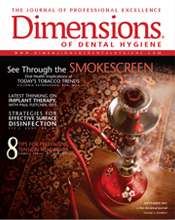