Q How well-received do you think fluoride varnish has become as part of the caries armamentarium?
A Fluoride varnish is becoming more and more accepted. The tide really turned after the release of the American Dental Association’s (ADA) Evidence-based Clinical Recommendations on Professionally Applied Topical Fluoride in 2006.1 This reached dental hygienists and dentists across the country, clearly indicating the efficacy of fluoride varnish as an important treatment protocol. The rate of acceptance for fluoride varnish was significantly increased after these guidelines were disseminated.

Q What do you think hindered acceptance rates initially?
A Typically, there are three types of people: those who will initially accept new ideas, those in the middle who take a while to accept a new idea, and those who are adverse to change and who will never accept a new idea. I suspect some dental professionals didn’t want to change what they had been doing to address caries for years and years.

The research on fluoride varnish was first conducted in Europe years ago.2-5 Unfortunately, in the United States we tend to look at research that is not completed stateside as less meaningful. However, once the Weintraub study6 was published and the ADA Guidelines were released, the inertia that slowed the adoption of fluoride varnish as an integral part of caries prevention seemed to be overcome. Availability was also a problem when fluoride varnish first came into practice.

Now, at least in the dental clinics that I’m involved in, it seems dental professionals don’t want to use anything but varnish in fluoride application. It took time for many to switch from gels to varnish and now they note how much easier varnish is to use, and they wonder why they were slow to leave the gels behind.

THE BENEFITS OF FLUORIDE VARNISH APPLICATION

Q. What are the benefits of fluoride varnish in comparison to traditional methods of application?

A. Basically, the efficacy from a scientific point of view is comparable to the gel application. The old studies done on fluoride used very high concentration gels, which were found to be very effective, and then the varnish studies in Europe showed equal efficacy.2-5 The main advantage is ease of application

Q. Do you think patients are accepting of varnish as a treatment modality?

A. Patients seem to accept it very readily. The introduction of fluoride varnish that goes on white and does not cause discoloration helped in the pediatric population, particularly in teens who are highly concerned about their appearance.

Q. Is there a particular patient population that is best served by fluoride varnish?

A. The people who are best served by the use of fluoride varnish are those at high risk of new caries, regardless of age.

Q. Is fluoride varnish safe to use on children under 5 years of age?

A. The 2006 Weintraub study7 was the first study done on children under 5 years of age and it showed that fluoride varnish application was very effective and well accepted in very young children. Remember that varnish is only applied once or twice a year. Actually, applying fluoride daily on toddlers is not a problem as long as it is a very small amount. When fluoride varnish treatments are done two or three times a year, toxicity is not an issue.

Q. Fluoride varnish is currently only approved by the Food and Drug Administration (FDA) as a hypersensitivity agent. Its use as a caries prevention agent is still considered “off-label,” do you think this will change?

A. I hope so but that is up to the companies and the FDA. The manufacturers have to apply for this use to be approved by the FDA and this is a substantial financial investment because controlled clinical trials must be conducted.

Q. Are there any advances on the horizon for fluoride varnish?

A. In the future, we will definitely see some additional advances. Certainly the introduction of “white” varnish is an advancement—maybe not technologically—but it is crucial to patient acceptance.

Q. Are there any contraindications to the use of fluoride varnish?

A. The usual fluoride toxicity issues apply where it needs to be used according to the directions and by a dental professional. Besides these, there are none.

Q. Has fluoride varnish been effective in a widespread reduction of caries?

A. It’s important to remember that fluoride varnish is not a magic bullet. It’s one part of our armamentarium against dental caries. It won’t stop caries if there is a high bacterial challenge. Fluoride varnish is part of the whole prevention and intervention process to get the disease of caries under control.

The cariogenic or acid-producing bacteria, which once they get to a certain level in the mouth, are very hard to overcome. Very high risk individuals need to use antibacterials as well as fluoride. The concept that I’ve been proposing for the past 10 years is the caries balance where the bacterial challenge must be reduced and the protective factors, including saliva and fluoride, must increase to get the disease in balance.

The caries balance is a very simple concept that is used in the management of other diseases too. Caries is more complicated because of the numerous bacterial species involved but if the pathological factors—caries-causing bacteria, the frequency of exposure to fermentable carbohydrates, and the lack of saliva—can be reduced while the protective factors—presence of saliva, fluoride, and antibacterial action (natural or applied)—can be increased, the approach will be successful.

Q. Has the incidence of caries been reduced or is it increasing?

A. The prevalence of caries 40 years ago was much higher than it is now. One of the first big steps toward caries reduction was putting fluoride in the drinking water and then adding fluoride to dentifrice. However, the rate of caries in the lower socioeconomic and immigrant populations is growing as they aren’t able to take advantage of the preventive measures available and they are also the most susceptible to caries. We’re not delivering preventive care to a large portion of the lower socioeconomic population, which is a growing population.

A. Part of the problem is that people who don’t have very much money and are without a basic level of health literacy are not aware of what can be done or, if they are aware of the options, their priority is to put food on the table. Overall, the general health care provided to disadvantaged populations is not where we’d like it to be.

Q. Health literacy seems quite important as many may not understand that putting soda in a baby’s bottle has such a negative effect on the child’s oral health or the importance of instilling positive home care techniques in children.

Q. What needs to happen to better address the oral health needs of these populations?

A. In dentistry, we have this idea that access to care means providing restorations to a larger population of people. Access to care really should include prevention and intervention so that we can reduce the number of restorations that are necessary. Money is what’s needed to really make a difference. Universal health care is a wonderful concept but will it include dentistry and prevention? It’s an enormous health policy issue. 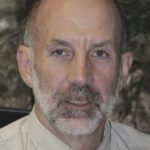 John D.B. Featherstone, MSc, PhD, is professor and dean of the School of Dentistry at the University of California, San Francisco (UCSF). He is also the Leland and Gladys Barber Distinguished Professor of Dentistry at UCSF. Over the past 30 years, Featherstone’s research has focused on cariology, including fluoride mechanisms of action; caries risk assessment; de- and remineralization of the teeth; apatite chemistry; salivary dysfunction; caries prevention; and laser effects on dental hard tissues with emphasis on caries prevention and early caries removal. The European Caries Research Organization presented him with the Zsolnai Prize in 2002 for his contributions to caries research, the World Congress of Microdentistry bestowed him with the Lifetime Achievement Award in 2003, and the Swedish Patent Fund awarded him the Ericsson Prize in Preventive Dentistry in 2003. Featherstone is also a Dimensions editorial advisory board member.

The Power of Whitening 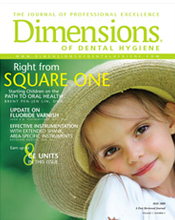