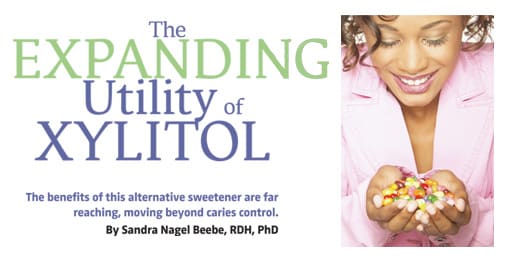 Expanding the Utility of Xylitol

The benefits of this alternative sweetener are far reaching, moving beyond caries control.

Xylitol is a white crystalline substance similar in appearance to sugar with a much sweeter taste but approximately one third fewer calories. It is extracted from xylan with the main sources obtained from beech and birch hardwood barks and corn cobs. It is also found in rice, straw, oat, wheat and cotton seed hulls, various nut shells, fruits (plums, strawberries, raspberries), vegetables (mushrooms, endive, cauliflower), and naturally produced, to some degree, in the human body.

Xylitol quickly dissolves with a refreshing, cooling sensation. As a polyol, it is absorbed slowly and incompletely from the small intestines into the blood. Little or no insulin is metabolized during the absorption process. Any remaining portions of xylitol in the blood are broken down in the large intestines. Chemically, it is a five carbon sugar alcohol (prevents the growth of bacteria or an alkaline enhancement) compared to sugar, which is a six carbon sugar alcohol (promotes bacteria and fungi growth and is acid-forming).1,2

Briefly stated, bacteria (Streptococcus mutans) are located in the biofilm on tooth surfaces to form a sticky environment. S. mutans metabolize the sugars (fermentable carbohydrates) entering the mouth, causing the sugars to metabolize into lactic acids. The acids create a lower pH level, thus demineralizing the tooth surface, which ultimately leads to caries formation. When xylitol is present, S. mutans are attracted to the xylitol over other sugars. The bacteria cannot metabolize xylitol, causing a disruption in their protein synthesis. This results in a decrease in the number of S. mutans and, as a result, the pH level returns to homeostasis.3

Xylitol may contribute to dental decay reduction via: the reduction of S. mutans in plaque and saliva, the interruption of acid production, the reduction of plaque accumulation, and the support of the remineralization process of tooth enamel.4,5 The most effective mode of administration is to chew gum containing xylitol. Recommended dosages range from 6 g to 10 g of xylitol daily, three to five times per day, for 5 minutes each time.5,6

In 1982-1984, the Ylivieska Study enrolled 258 children aged 11-12 who chewed 7 g-10 g of xylitol gum daily, which resulted in a 30% to 60% reduction in new decay.7 Five years later, the authors re-examined the children and participants still experienced a 55% reduction in the rate of caries.8

The Belize Study, 1989-1993, was a comprehensive 40-month study that used 1,277 subjects who were separated into nine groups, with each group chewing one type of gum.9,10 The authors concluded that regular use of polyol-based chewing gum reduced caries rates in young children, with xylitol being the most effective sugar substitute. The Belize Study re-examined the subjects 5 years later and found significant reductions in caries even after the use of xylitol had ended.11 These studies suggest the value of xylitol during tooth eruption.

Xylitol may not only be useful in caries reduction. New benefits are being discovered that may aid patients ranging from children with acute otitis media (AOM) to elderly people with candidiasis.

Finnish researchers studied 306 children in day care nurseries with histories of repeated AOM. Half of the children chewed xylitol-sweetened gum after all meals and snacks (two pieces, five times per day for 2 months) and half of the children chewed regular gum. Incidence of AOM in xylitol chewers (12%) dropped by almost half from regular gum chewers (21%).13 Some AOM may have been prevented through the swallowing that accompanies chewing gum, which automatically helps clear the middle ear canal. Since chewing of xylitol gum indicated a decrease in alpha-hemolytic streptococci for AOM, this same theory could possibly hold true for reducing sinus infections, as similar streptococcal are involved.

Diabetes management has three major goals: to control blood glucose, lipids, and weight. Xylitol is absorbed slowly in the body so the rise in blood glucose and insulin needed to metabolize glucose is greatly reduced. It is possible that oral consumption will not increase blood glucose levels. Xylitol’s caloric value of 2.4 calories per gram versus 4.0 for sugar has the potential to aid in weight control for individuals.6

Tooth decay, debris-covered dentures, or poor oral hygiene may contribute to seniors increased levels of plaque, causing oral infections like candidiasis. A 12-month English study of 111 frail but healthy seniors aged 60 and over were divided into three groups with 1) no gum, 2) chewing xylitol gum, and 3) chewing xylitol gum with an antimicrobial for 15 minutes, two pieces, two times per day.18 Researchers found that the groups chewing xylitol gum lowered their risk for developing candidiasis (fungal or yeast infection) and angular cheilitis.18

Xylitol has no known toxicity, carcinogenicity, or permanent side effects. One adverse effect may be several days of osmotic diarrhea (if more than 100 g per day is consumed by adults or 45 g per day in children) or gastrointestinal symptoms such as gas, bloating, or cramping, an effect similar to eating high-fiber foods. After ingesting polyols, symptoms gradually subside after several days with reduced intake of polyol foods. Polyols may then be gradually added back into the diet.3,5

Some Jewish children have a disorder known as Pentosuria, a congenital enzyme defect and are unable to digest xylitol. Xylitol is absorbed into the body and the urine causing a positive sugar test for diabetes, misdiagnosing a disease when none exists.19

Finally, individuals with temporomandibular joint (TMJ) disorder may need to refrain from chewing the gum. Instead, candy, mints, or other xylitol products should be consumed.5

Xylitol is available in other products such as candy, mints, toothpastes, mouthwashes, mouth sprays, nose sprays, baby mouth wipes, and more. Always read the ingredient label. In order to reap the most benefit, xylitol should be one of the first three ingredients, preferably first when selecting a gum or other products for their dental benefits.

A Modern Approach to Periodontal Debridement 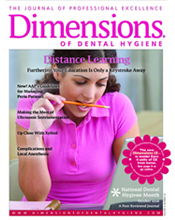