The management of patients with cleft lip and palate.

By Maria Elena Bilello, RDH, MSPH On Sep 17, 2009 0
PURCHASE COURSE
This course was published in the September 2009 issue and expires September 2012. The author has no commercial conflicts of interest to disclose. This 2 credit hour self-study activity is electronically mediated.

On February 22, 2009, millions of people were watching the 81st Annual Academy Awards when the host, Bill Maher, announced that Smile Pinki won the Oscar for Best Documentary Short. A documentary created by Smile Train—a nonprofit organization dedicated to helping children born with facial clefts—Smile Pinki provided an opportunity for the world to see the serious effects of cleft lip and palate and how medical and dental intervention can make a significant improvement in the lives of children born with these deformities.

Each year, thousands of children across the globe are born with cleft lip and palate defects. Cleft disorders are the most common birth defects in the United States. Most children living in the developed world lead normal lives after successful surgeries and coordinated treatment. Unfortunately, those born in developing countries have limited access to treatment and often experience psychological stress due to the resulting disfigurement. See Figure 1 for pre- and post-treatment photos of an infant with cleft lip and palate.

Cleft lip and palate can cause functional deficits including problems with feeding and speech, increased incidence of ear infections, and potential hearing loss. Dental hygienists play an important role in the oral care of patients with cleft lip and palate. They can also provide education about the prevention of these types of birth defects since some risk factors can be modified.

Oral clefts have diverse origins ranging from genetic factors such as gene mutations and protein errors to environmental components that include smoking during pregnancy. Clefting may occur in combination with genetic syndromes such as Treacher-Collins dysostosis and Pierre Robin syndrome. Cleft lip and palate may also be associated with more profound symptoms, including shorter life span and increased risk of cancer.1 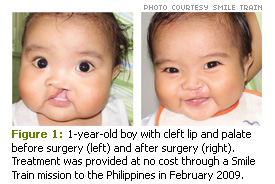 Cleft lip, with or without palatal involvement, is a common congenital abnor mality and is the most visible birth defect. Cleft lip occurs in one out of every 700 births or approximately 5,000 babies born in the United States each year.2 The incidence of clefts in the United States varies among ethnic groups with an increased rate in the Caucasian population (1:500 to 1:1,000 births) compared to the African American population (1:2,000 births).2 Table 1 provides a breakdown of the incidence among a variety of ethnic groups. Clefting also affects boys more frequently than girls.3

A REVIEW OF CLEFT LIP AND PALATE

Cleft defects are multifactorial in their etiology and often associated with a complex sequence of events involving genetic mutations and certain prenatal environmental risk factors.3 Although the specific origin of cleft defects continues to undergo investigation, evidence shows that certain prenatal environmental risk factors, such as the mother’s use of tobacco, alcohol, prescription and non-prescription medications, and illegal drugs as well as an excess or deficiency of certain vitamins, increase the likelihood a fetus will develop a cleft.7

Smoking and folic acid intake during pregnancy are two main factors that modify genetic risks for cleft lip and palate. Cigarette smoking during pregnancy significantly increases the risk of the embryo developing cleft lip and palate defects.2 Shi et al found that if the fetuses of pregnant women who smoked lacked a particular enzyme—GSTT1— they were more prone to developing a cleft defect. Their research determined that GSTT1 helps create reduced glutathione— an anti-oxidant—that protects cells from free radicals, which are initiated by smoking. The data showed that the risk of developing a cleft lip or palate in a fetus lacking the GSTT1 enzyme was significantly increased when the mother smoked 15 or more cigarettes per day.9

Braybrook et al found that mutations in the gene TBX22, which cause cleft palate defects, are inherited through the X chromosome. This gene is important for the proper growth of facial structures.11 In a study done with Icelandic, Brazilian, Canadian, and American Indian populations, a variant of gene PVRL1, which is necessary for cell fusion during development, predisposed the study participants to cleft lip and palate.12

A dental prevention plan that includes regular dental checkups, education about how to provide effective self-care, the application of fluoride, and nutritional counseling to limit refined sugars is important for managing the oral health care of children who have cleft lip and palate. These children are at a significantly higher risk for caries because the incisor teeth often have enamel defects that allow caries to develop more quickly; the teeth around the cleft often erupt in crowded or abnormal positions impeding cleaning; and children who have these defects often consume more soft foods because they have missing teeth.

Chapple and Nunn assessed the prevalence of dental caries, developmental defects of enamel, and related factors among children who have clefts. Not only did the study reveal that oral disease is prevalent among these patients, but also that the risk of caries for these patients increased with age.13

The oral health problems that accompany cleft lip usually involve abnormalities in the maxillary arch, such as supernumerary incisors, rotation and malformation of the lateral incisors, and malocclusion. When the cleft involves both lip and palate the deformities can include rotated hypoplastic or absent lateral incisors; the canines may be positioned in the palate behind the premaxilla; and the molars may be in crossbite.14 A coordinated team that includes dental, orthodontic, and prosthodontic professionals who are familiar with the oral issues created by cleft disorders is necessary to address these problems.

Children born with cleft disorders who receive ongoing care, treatment, and support usually have positive long-term prognoses but other issues may arise. Infants with cleft palate may have difficulty feeding thus requiring special bottles and nipples specifically designed to keep liquids flowing downward into the stomach. Feeding in an upright position can also help keep the liquid flowing downward. An obturator (prosthetic palate) may be used until surgery can be performed to help with feeding problems. Repeated ear infections caused by fluid build-up may occur because the Eustachian tubes are not positioned correctly and the placement of special tubes may be needed.15 Children may also experience speech problems that can be improved with speech therapy.

The psychological effects of clefts on children as well as their families should be considered. In a study done by Turner et al on the psychological status of patients with cleft lip and palate and their parents, 73% of patients felt their self-confidence had been significantly affected by their cleft.16 A mental health professional should be part of the health care team that works with the child and his or her family.

Cleft lip and palate can be treated and repaired. Treatment usually requires a team of professionals working from birth throughout adolescence to address the complicated needs specific to each individual. Advancements in genetic research continue to provide more clues to the causes of cleft deformities. There are many suggestions for the direction of future research—all with the goal of increasing proper fetal development and decreasing the incidence of this manageable yet devastating birth defect. Researchers are currently working on the creation of a clinical test that could be used in utero to discover the development of cleft abnormalities.

Maria Elena Bilello, RDH, MSPH, is an assistant professor at New York City College of Technology (City Tech) in Brooklyn, where she teaches oral histology and embryology. She serves as the senior clinic coordinator and is a faculty fellow on a United States Department of Education Title V grant. Bilello is also co-advisor for City Tech’s Student American Dental Hygienists’ Association. 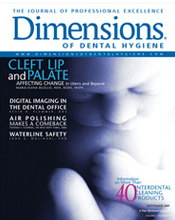