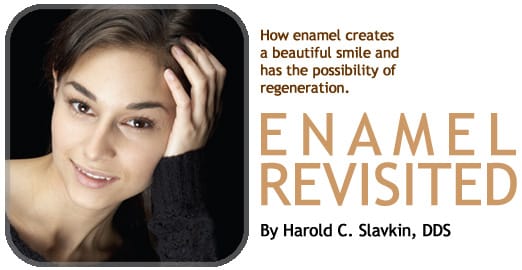 How enamel creates a beautiful smile and has the possibility of regeneration.

in both personal and professional lives. In fact, the reflection of our smile from a mirror often creates a sense of well-being and supports our sense of internal value. But our smile is so much more. Our smile can reflect intent, appreciation, and, most important, smiling reveals one of the most beautiful tissues found in the human body—the magnificent enamel covering the surfaces of our teeth.

Amelogenesis is the process by which ectodermally-derived ameloblast cells synthesize and secrete enamel matrix proteins which, in turn, seed or nucleate and regulate the formation of calcium hydroxyapatite crystals. The final product is enamel—the hardest tissue in the vertebrate body. Giving the gift of a smile is one of the most rewarding parts of the oral health professions.

THE WONDERS OF ENAMEL

The enamel tissue forms in juxtaposition to dentin (without an intervening tissue or boundary). Enamel initially consists of an organic extracellular matrix composed of a number of different types of proteins. Within the protein environment, calcium hydroxyapatite crystals grow along their individual c-axis. These crystals eventually assemble into a remarkable bioceramic that becomes the hardest tissue in the body.

Following enamel formation and biomineralization, the formative amelobast cells are reduced and eventually form a pellicle on the surfaces of erupting teeth. After tooth eruption, there are no more cells available for the replacement or regeneration of enamel. The extraordinary assembly of enamel crystals and calcium hydroxyapatite within the enamel tissue that covers the teeth provides the unique substrate for light, contributing to the dazzling splendor of a full smile.

Amelogenesis describes the entire biological process of producing enamel. In human development, it begins during the seventh month of pregnancy or the beginning of the third trimester on the deciduous mandibular incisors and is completed by 6 months postnatally. The process entails the building of an extracellular matrix composed of various proteins, ie, amelogenins, ameloblastins, metalloproteinases, and other enzymes; glycosaminoglycans; minerals; and water (Figure 1). The major protein is amelogenin and the human gene is located on both the X and Y chromosomes.1,2

The logic of the enamel-forming microenvironment is to seed or nucleate mineral deposition at a specific location and create a nanoenvironment that enables crystal formation and crystal growth essentially in the c-axis (long axis) in order to produce the longest and largest crystals in all of biology—the enamel bioceramic, which grows along the dentin-enamel junction. Amelogenins form nanospheres, and within these environs, crystal growth is initiated.3-6 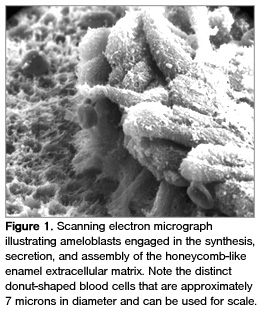 While the multiple protein-protein interactions mediate crystal growth, eg, charge distribution on the amino acids that constitute the protein, pH, etc, proteins are degraded by enzymes (metalloproteinases) to result in the fully mineralized enamel ceramic (Figure 2).

In tandem, dentinogenesis is a complementary process that builds an extracellular matrix, primarily using type I and III collagens along with sialoglycoproteins and phosphoproteins. The dentin proteins are not degraded, and the small crystals that are formed within dentin create yet another type of bioceramic termed dentin. Dentin forms in advance of enamel and then enamel forms along the dentin surface, which is termed the dentin-enamel junction. Importantly, during the earliest stages of both the ectodermally-derived amelogenesis and the mesenchymal-derived dentinogenesis, active cell-cell communications between disparate tissue types is regulated by a number of intriguing molecules termed growth factors.7

Curiously, as the crown of the tooth is being completed, Hertwig’s Epithelial Root Sheath (HERS) forms and advances apically to draft the outline for root formation while differentiating into various cell types associated with the formation of acellular cementum. Many years ago, it was postulated that cementum contained enamel-like proteins, which had antigenic determinants that induce antibodies directed against amelogenin.8 Thereafter, a number of other scientists learned that HERS contain messenger ribonucleic acids (RNAs) that are related to amelogenins and that cementum contains types 1 and III collagens and trace amounts of enamel-related proteins.7,9,10-13 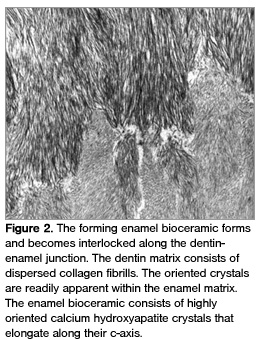 Further analyses also suggest that various growth factors are found within extracellular matrices, which are associated with biomineralization of enamel, dentin, and cementum as well as bone and cartilage.7,14,15

ENAMEL AS A THERAPEUTIC AGENT?

10,11,16 The commercial product changed the spelling to Emdogain®*. It is made from lyophilized bovine enamel extracellular matrix proteins. The claim is that the organic enamel matrix can function as an inducer of periodontal tissue regeneration, ie, cementum, Sharpey’s fibers, and alveolar bone.7,16

From another perspective, numerous scientific groups have postulated that enamel can be repaired or regenerated using recombinant DNA technology. Enamel protein genes have been identified, cloned, and sequenced.1,4 A number of these genes are involved with enamel biomineralization. Techniques are available to place human genes into bioreactors that can yield kilograms of highly specific proteins. These enamel recombinant proteins (amelogenins, ameloblastins, etc) can be used to form an enamel paste that can be applied to enamel defects.17

Scientific discovery produces the fuel that powers the engine of technology and applications to clinical dentistry.18 The completion of the human genome in October 2004 led to our understanding of biological mechanisms required for morphogenesis (how we form tissues, organs, and systems of the body); the RNAs that form the human transcriptomes; the proteins that comprise the human proteome; and the various life-supporting processes that form the human metabolome (the complete complement of all small molecule chemicals found in or produced by an organism). Our future in clinical dentistry is enormously promising and bright.

Harold is a professor and dean emeritus at the Herman Ostrow School of Dentistry, University of Southern California in Los Angeles. As former director of the National Institute of Dental and Craniofacial Research (NIDCR), one of the major accomplishments of his tenure at NIDCR was completion of the first United States Surgeon General's Report, Oral Health in America, to focus exclusively on craniofacial and oral health. Slavkin is a member of the National Academy of Medicine and a fellow in the American Association for the Advancement of Science. A cofounder of the Santa Fe Group, an oral health think tank, he was recognized with the 2016 William J. Gies Award for Vision as a Dental Educator and the 2016 American Association for Dental Research Jack Hein Pubic Service Award for promoting oral health research activities to a wide constituency.

How to Treat Intrinsic Stain 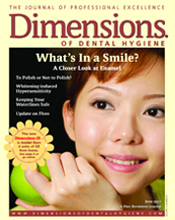