Dentistry Loses Two of Its Best

Two icons in the field of dentistry—Arthur A. Dugoni, DDS, MSD, and Sebastian Sebastian G. Ciancio, DDS—recently passed away.

Two icons in the field of dentistry—Arthur A. Dugoni, DDS, MSD, and Sebastian Sebastian G. Ciancio, DDS—recently passed away. Dugoni, who transformed the University of the Pacific School of Dentistry into one of the nation’s preeminent institutions during his 28 years as dean, died September 23 at his home in Palo Alto, California. He was 95. A legend in the field of dental education, from1978 to 2006 he was dean of what became known as the University of the Pacific Arthur A. Dugoni School of Dentistry. He also served as president of the American Dental Association, American Dental Education Association, American Board of Orthodontics, and the California Dental Association. Among his many accolades, Dugoni was one of only 30 living members of the FDI World Dental Federation’s List of Honour. He also received the William J. Gies Award from the American Dental Education Association for outstanding achievement as a dental educator.

Dimensions of Dental Hygiene Editorial Advisory Board member Sebastian G. Ciancio, DDS, a distinguished service professor in the Department of Periodontics and Endodontics and director of the Center for Dental Studies in the Schools of Medicine and Dentistry, State University of New York at Buffalo (UB), passed away on October 17 at the age of 83. He was also an adjunct professor in the Department of Pharmacology at UB. Widely known for his research in the treatment of periodontal diseases, Ciancio was a recognized scholar in the fields of periodontology and pharmacology. He was a Fellow of the International College of Dentists and past president of the American Academy of Periodontology. A prolific writer, Ciancio authored more than 150 publications in academic journals and over 25 books and book chapters. He also held two patents.

Help For Patients With Dry Mouth 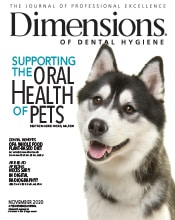