Is it still relevant?

When the body is unable to produce corticosteroids because of either primary or secondary adrenal insufficiency, replacement therapy is indicated. Patients on long-term systemic steroid have long been advised to take supplemental glucocorticoids or “steroid cover” when undergoing certain types of stressful treatment, including dental procedures.1 The basis for this practice is that exogenous steroids suppress the adrenal function to an extent that insufficient levels of cortisol

can be produced in response to stress, posing a risk of acute adrenal crisis with hypotension and collapse.1,2 In the past, the “Rule of Twos” was used as a management tool for dental health care providers as the steroid cover protocol for patients who were receiving replacement glucocorticosteroids. The Rule of Twos states that adrenal suppression may occur if a patient is taking 20 mg of cortisone or its equivalent daily, for 2 weeks within 2 years of dental treatment (see Table 1).4-6 In order to avoid an adrenal crisis, corticosteroid supplementation was advised. The adrenal glands7 are small endocrine glands that are found bilaterally on top of the kidneys (see Figure 1). Each gland contains an adrenal cortex and medulla. The medulla primarily secretes epinephrine, whereas the cortex secretes a variety of hormones with multiple actions.8 The adrenal cortex is divided into three zones. The outer zone produces mineralocorticoids (aldosterone) that regulate physiologic levels of sodium and potassium. The inner zone secretes androgens. The middle zone synthesizes glucocorticoids, which are responsible for carbohydrate metabolism and resistance to stress.9 The major glucocorticoid found in the body is cortisol (hydrocortisone). The normal adult secretes 20 mg of cortisol daily and in times of stress, this amount may significantly increase.10

The adrenal glands produce aldosterone and cortisol hormones that allow the body to adapt to stress and are vital to survival.11 When there is a lack of these hormones, the body is less able to adapt to stressful situations, and this causes symptoms of adrenal insufficiency. Clinical features of adrenal insufficiency include: weakness, fatigue, weight loss, hypotension, hyperpigmentation of the skin and mucous membranes, nausea, vomiting, abdominal pain, salt craving, and myalgia. Individuals who do not produce a sufficient amount of adrenal hormones may suffer from either primary or secondary adrenal insufficiency. Addison’s Disease or primary adrenal insufficiency is caused by the gradual destruction of the adrenal cortex and affects 1 in 1,000,000 people.12 These patients need lifelong exogenous replacement therapy. Cortisol levels with this disease do not increase in response to stress. Secondary adrenal insufficiency is more 12 and may occur in a variety of ways. The first is failure to produce adrenocorticotropic hormone from tumors or infections. Another form of secondary adrenal insufficiency occurs after the surgical removal of the hyperfunctioning gland as seen in Cushing’s Syndrome.13 These patients also need lifelong replacement therapy. A third form of adrenal insufficiency occurs when individuals are administered corticosteroids for a variety of medical uses (Table 2) because of their anti-inflammatory and immunosuppressive properties.2 As therapy continues, the ability of the adrenal glands to produce enough endogenous corticosteroid decreases and a variable degree of disuse atrophy develops. Daily doses of hydrocortisone greater than 20 mg for longer than 2 weeks are likely to suppress the synthesis of cortisol and result in disuse atrophy of the cortisol-secreting cells.6

Recommendations for supplemental corticosteroid for preventing adrenal crisis in dentistry were based primarily on medical reports; only a few analyzed the risks associated with dental procedures. Miller et al2 and Gibson and Ferguson1 searched the literature addressing adrenal crisis in dentistry. Miller et al2 found only four cases published in peer reviewed journals between 1966 and 2000 that reported adrenal crisis related to dental treatment. Their analysis found that: 1. The limited number of cases (four in 35 years) indicated that adrenal crisis is seldom encountered in dentistry. 2. The reports of these four cases were poorly documented, other disorders were not ruled out, and there was lack of evidence that the patients would have responded to other interventions. 3. There were overlapping features to these four cases: use of a general anesthetic, extraction of multiple teeth, low blood pressure at the end of the appointment, adrenal crisis developing 1.5 hours to 5 hours after surgery, and an uncertainty about whether post-operative analgesia was obtained. 4. No controlled, randomized clinical trials have been conducted in patients who have adrenal insufficiency to definitely establish that corticosteroids are required for dental procedures. 5. From these reports, four factors appear to contribute to the risk of adrenal crisis during the perioperative period of oral surgery including the magnitude of the surgery, use of general anesthetic, overall health of the patient, and degree of pain control. 6. Based on the data, these researchers identified risk conditions for adrenal crisis and suggest new guidelines for supplementation (Table 3).

Several researchers1,2,14 have concluded that adrenal crisis is a rare event in dentistry, especially for patients with secondary adrenal insufficiency who develop this condition from taking steroids for common medical conditions. Most routine dental procedures, including nonsurgical periodontal therapy, can be performed without glucocoticoid supplementation or steroid cover. Patients with Addison’s Disease are more at risk for developing acute adrenal insufficiency than patients with secondary adrenal insufficiency.14 For this latter group of patients, performance of routine dentistry including minor surgical procedures under local anesthetic does not require supplemental steroids.14 Therefore, the Rule of Twos no longer applies for these individuals. However, the patient’s physician should always be consulted if in doubt. 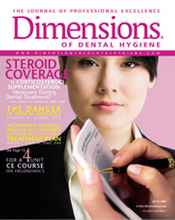