The risks and implications for dental hygienists.

Dental hygienists practice in a highly contaminated environment—the human mouth. The mouth contains bacteria and viruses from many sources. The saliva of a healthy patient contains large numbers of streptococci, staphylococci, and gram negative bacteria. While many of these organisms are relatively innocuous for a healthy person, they carry the possibility of infection for the increasing number of people with compromised immune systems.

Of more concern to hygienists are the pathogenic bacteria and viruses originating from nonsalivary and nontooth origins. These include organisms from the nasopharynx, sputum originating in the lungs, and blood routinely encountered during root planing. These areas are the sources of many pathogenic organisms such as tuberculosis (TB), hepatitis, human immunodeficiency virus (HIV), and severe acute respiratory syndrome (SARS).

The Nature of Dental Aerosols

Most procedures performed by dental hygienists have the potential for creating contaminated aerosols and splatter. The use of hand scalers, prophy angles, and air-water syringes produce some splatter in the form of relatively large droplets. While large droplets contain potentially pathogenic organisms, they are usually controlled by standard barrier techniques such as gloves, masks, and eye protection. However, the ultrasonic scaler and the air polisher are the greatest producers of small particle aerosol contamination in dentistry.1-6 Several studies1-6 show that the ultrasonic scaler produces more airborne contamination than any other instrument in dentistry. The air polisher creates an almost equal amount of airborne contamination. The use of these instruments places hygienists at the forefront of risk for the airborne transmission of infections.

Many hygienists assume that the visible aerosols produced by an ultrasonic scaler or an air polisher are the only aerosols produced by these instruments. These highly visible aerosols are made up of coolant water and, in the case of an air polisher, some form of abrasive. If the instrument and the dental unit water lines are maintained as recommended by the American Dental Association (ADA),7 the coolant water aerosol represents little danger to the operator. The risk of infection occurs when these instruments are used on a patient and the visible aerosol mixes with the invisible microorganisms that arise from the patient.

An in vitro study evaluated this risk potential by measuring the aerosol that came from the operating site.8 In this study, an ultrasonic scaler was used for 3 seconds without coolant water so there was no coolant water aerosol. The tip of the ultrasonic scaler was placed in a small amount of fluorescent fluid equivalent to one drop of saliva or blood. The aerosol produced was evaluated by analyzing the amount of fluorescent contamination present after 3 seconds of use. Hundreds of fluorescent droplets spread over greater than 18 inches were detected. The aerosol produced in this study was virtually invisible to the naked eye. However, this invisible aerosol is the source of infection risk for dental hygienists, not the highly visible aerosols from coolant water.

While studies have evaluated the number of organisms propelled into the air by various dental instruments, most of these studies counted organisms that grew on a petri dish exposed to the air of the operatory. Unfortunately, due to the nature of the culture medium used, these studies only counted the relatively innocuous aerobic bacteria in the aerosol. They did not count the number of anaerobic bacteria, such as those found in periodontal pockets; the number of difficult to culture bacteria, such as TB; or the number of viruses. These organisms are much more likely to be pathogenic and represent the real danger.

Scientific literature detailing the spread of infection by an aerosol route is available. Recent examples include the spread of TB on an airplane and the spread of measles through the ventilation system of a pediatric office.9-10 Traditionally, the greatest danger inherent in dental aerosols was TB. In the past, TB was considered an occupational hazard for dentistry. Currently in the United States, TB is rare. However, in certain populations such as recent immigrants, prisons, and the homeless there is a much higher prevalence of TB. Hygienists working with patients from these groups need to approach treatment with great care due to the potential for undiagnosed TB. In private clinical practice, the greatest danger comes from viruses harbored in the nasopharynx and blood particles arising from the operative site.

Many viruses are present in the mouth originating from the saliva, gingival tissues, and from the nose, throat, and lungs. These include the common cold, influenza, and herpetic viruses. The greatest current concern is the SARS virus. The only report of a dental professional who contracted SARS was an Associated Press report of a Taiwanese dentist who died from the disease.11 SARS is apparently caused by a coronavirus similar to the viruses that cause the common cold. Hygienists have a 60% higher incidence of cold symptoms than a similar professional group without dental patient contact.12 It appears that a risk of coronavirus transmission between patient and practitioner may exist. The Centers for Disease Control and Prevention (CDC) and the ADA have recommended that all procedures generating aerosols be avoided in the presence of SARS because it can be spread by contaminated aerosols.13-14 Because a patient with active SARS is extremely ill, it is unlikely that any dental procedures would be performed. However, the incubation time for SARS is 2 to 10 days and possibly longer. There is a potential for SARS to be transmitted during this incubation stage or possibly during a carrier state that may exist for an extended period of time after recovery. Due to this potential risk, as with HIV, hygienists should follow universal precautions for aerosols on the assumption that all patients carry an infectious disease that can be spread by an aerosol route.

Several studies have shown that blood is universally found in the aerosols produced by an ultrasonic scaler during root planing.15,16 These studies further demonstrate that even when the operator cannot see blood contamination there is an adequate amount of blood in the aerosols from root planing to be detected by an occult blood test. This is true no matter what type of ultrasonic scaler or scaler tip is used. The use of ultrasonic and sonic vibration in the presence of a liquid, ie, blood, aerosolizes the liquid. Whatever bloodborne infection the patient may carry is probably present in the dental aerosols from root planing with an ultrasonic scaler.

Gloves, well-fitting masks, and eye protection should always be used and greatly lowers the risk of infection. However, a true aerosol stays airborne for up to 30 minutes and larger droplets evaporate and the contamination they carry can become re-airborne as a dust particle, ie, a droplet nuclei. Therefore, the risk of contamination continues long after the procedure is over. Because of this extended risk time as well as the often poor fit of masks and eye protection, other precautions should be followed. Using a preprocedural rinse such as chlorhexidine lowers the number of aerobic bacteria in the air. However, it will not affect blood coming from the operative site or viruses, such as SARS, coming from the respiratory tract. Using a preprocedural rinse should not be relied on to prevent airborne contamination.

The use of a high volume evacuator (HVE) has been shown to universally reduce airborne contamination, no matter what the dental source by 90% to 98%.17-19 However, a saliva ejector does not qualify as a high volume evacuator. The small diameter of a saliva ejector keeps it from removing enough air to be effective in reducing aerosols. A large diameter HVE may be held separately by an assistant or the hygienist, attached to the ultrasonic scaler, or possibly attached to one of the “dry field” devices. Using an HVE is a mandatory infection control precaution during the use of an ultrasonic scaler.

Dental aerosols represent an infection hazard for dental hygienists due to their gross contamination with microorganisms and blood. The advent of SARS and its predicted reemergence during the upcoming flu season have brought the dangers of dental aerosols to a higher level. Aerosols are easily controlled with the appropriate precautions. Whenever an ultrasonic scaler or air polisher is used the following steps should be followed: (1) barrier protection (2) high volume evacuation, and (3) preprocedural rinsing. Each of these adds a layer of protection for the operator and others in the dental office. All three steps must be followed for adequate protection. The use of only one or two of the steps will not yield the necessary level of protection adequate for safety.

The Evolution of Caries Detection 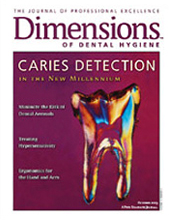