The use of this technique is key to positive therapeutic outcomes in scaling and root planing.

“Channeling” is the use of a deliberateand purposeful working stroke. Regardless of whether the calculus is light, moderate, or heavy, loosely attached or tenacious, or supra-or subgingival, channel working strokes are applicable. These strokes refer to the vertical or oblique activation of the instrument in “channels,” while placing lateral pressure on the lower one-third of the cutting blade (Figure 1).1,2 In order to effectively use channeling strokes, clinicians must mentally picture the environment, which requires intense concentration. The term channeling was created when scaling and root planing was the only moniker used to describe instrumentation.

Today, periodontal debridement, root preparation, and mechanical anti-infective therapy are all used to describe scaling and root planing, however, the channeling concept remains pertinent. While channeling is only one component of the entire instrumentation process, it is vitally important to successful therapeutic outcomes. Channeling subgingival deposits requires a specific technique compared to removing supragingival calculus. By meticulously preparing the subgingival root surface, healing of the overlying soft tissue is maximized.

WHAT IS A CHANNEL STROKE?

Channel scaling is the manual removal of deposits through the use of overlapping strokes on the root surface until complete coverage has been provided. An important part of the activation phase, channel strokes to remove calculus should be powerful, controlled, overlapping, organized, and sequential. They are completed with the terminal 1 mm to 2 mm of the instrument blade in a pattern, path, or channel of least resistance to remove the deposit. 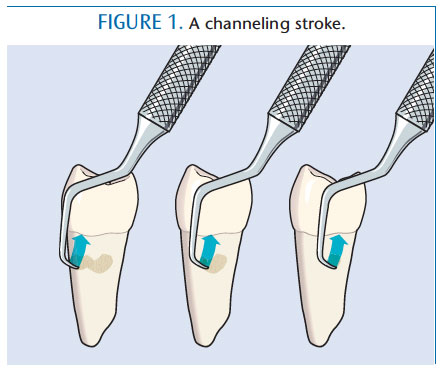 The right conditions must be present in order for channeling to be effective. The fundamental principles of instrumentation need to be appropriately applied such as lighting, mirror use, positioning, grasp, and fulcrum placement. Precursors to an effective channel stroke also include selection of the appropriate blade size and shape, as well as the best shank strength for the calculus’ configuration and attachment mode. Next, correct adaptation leads to effective channeling.

Insertion, use of the blade’s terminal one-third, and working angulation are evaluated. Stroke direction and length are considered before the activation phase is initiated. Seasoned clinicians might not identify all of these aspects each day in clinical practice, however, this movement through the phases of instrumentation is critical to scaling and root planing. For example, an inappropriate fulcrum placement that does not allow access, adaptation, or the power needed to channel will result in less than ideal instrumentation. Likewise, a grasp that is incorrect will compromise the power of the channel stroke. Correct grasp not only adds to effective stroke activations, it protects the musculoskeletal system by using precisely positioned fingers.3 Grasp points that are not in alignment can contribute to occupational injuries.3

Blade size and shape and shank strength should be selected based on present conditions. Hopefully, an array of instruments is available including sickles, universal curets, and area-specific and combination designs. Shank strength for channeling is flexible, moderate, firm, or extra firm, depending on calculus density and mode of attachment.

Use of the lower aspect of the curet blade (last 1 mm to 2 mm) instead of the middle of the blade or the entire length of the blade is crucial. By adapting a smaller portion of the blade, the power of the stroke is concentrated against a small area of resistance. Stroke direction with channeling is usually vertical or oblique because of the ability to aim the stroke at right angles to the edge of the deposit that forms in horizontal ledges or rings. The power of the channel stroke is directed at the narrowest and, thus, least resistant portion of the deposit.1 Conversely, horizontal strokes are directed to ward the longest and most resistant dimension of the deposit, making this direction only suitable in specific situations. 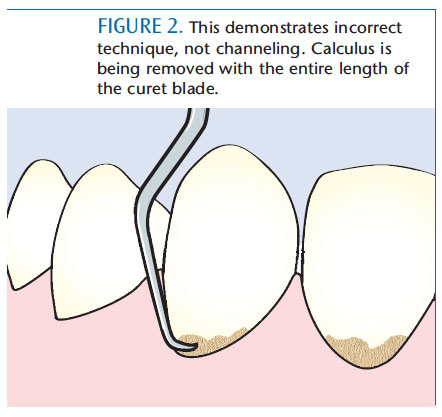 Short stroke length instills power and control that enhance effectiveness. Long strokes result in lack of power and control. Long strokes also need to be replaced at the apical border of the deposit for the next stroke, creating unwarranted motion and time. Wrist forearm movement is the fundamental way to activate a working stroke vs pulling with the fingers (ie, digital or finger activation). The latter causes fatigue and can lead to musculoskeletal problems. While channeling, pressure on the deposit must be modulated appropriately. Modulating pressure refers to using the exact amount of pressure for the deposit’s size and attachment mode. Too much pressure after partial removal of the deposit can result in unnecessary root substance removal and gouging. This roughness could accelerate future development of plaque biofilm and thus calculus. Conversely, too little pressure causes smoothing or burnishing of deposits, resultingin i ncomplete removal. Also during each short channel stroke, pressure is modulated starting with firm, moderate pressure and ending with light pressure as the stroke comes to a halt. Modulating just the right amount of pressure is a “sixth sense” that dental hygienists develop as competency and expertise are acquired.

Trying to remove bulky calculus deposits in one stroke (Figure 2) as opposed to removal with channel strokes is not an effective strategy. First, it requires heavy lateral pressure, which can cause hand and finger fatigue, leading to repetitive strain injuries or cumulative trauma disorders. Removing deposits this way requires a random and haphazard stroke, which could potentially leave calculus fragments, plaque biofilm, and endotoxin on the root surface. These remnants interfere with optimal healing that is possible only if all detectable deposits are removed. Third, heavy-handedness used to “pop off” calculus can be uncomfortable or painful during therapy, or postoperatively in patients who are anesthetized. Next, a long stroke that exits the sulcus or pocket requires additional time and effort to replace at the border of the deposit and can also cause tissue trauma. The principle of “time and motion economy” is violated. Lastly, and probably the most common error, is that not channeling can result in removing calculus from the outside layers to the inside (ie, shaving), which results in burnishing and incomplete healing.4 Perio scopy reveals that the sites that bleed most often are most likely to have residual deposits present.5–7 Without channeling, calculus removal is very challenging, and can result in increased stress and loss of efficiency and effectiveness.

Channeling requires great tactile sense, excellent mental imagery, and knowledge of tooth anatomy. Clinicians detect a subgingival deposit and assess its shape while mentally picturing it in relation to the root anatomy. The curet is engaged at the most distal and apical point of the deposit at a 70° to 80° blade to-root angle, and oblique or vertical strokes are applied in small increments. While at the distal/apical border, lateral pressure is applied to the curet to engage its terminal working end underneath the calculus next to the root surface. Moderate pressure is applied for the 1 mm to 2 mm short strokes in the appropriate direction: oblique for buccal and lingual or vertical for proximals. The pressure is then released at the top of this increment, and reapplied to attack the next 1 mm to 2 mm increment.

Without withdrawing the blade from the sulcus or pocket, the last 1 mm to 2 mm of the blade is engaged in the next segment. Each segment of deposit removal is overlapping to prevent residual remnants. The series of strokes in a channel occur one after another resulting in a fluid working stroke to remove calculus piece by piece. 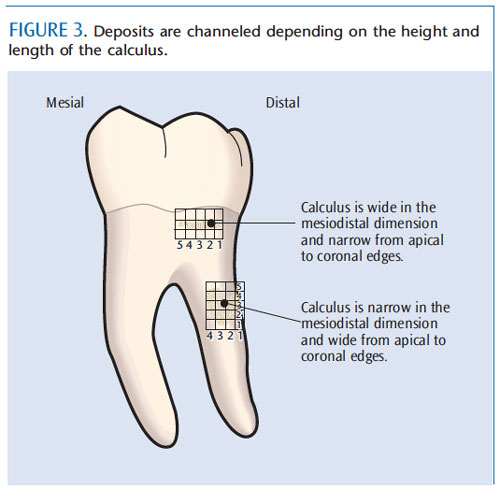 This approach to channeling deposits depends on the height (apical to coronal) and length (side to side) of the calculus (Figure 3). For example, if the calculus is 5 mm in height, at least five pressure and release channel strokes would be applied in each channel in an apical to coronal direction. Then, using the lightest pressure, detection with the curet would occur to assess if the deposit is remaining in that zone. If so, the curet is placed below the remaining deposit and the series of strokes is repeated. This approach is applied across the deposit’s length (ie, horizontal fashion) until removal is evident. If the deposit is 5 mm long, then approximately five channels are used. Therefore, channeling has occurred from the bottom to the top of the deposit and from side to side. The clinician then proceeds to debride (root plane) with longer, successively lighter activation, depending on need.

The complete process is much like placing a grid or graph paper with small increments over the calculus and using this visual image to remove the entire piece, segment by segment, in a formalized and thoughtful process as depicted in Figure 3. Movement to remove the deposit occurs from channel one to channel two, and progresses to the last channel.

Channeling usually applies to vertical and/or oblique stroke directions, however, it can be applied to horizontal stroke activation, particularly if the deposit is narrow and long (Figure 3). In this case, the clinician works from the most distal and apical portion and directs strokes horizontally in short increments. The use of horizontal strokes assumes that the height of the deposit fits within the 1 mm to 2 mm of the blade that is adapted to the root surface. Horizontal strokes are usually reserved for specific locations such as line angles, facials or linguals of anterior teeth, narrow pockets, or a thin long piece of deposit on the buccal or lingual surface.

When used in educating students or practitioners, the term “channeling” seems to send a clear message about what the process of removing calculus increment by increment looks like. In teaching, the terms “bite and release,” although not professional terminology, help students visualize and time the channeling process. The “bite” is when the blade is engaged at the beginning of the short stroke and the “release” is the relaxing of lateral pressure at the end of the stroke.

Channeling achieves thorough deposit removal in an organized and purposeful fashion. Removal of deposits in short, incremental, overlapping pathways is more effective and efficient than using long strokes or a one-stroke removal technique. Successful deposit removal depends on skilled channeling. Although there is no research available on channeling, experienced clinicians know this technique is efficacious in mechanical nonsurgical periodontal therapy and oral prophylaxis. Perhaps with the use of the dental endoscope, more research will be conducted in the future on ideal deposit removal techniques.

What the Future Holds 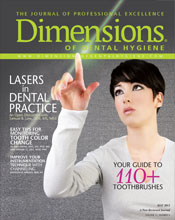