The use of extraoral fulcrums can mean the difference between success and failure in periodontal therapy.

Many of the traditional “rules” of hand instrumentation, such as the insistence on only using intraoral toothborne finger rests, are legacies from the era when most scaling—particularly by dental hygienists—was done supragingivally. In the early part of the 20th century, a large percentage of the American population was composed of children and young adults. These age groups suffered more from caries than periodontal diseases. Older patients with periodontitis and pockets with subgingival deposits were not as prevalent in dental operatories as they are today.

In the 1920s, the first dental hygienists were taught to perform a “prophylaxis” as a preventive procedure to remove supragingival deposits in a relatively healthy mouth of a child or young adult. Periodontitis patients were treated by a small number of dentists or pioneer periodontists who would scale subgingivally or perform periodontal surgery. As there were not enough periodontists or skilled dentists to treat all of these patients, many received only supragingival scaling. For decades, the periodontal needs of patients were not adequately met and many teeth were needlessly extracted.

Today, the United States has more older adults than ever before, and this affects both dentistry and dental hygiene. Because we have succeeded in decreasing the caries rate, more of these patients have their full dentition but now suffer from periodontitis. Unfortunately, many clinicians and dental hygiene educators still use and teach techniques that were originally intended for supragingival calculus removal. Periodontists alone cannot treat the millions of patients with periodontitis; general dentists and dental hygienists must become better educated to perform advanced periodontal instrumentation. Clinical education should incorporate innovative extraoral and alternative fulcrums with newer hand instruments, such as mini-bladed curets, to adequately prepare graduates for these challenges.

Meeting the Needs of Patients

Strict adherence to intraoral fulcrums for the maxillary posterior teeth is especially problematic. The practice of using an intraoral fulcrum on the premolars and reaching back to the molars with a Gracey 11/12 or 13/14 is a perfect example (Figure 2). This ineffective split fulcrum technique is still taught and being used by thousands of dental hygienists. Separating the grasping fingers from the fulcrum finger and dropping the handle into the web of the hand commits the clinician to finger flexing and results in a short, weak, shallow, picking stroke that will not extend deeply enough. If it is able to reach the calculus in a deep pocket, the stroke will usually fail to remove the calculus completely and will “shave” over the deposit instead of breaking it away from the root surface. If the fingers are kept together and wrist motion is used with a palm-up fulcrum, the stroke is stronger but still too short for deep pockets (Figure 3). The use of extraoral, opposite arch, and reinforced fulcrums allows a longer, more powerful, even stroke in deeper pockets and permits ideal blade adaptation and angulation in areas where this is difficult to achieve with traditional intraoral fulcrums.

Elements of the Extraoral Fulcrum

Some clinicians believe that extraoral fulcrums should not be used because they are too unstable and may result in slipping and injury to the patient. This is very true if a one-point finger rest is attempted, however, the extraoral hand rest as described here uses a substantial portion of the front or back surfaces of the fingers and hand.

There are three essential elements for a stable extraoral hand rest.

The first involves maximizing the surface area of contact between the hand and the patient’s face (Figure 4). Usually a second element is the firmness used in placing the hand rest. Secure extraoral hand rests depend on the establishment of pressure against the face and underlying bone that is equal to that exerted against the tooth by the blade. A reinforcing finger from the nondominant hand can also be used to maintain adaptation and force (Figure 5).

The final element of an effective extraoral hand rest is an extended grasp. Sitting in a 9 o’clock position, place the thumb in a dominant position approximately one-third of the way down the instrument handle, away from the working end (Figure 6). The modified location of this grasp is necessary because without the extension, the instrument will not span the distance between the tooth surface and the hand rest. Clinicians accustomed to intraoral finger rests may be reluctant to use this grasp because they believe that instrument control is dependent on a grasp close to the working end. This is a common misconception. It is the fulcrum pressure, rather than the closeness of the grasp, that determines whether a stroke will be well controlled. Lack of control occurs when inadequate pressure is applied to the hand rest. 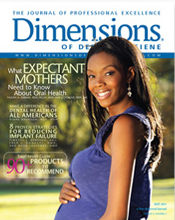