Expand your caries armamentarium with these technologies.

As dental caries is one of the most common diseases worldwide, oral health care professionals are always looking to add new, effective instruments to their caries management armamentarium. The availability of calcium and phosphate in the remineralization process is essential. A variety of calcium phosphate technologies are currently available in professionally-dispensed and over-the-counter oral health care products that may help limit the progression of carious lesions and enhance the repair of early lesions already present.

THE ROLE OF FLUORIDE

ACP technology was developed in 1991 by the American Dental Association’s (ADA) Paffenbarger Research Center. ACP contains the same minerals found in hydroxyapatite and aims, in the presence of fluoride, to speed up remineralization. ACP technology is considered unstablized because a calcium salt and a phosphate salt are delivered separately (eg, through a dual-barrel syringe). This delivery system allows for the precipitation of ACP at the tooth surface. Because it is not a premixed calcium phosphate compound, when ACP is introduced onto a tooth surface, a reservoir of calcium and phosphate ions forms. Rapid deposition of new mineral then may fill surface defects on the original tooth surface.5

ACP is available in a variety of products, including dentifrices, prophy pastes, fluoride varnish, fluoride gels, pit and fissure sealant materials, desensitizing agents, cements, and tooth whitening agents. In a dentifrice, ACP, with fluoride, enhances remineralization and forms a strong bond to the dentin, becoming an intrinsic part of the tooth.6-7 Sealants containing ACP promote in situ remineralization of artificially-induced carious lesions on smooth enamel surfaces, although not significantly more than sealants containing fluoride.8 Prophy paste with added calcium, phosphate, and fluoride has the potential to form ACP on the tooth surface.9 ACP-containing orthodontic com-posite resins may reduce enamel decalcification in patients with poor oral hygiene without dam-aging the cement’s shear bond strength.10,11 The addition of ACP in carbamide peroxide whitening agents may reduce transient tooth sensitivity caused by the whitening process.12

Most studies in support of ACP are animal model, in vitro, or in situ caries model studies. Although the use of ACP to assist in the remineralization process shows promise, more clinical trial research is needed. One clinical trial demonstrated a significant decrease in root caries among 44 high-risk head and neck radiation patients with the use of a dual phase ACP dentifrice containing 1,100 ppm sodium fluoride in comparison to a toothpaste containing 1,100 ppm sodium fluoride only.13

Casein (milk protein) was first investigated as a way to reduce caries as early as 1946.14 The University of Melbourne, Australia, and the Victorian Dairy Industry Authority, Abbotsford, Australia, are credited with the patent for the CPP-ACP complex and its trademark Recaldent. The FDA designated Recaldent as a “generally recognized as safe” (GRAS) ingredient to add to food products in 1999.15

CPP-ACP is referred to as stabilized ACP and is a complex of casein phosphopeptides that stabilize an amorphous form of calcium phosphate to maintain the calcium and phosphate ions, ensuring their delivery into the tooth structure before they precipitate or crystallize. CPP-ACP readily binds to the surface of the tooth as well as to the bacterial plaque surrounding the tooth.16,17 The CPP-ACP complex also acts as a reservoir of bioavailable calcium and phosphate. Under acidic conditions, CPP-ACP releases calcium and phosphate to enhance remineraliza- tion.18 Recently, CPP-ACP added to milk and hard candy (not available in United States) significantly remineralized enamel subsur- face carious lesions in situ.19,20

Products containing CPP-ACP that are currently on the market in the United States include one professionally-dispensed cream available with and without added fluoride and one chewing gum. The use of a CPPACP cream has demonstrated significant regression of white-spot lesions in postorthodontic populations.21,22 A recent in situ study using CPP-ACP combined with 900 ppm fluoride found that the combination offered a higher remineralization potential than CPP-ACP alone.23 Gum with added CPP-ACP demonstrated higher amounts of remineralization of enamel subsurface lesions in situ than sugar-free gum alone.24 A true milk allergy (casein) is a contraindication to using a product containing CPP-ACP.

As with ACP, the majority of investigations of CPP-ACP are animal model, in vitro, and in situ caries model studies. Although lower level evidence, published case reports are growing. A recent 2-year clinical trial conducted on 2,000 children demonstrated that CPP-ACP in a sugar-free chewing gum slowed progression and enhanced regression of approximal caries compared to a sugar-free control gum.25 To achieve this benefit, participants in the study chewed the gum for 10 minutes, three times a day. More clinical trial research is needed to quantify that CPP-ACP can prevent or reverse carious lesions or the dental caries process.

CSP belongs to a class of compounds called bioactive glass that have been available since the late 1960s to help regenerate bone.26 CSP reacts in an aqueous environment, so when exposed to saliva, ions of calcium, phosphate, and sodium are released. The sodium helps buffer the acid and then with time, the calcium and phosphate ions are available to assist in remineralization. Originally developed for the treatment of dentinal hypersensitivity,27 a series of in vitro and in situ studies suggest that CSP has the ability to prevent dentin demineralization, remineralize root carious lesions, heal white spot lesions, and fill demineralized lesions.28

Most products available with CSP claim a reduction in tooth sensitivity and include toothpastes, desensitizing toothpastes, one prophy paste, and one air polishing powder. Added to a commercially available dentifrice containing strontium chloride (SrCl2), the CSP-containing paste was superior in reducing pain from air and cold water stimulus compared with the SrCl2 and placebo group.29 This reduction in pain was confirmed in a recent 6-week clinical trial where a 5% CSP paste reduced the visual analog scale score more than a toothpaste containing 5% potassium nitrate or a placebo.30

Much of the research conducted about CSP has looked at its role as a desensitizing agent rather than its ability to enhance remineralization and prevent demineralization. At this time, there are no published animal model or clinical studies supporting its anticariogenic effects. One published report details a series of in vitro studies and one in situ caries model study.

TCP is a new hybrid material created with a milling technique that fuses beta tricalcium phosphate (ß-TCP) and sodium lauryl sulfate or fumaric acid. This blending results in a “functionalized” calcium and a “free” phosphate, designed to increase the efficacy of fluoride remineralization.34,35 ß-TCP, which is commonly used in FDA-approved orthopedic applications to boost bone growth, is similar to apatite structure and possesses unique calcium environments capable of reacting with fluoride and enamel. While the phosphate floats free, these exposed calcium environments are protected, preventing the calcium from prematurely interacting with fluoride.35 TCP provides catalytic amounts of calcium to boost fluoride efficacy and may be welldesigned to coexist with fluoride in a mouthrinse or dentifrice because it will not react before reaching the tooth surface.36 When TCP finally comes into contact with the tooth surface and is moistened by saliva, the protective barrier breaks down, making the calcium, phosphate, and fluoride ions available to the teeth. The fluoride and calcium then react with weakened enamel to provide a seed for enhanced mineral growth relative to fluoride alone.

Products available with TCP include a 5,000 ppm sodium fluoride dentifrice and a 5% sodium fluoride varnish. One study that investigated the toothpaste found that it delivered more high-quality mineral above the surface and deep in the carious lesions, and provided superior surface and subsurface remineralization compared to a 5,000 ppm fluoride product alone.37 Another study found that the TCP toothpaste showed better subsurface remineralization when compared to a CPP-ACP-containing product.38 There are no published studies yet about TCP added to fluoride varnish.

All published studies supporting this material have been in vitro studies. The potential of TCP is promising, but more studies are needed, including clinical trials supporting its efficacy in boosting remineral ization.

Dental caries remains a complex, multifactorial, and infectious bacterial biofilm disease that involves two continuous processes—demineralization and remineralization of the tooth surface. The goal of remineralization therapy should be to strengthen teeth. Along with an under-standing of the patient’s caries risk and an adequate anti-plaque self-care program, successful management of the dental caries infection over a lifetime can be accomplished using evidence-based, clinically effective methods and products. Calcium phosphate products may offer patients added protection against the progression or repair of carious lesions, but more in vivo clinical trials are needed to determine their short-term and long-term effects and to establish their clinical relevance.

Michelle Hurlbutt, RDH, MSDH, is an assistant professor at Loma Linda University, Loma Linda, Calif, and director of the university's online BSDH Degree Completion Program. She is course director of cariology, nutrition, and pharmacology. Hurlbutt is also the 2010-2011 co-chair of the Western Caries Management by Risk Assessment (CAMBRA) Coalition.

Perio and Pregnancy—Is There A Link? 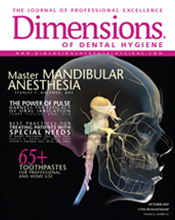