Clinicians need to be prudent when recommending X-rays, adhere to strict safety standards, and use proper technique when utilizing radiography in children.

The diagnosis of oral conditions and dental radiography are intricately linked. Radiographic exposures are used to diagnose interproximal caries, periapical infection, impacted teeth, and dental fractures to name a few, as well as to follow up on treatment outcomes. The use of dental radiography, however, is not without risk, as it exposes both patients and practitioners to ionizing radiation. Clinicians need to be prudent when determining the need for radiographs and adhere to the “as low as reasonably achievable” (ALARA) principle in order to reduce radiation exposure.

Because the risks associated with ionizing radiation are higher for fast-dividing cells and tissues, children are more vulnerable to radiation exposure than adults. Table 1 lists the radiation exposures for different types of radiographs, as well as the approximate background exposure that individuals experience every day. Despite the fact that these doses are relatively low, the potential risks of radiation exposure, especially among children, should not be ignored.1,2 Patients are more likely to undergo dental X-rays than medical exposures. This is important because it is cumulative exposure to ionizing radiation that is significant, as opposed to the dose per single exposure.

The three basic rules for safe radiograph exposure are justification, limitation, and optimization. Justification requires clinicians to ensure that radiographs are the only way to obtain the necessary information, and the exposure benefits the patient and outweighs the inherent risks. Limitation refers to following the ALARA principle. Optimization means that the image quality should be as high as possible. The traditional protocol of taking radiographs at specific time intervals is no longer valid. The capturing of standard X-rays, regardless of the patient’s health status, is also inappropriate.2,3

Two strategies can be implemented to adhere to the ALARA principle: collimation of the X-ray beam and use of the most sensitive (fast) image receptors. Collimation of the X-ray beam to the size of the image receptor (round to rectangular) will reduce the patient’s absorbed dose significantly (about 50%). It will also increase image quality because the radiation will be less scattered.2–5 Solid state sensors do not come in the same sizes as analog film or phosphor storage plates (PSP). Their bulky physical properties do not always allow the positioning required to capture the necessary information. PSPs, on the other hand, are vulnerable to bite marks and scratches. They can be protected by putting a piece of cardboard in the plastic barrier with the PSP or by taping wooden tongue depressors around them when taking (oblique) occlusal radiographs (Figure 1).

Occlusal radiographs of anterior teeth in the maxilla or mandible are easier to achieve. For an occlusal X-ray of the maxillary anterior teeth, place the patient upright in the chair in order to position the occlusal plane parallel to the floor. Position the image receptor on the occlusal plane and have the child close gently on the image detector. If a PSP is used, tape the plate between two wooden tongue depressors (Figure 1). This not only prevents bite marks, but it also helps the radiographer assess the position of the occlusal plane. Place the image detector with the long side transverse in the mouth if it involves primary incisors, or place the image detector with its long axis anterior-posterior if it involves permanent teeth. Aim the X-ray beam at a 65° downward angle, using the protractor on the X-ray machine, through the bridge of the nose. The image will be similar to a periapical radiograph from canine to canine.2

For an occlusal X-ray of the mandibular anteriors, position the child as described above, but aim the X-ray beam at a 45° upward angle through the tip of the chin. This will provide an image resembling a periapical radiograph from canine to canine.2 For the posterior teeth, the oblique occlusal technique can be very helpful. Patient positioning is the same, but the X-ray beam angle for the maxillary pre-molars is between 50° and 65° downward. For the mandibular pre-molars, the angle is between 25° and 30° upward. For the mandibular teeth, the child needs to turn his or her head to the opposite side, as the shoulders interfere with the correct angulation for the X-ray machine. This technique is subject to distortion, but in some patients, it is more appropriate than periapical radiographs.2

If intraoral radiographs cannot be obtained, the oblique lateral radiographic technique can be used.2 This can only be done with a film or a PSP in a cassette. The patient holds the cassette against the side of the cheek to be imaged. The nose should also touch the cassette. By doing so, the patient’s head is turned to the side of interest and the X-ray machine is aimed perpendicularly at the cassette, coming from behind the opposite ramus of the mandible. The patient turning his or her head creates a radiographic keyhole between the cervical spine and the ramus of the mandible. The obtained image resembles half of a panoramic radiograph. The technique can be extremely useful in small children or patients with special needs who cannot manage the capture of intraoral radiographs or remain still long enough to expose a panoramic radiograph.

Panoramic radiography is used to obtain an overview of the jaws. Proper patient positioning is key, as the focal trough is relatively narrow and structures outside the focal trough will not be projected in focus. The patient also needs to follow the instructions (biting end-to-end in the bite peg, lips closed around the bite peg, tongue against the palate, and no swallowing or movement for 18 seconds). Magnification and distortion are inherent to panoramic radiography, so the clinician should refrain from making measurements. Collimation of the X-ray beam reduces the absorbed radiation dose (Figure 3).2

Cephalometric radiographs are often taken for patients who need orthognathic surgery and/or orthodontic care. Patient positioning is important to the success of this technique, and patients need to be able to follow clinician instructions (teeth in occlusion, looking ahead, straight neck). The cephalostat can be rotated 90° so the machine can be used to take anterior-posterior images or posterior-anterior images of the skull, as well as submento-vertex radiographs. In recent years, cone-beam computed tomography (CBCT) is often substituted for these images.

CBCT devices are not standardized and manufacturers use different exposure parameters. CBCT enables imaging of tissues in three dimensions (axial, sagittal, and coronal planes) but also results in higher radiation dosing. Thus, the indications for CBCT should be carefully weighed against potential risks.1–6

Dental radiography is an important diagnostic tool in the treatment of children and can provide a broad range of information. The risks of radiation exposure, however, must be balanced against the knowledge gains that radiography provides. The decision to capture radiographs should no longer be based on recare intervals, but rather on diagnostic need.

Johan Aps, DDS, MSc, MSc, PhD, is a clinical associate professor and director of the Oral and Maxillofacial Radiology Clinic at the University of Washington School of Dentistry in Seattle. He is the author of several peer-reviewed papers, book chapters, and conference abstracts, as well as the recipient of scientific awards and a frequent speaker both in the United States and abroad.

Reducing the Use of Hospital Emergency Departments for Dental Care 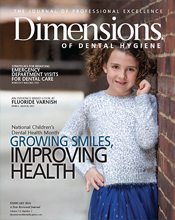