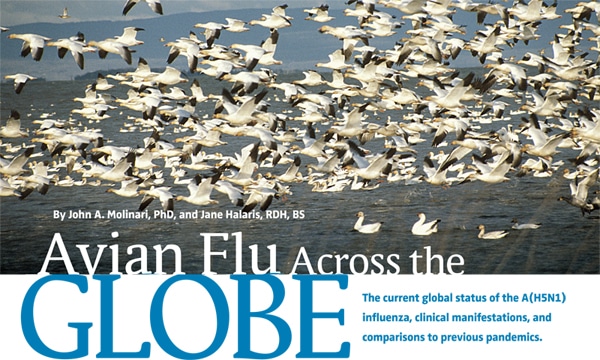 Avian Flu Across the Globe

The current global status of the A(H5N1) influenza virus, clinical manifestations, and comparisons to previous pandemics.

The spread of H5N1 avian influenza continues to be tracked and predicted in part by tracing migration patterns of wild birds from Asia. Detailed maps are readily available to show the current spread of viral infection in birds and humans. Although not a proven fact, bird migration is being studied as a possible way for H5N1 viruses to enter the United States. This possibility is shown in Figure 1, depicting how migratory bird travels might blanket North America, thereby possibly exposing domestic birds to this virulent type A influenza strain.1

According to the World Health Organization (WHO) and Centers for Disease Control and Prevention (CDC) as of May 8, 2006, there have been 207 confirmed cases of human infection with avian influenza A(H5N1) virus in nine countries (see Table 1). The lethality of this strain in comparison to those causing seasonal influenza outbreaks is evidenced by the fact that more than 55% (115) of those diagnosed with the disease have died.2 Other countries have reported outbreaks of A(H5N1) disease in poultry with possible

infections in humans, but these latter cases await confirmed diagnoses. Avian influenza is spread to other animals, including humans, primarily through fecal matter, althrough airborne transmission can occur from virus present in nasal and oral secretions.

The first avian influenza human cases attributed to A(H5N1) virus were reported in Hong Kong in 1997, with isolation of this strain from 18 infected people, six of whom died from the illness. This human outbreak coincided with a massive epidemic of highly pathogenic avian influenza (HPAI) in the region’s domestic poultry population. Widespread alarm was rapidly followed by emergency destruction of the entire poultry population of Hong Kong, approximately 1.5 million birds. This drastic, yet necessary, response has been credited with delaying the progression of A(H5N1) in Southeast Asia. Fortunately, subsequent infections in poultry and humans in the region did not appear again until 2003.

In 2003 and early 2004, however, new outbreaks among poultry in eight Asian countries signaled a precursor of the human infections to follow. Even with the destruction of more than 100 million birds in the affected countries, relief from the avian pandemic was only temporary. Reports of A(H5N1) currently continue with instances of infection in poultry and wild birds confirmed in Europe, Africa, and the Near East.

Influenza is caused by a highly infectious group of RNA viruses that are transmitted primarily via microbial-laden secretions in respiratory droplets. A sudden onset of constitutional and respiratory symptoms occurs after an incubation interval of usually 2 days (1-5 days), which typically are far more severe than those presenting with a cold. The most common influenza symptoms include a rapidly developing fever (100° – 104° F), cough, sore throat, and muscle aches.3 In contrast, illness following infection with A(H5N1) influenza virus can present with a wide range of symptoms ranging from those found with seasonal influenza to severe respiratory disease. These can rapidly develop into life-threatening respiratory complications as a worst case scenario.

Individuals diagnosed with the current A(H5N1) flu have experienced high fever and an unusually progressive influenza course, characterized by extensive fluid accumulation in the lungs with rapid deterioration and destruction of respiratory tissues. Early symptoms in a patient include diarrhea, vomiting, and chest and abdominal pain. Bleeding from the nose and gingiva have also been observed in some patients. The high mortality associated with A(H5N1) disease does not appear to be due only to viral pathogenicity. Compelling evidence exists indicating that an over-reaction by the infected person’s immune system against a replicating virus in respiratory tissues may be responsible for the massive accumulation of fluid and damage seen in many bird flu cases. This “cytokine storm” appears to be caused by a stimulation of inflammatory cytokines and chemoattractants in response to viral infection, leading to excessive migration and phagocytosis by host macrophages in affected tissues. The hyperactivated macrophages do not appear to distinguish normal from virus-infected cells, with the result often being weakening of blood vessels, edema, a dramatic drop in blood pressure, and the patient’s lungs filling with bloody fluid.4

Periodic influenza pandemics have been recorded for centuries. In the United States, three pandemics occurred during the 20th century. These lethal outbreaks represented three different influenza A virus subtypes.

With the Spanish influenza pandemic of 1918, the extent of human infection and number of subsequent deaths is unprecedented in history. Between 21 and 50 million people

died worldwide (an exact figure could not be determined), 500,000 deaths recorded in the United States alone.5 A major factor for the devastation was the exceptional virulence of the responsible A(H1N1) influenza virus, which was able to cause serious infections throughout the population, including a high mortality rate in a group not normally associated with death from influenza—healthy, young adults.6,7 The current scenario observed with A(H5N1) human infection is eerily similar. Could there be a similar consequence if or when A(H5N1) is able to routinely spread from person to person? Of special interest is the possibility that in both instances, a highly virulent strain may have acquired the capability of infecting humans by directly crossing the species barrier from pigs (1918) and birds (current outbreak).

STRATEGIES FOR TREATMENT AND PREVENTION 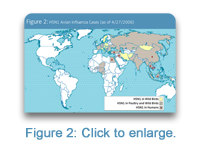 Although the major public health strategy for minimizing potential serious sequelae of influenza infections is annual vaccination, a number medications can be effective for prophylaxis and treatment of influenza. The four major antivirals are divided into two classes: the M2 ion channel inhibitors (amantadine and rimantadine) and the neuraminidase inhibitors (oseltamivir and zanamivir). Unfortunately, most cases of human A(H5N1) viral infections resulting in death are resistant to both amantadine and rimantadine. On the basis of accumulating information regarding increasing influenza virus resistance, the CDC recommended that neither of these agents be used for treatment or prophylaxis of influenza A in the United States during the 2005-06 flu season.8

While currently no commercially available human vaccine against A(H5N1) influenza virus exists, extensive and accelerated research conducted within the past few years has recently led to the development and testing of an effective possible candidate. This is a purified, subvirion vaccine administered intramuscularly in two relatively high (90 ug) doses. Analysis of antibody responses indicated that the vaccine stimulated neutralizing titers associated with protection against influenza. Of additional importance was the fact that the vaccine was generally well tolerated by recipients.9 In brief, despite the continuing release of alarming news and figures, the key to responding effectively to the current adaptation and spread of A(H5N1) in humans, may well be linked with how we prepare during this time of advance notice before a global human pandemic infection. 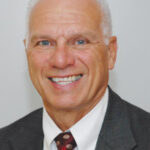 Jane Halaris, RDH, BS, is an adjunct instructor in the Department of Periodontology and Dental Hygiene at the University of Detroit Mercy School of Dentistry, Detroit. She is currently a member of the Michigan State Board of Dentistry and an examiner for the North East Regional Board Inc.

HIV and the Dental Team