How Can Antioxidants Be Used to Manage Periodontal Disease?

What are your thoughts regarding the use of antioxidants, such as green tea, to manage periodontal diseases?

QUESTION: What are your thoughts regarding the use of antioxidants, such as green tea, to manage periodontal diseases?

ANSWER: There is considerable interest in the use of antioxidant therapy to treat a variety of oral conditions, including periodontal diseases. Before discussing how antioxidants may benefit oral health, the basics of oxidative stress should be reviewed. Oxidation is the loss of electrons from an atom/molecule. Metal atoms are characterized by their tendency to be oxidized, a process in which the loss of one or more electrons creates positively charged ions. The electrons lost by metal atoms are then gained by nonmetal atoms, forming negatively charged ions.1

Disturbances in this normal redox state can cause toxic effects through the production of reactive oxygen species that damage all components of cells, including proteins, lipids, and DNA. Oxidative stress is caused by an imbalance between the production of reactive oxygen species and the ability to either detoxify these reactive intermediates or repair the resulting damage. This ongoing process is associated with normal metabolic function but is influenced by environmental factors and other sources of oxidizing activity.2 In the oral cavity, environmental factors that increase free radical production include exposure to bleaching agents, dental cements, and restorative materials.

The good news is that the human body creates antioxidants to prevent the overproduction of free radicals. One natural antioxidant is glutathione, which can be produced by any cell but is primarily synthesized by the liver. Another is coenzyme Q10 (CoQ10), which is found in mitochondria and in cells of the heart, liver, kidneys, and pancreas. CoQ10 may also be obtained by consuming meat and seafood or as a dietary supplement. Other popular dietary sources of antioxidants include vitamin C and vitamin E.

The body possesses other natural mechanisms to defend against the damage caused by free radicals. Moderate oxidation can trigger programmed cell death, while more intense stresses may cause nonprogrammed cell death. Reactive oxygen species, however, are not always harmful; in fact, they are sometimes beneficial. For example, they can be used by the immune system to attack and kill pathogens, as well as in cell signaling mechanisms for cellular communication.

Oxidative stress is associated with many diseases of aging, including atherosclerosis, Parkinson’s disease, and Alzheimer’s disease.2 Chronic inflammation induces oxidative stress—thus, the relationship to periodontitis—and damage to cellular DNA and RNA. As health depends on the balance between oxidative stress and antioxidant activity, some believe that antioxidants may benefit oral health. Many oral health products contain CoQ10, and debate continues on the benefits of vitamin C on periodontal tissue health.

The production of pro-inflammatory chemical mediators in response to periodontal pathogens increases oxidative stress.3 Studies have demonstrated that salivary and plasma levels of antioxidants are lower in patients with periodontal diseases, and as the extent of periodontal destruction increases, so does reactive oxygen species activity with a corresponding decrease in protective salivary antioxidant levels.3,4 CoQ10 has been used both topically and systemically for the treatment of periodontitis, either alone or in combination with vitamin C and vitamin E; however, the evidence supporting its use to reduce bleeding and pocket depth remains weak.

In addition to ongoing research regarding periodontitis, antioxidant use has been studied in relation to oral cancer, lichen planus, aphthous stomatitis, and cariogenic bacterial growth.5 Many published papers have investigated the effects of antioxidants, though more evidence is needed to support how best to deliver antioxidants for managing oral disease. Tea, both green and black, contains antioxidants, but there is no compelling evidence to demonstrate that its consumption improves periodontal outcomes.

The Danger Is Real

How to Discuss Fees With Patients 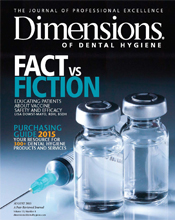