This type of periodontitis can be devastating to patients and difficult to treat for clinicians.

Aggressive periodontitis was defined by the 1999 International Workshop for the Classification of Periodontal Diseases according to three primary characteristics: absence of systemic conditions that might contribute to periodontal disease, rapid loss of clinical attachment and alveolar bone, and familial aggregation of diseased individuals.3 A number of systemic conditions, such as diabetes and cardiovascular disease, have been implicated in the development of periodontitis in susceptible patients. Because this conclusion has been drawn mainly from case reports and not controlled clinical studies, the exact nature of the association has yet to be determined. It is thought that the most significant effect of these systemic conditions is alteration of the host immune response.4

In aggressive periodontitis, attachment loss occurs at a much faster rate than in chronic periodontitis, the more common variant. Because the course of destruction occurs rapidly, evaluation of historical, radiographic, and clinical data is necessary to estimate the start of disease. Some clinicians insist that massive attachment loss in a relatively young patient automatically indicates a rapid disease progression. However, severe attachment loss can also be seen in a periodontitis-susceptible patient with a long-standing history of poor oral hygiene, even with a slow rate of progression. Thus, it was deemed inappropriate to use age alone as a primary characteristic to differentiate between the different subtypes of periodontitis.5

In patients with aggressive periodontitis, the quantity of plaque deposition is often inconsistent with the severity of tissue destruction. In most cases, the gingiva appears clinically healthy with no signs of inflammation, and calculus deposits are minimal. However, plaque and calculus deposits are visible in some patients, and clinical inflammation is present in cases of advanced disease.7

Properly functioning neutrophils are necessary to maintain periodontal health. This is evidenced by the large number of genetic neutrophil defects associated with severe periodontal diseases. These include, but are not limited to, Kostmann syndrome, Chediak-Higashi syndrome, Papillon-Lefevre syndrome, alpha-1 antitrypsin deficiency, leukocyte adhesion deficiency, and granulomatous disease. The proposed mechanism for periodontal disease development among those with abnormal neutrophil function seems to be ineffective chemotaxis (cell movement in response to chemical stimuli) and phagocytosis (process by which living cells ingest other cells). The consensus is that chronic activation of certain enzymes like protein kinase C and down-regulation of others, such as diacylglycerol kinase, decreases chemotaxis and phagocytosis, and, ultimately, antimicrobial activity.8

Immunological mediators play a role in the pathogenesis of several oral diseases—periodontal disease among them. The initiation of periodontal disease requires the presence of bacteria, as well as a susceptible host. To handle the continuous microbial challenge present in subgingival biofilm, the immune system activates specialized cells known as macrophages to protect itself. When the microbial challenge overwhelms the immune system, exacerbated tissue destruction results.9

Aggressive periodontitis is classified into localized and generalized forms. The localized form largely affects permanent incisors and first molars. The generalized form mostly affects the permanent dentition (Figure 1). Controversy exists as to whether the two are distinct entities or they are two forms of the same disease.10 Evidence supports the notion that in some cases localized disease progresses to a generalized form as a patient ages, while in other cases characteristics of both diseases are prevalent in the same individual. Conversely, one study suggested that the two might be unique entities because individuals with localized aggressive periodontitis (LAP) responded well to treatment, whereas those with generalized aggressive periodontitis (GAP) continued to demonstrate tissue destruction despite treatment.11 Many authors who have studied periodontal disease in a young population (age 15 to 30) have noted that the clinical periodontal characteristics and other demographic data of this group differ strikingly from the features of periodontal destruction in older individuals. In fact, the 1989 classification system adopted by the American Academy of Periodontology was based largely on age of onset and rate of progression. Young individuals with signs of periodontitis were deemed to have juvenile periodontitis, and patients with a rapid rate of tissue destruction were diagnosed with rapidly progressive periodontitis. This system generated much criticism, so a new classification system emerged. Highfield12 notes that the difficulty in establishing a uniform set of criteria for the classification of periodontal diseases lies in the heterogenicity of the clinical presentation and lack of understanding of the true nature of the differences in clinical presentation. For instance, a number of studies support the notion that LAP tends to occur between the ages of 11 and 13. However, based on the amount of periodontal destruction seen at the time of detection, it is assumed that the disease process began earlier.13 Furthermore, LAP differs from GAP in that the former has a distinct microbial etiology: Aggregatibacter actinomycetemcomitans (Aa). Aa was first identified as a periodontal pathogen in 1975. Since then, most cross-sectional studies have shown it to be associated with periodontal disease in adolescents. Fine et al14 followed 96 students for 1 year to determine whether harboring Aa would lead to bone loss, a major indicator of aggressive disease. The authors noted that six of 36 Aa-positive, initially healthy children were found to have bone loss at the 1-year follow-up compared with none of the 58 Aa-negative children. They concluded that Aa is associated with bone loss, but not all subjects who carry Aa will develop periodontal disease.14 A more recent study looked at the association among serum IgG responses to a number of periodontal pathogens, including Aa, Porphyromonas gingivalis (Pg), and Tannerella forsythia (Tf). Although only the deepest pockets in each quadrant were examined, the authors found no differences in microbial levels between GAP and LAP. The authors showed than in GAP subjects, levels of Pg, Tf, and Aa correlated with clinical parameters, but not with serum IgG. However, neither variable correlated with disease severity in LAP. Furthermore, there was no difference in serum response to Pg and Aa among patients with GAP and LAP. High antibody titers to TF were found in more than one-third of GAP patients but they were undetectable in those with LAP.15

Historically, patients with aggressive periodontitis have experienced poor outcomes, and radical treatments were often implemented. More recently, however, the effectiveness of surgical and nonsurgical periodontal therapy has been demonstrated. Phase I is the first step in periodontal therapy, and its goal is to significantly decrease or eliminate the microbial load as well as factors that contribute to periodontal disease. These include, but are not limited to, supra- and subgingival instrumentation to remove calculus, treatment of food impaction areas, and restoration of caries lesions. Some authors argue that nonsurgical therapy alone may be sufficient if the disease is in its early stages. Bouziane et al16 looked at clinical and radiographic outcomes of patients with GAP who were treated with nonsurgical therapy alone at intervals of 3 months, 6 months, and 5 years post-treatment. The authors concluded that this therapy resulted in termination of disease progression, resolution of inflammation, decreased pocket depths, and other favorable clinical outcomes.16

The management of aggressive periodontitis remains a challenge for clinicians because of a lack of standardized protocols for effective disease control. For instance, a subset of aggressive periodontitis patients may continue to exhibit periodontal destruction due to persistent periodontal pathogens. These patients often require adjunctive local and systemic chemotherapeutic therapy. Typical systemic antibiotic regimens have included amoxicillin and metronidazole, although other classes of antibiotics are proving to be effective, as well. One group of researchers evaluated the efficacy of adjunctive moxifloxacin in the treatment of GAP. They concluded that when compared with scaling and root planing with placebo, adjunctive moxifloxacin therapy achieved significantly greater improvement in bleeding on probing, pocket depth, and clinical attachment gain.17 However, antibiotics are not magic bullets, and they present some disadvantages such as adverse systemic effects and allergic reactions. Alternately, Moreira et al18 describe antimicrobial photodynamic therapy, a novel adjunct to traditional instrumentation and antimicrobial therapy. The principles of this treatment rely on the elimination of microbial cells through the use of a photosensitizing agent and a low-intensity laser light source. After a controlled, randomized, double blind study, the authors concluded that scaling and root planing combined with antimicrobial photodynamic therapy promoted more reduction in periodontal pocket depth than scaling and root planing alone at the 90-day follow up.18

Phase II of periodontal therapy involves surgical procedures with the intention of improving the prognosis of teeth or their replacements, and enhancing esthetics. This is accomplished via a number of surgical options, including, but not limited to, resective procedures— such as gingivectomies and osseous resections—and regenerative flaps with grafts. These procedures are not meant to treat disease, but rather to provide an environment that is conducive to healing of mucosal and gingival tissues. As such, periodontal surgery is often performed on noninflamed tissue and in the absence of periodontal pockets. Recently, many new technologies, such as lasers, have been proposed for periodontal surgery. Most aim to replace the use of scalpels, curets, electrocautery devices, and other established surgical instruments. However, more research is needed to demonstrate the efficacy of these new technologies.19

Aggressive periodontitis is the rarest form of periodontal disease and the least understood. Until additional high-quality research provides evidence on the most effective treatment approach, clinicians must be vigilant in identifying the clinical signs of aggressive periodontitis so that a variety of strategies can be implemented as early in the disease process as possible.

This 14-year-old teenage girl presented with localized aggressive moderate periodontitis. The patient underwent microbial testing to obtain a sulcular sample collection of anaerobic subgingival periodontal pathogens. After analysis of the results, she was prescribed an antibiotic regimen of amoxicillin and metronidazole and four quadrants of scaling and root planing. Data collected 2 years later show that the patient remains periodontally stable (Figure 3 and Figure 4). However, increased levels of bleeding on probing, probing depth, and clinical attachment levels indicated the presence of residual mild localized periodontal disease. In the follow-up microbial testing 2 years post-treatment, the bacteriological analysis revealed increased risk of disease, yet the spectrum had changed and the susceptibility of the microbial subgingival flora had shifted. The patient is maintained in close intervals (2 months to 3 months), as risk of disease and predilection to periodontitis are high in this case. Oral hygiene has to be aggressive and vigorous and may include antimicrobial daily mouthrinse, interproximal cleaning, and use of an oral irrigator and powered toothbrush.

Diana Bronstein, DDS, MS, MS, is an associate professor in the Department of Periodontology at Nova Southeastern University College of Dental Medicine in Fort Lauderdale, Florida. She is a diplomate of the American Academy of Periodontology and a diplomate and fellow of the International Congress of Oral Implantology. She can be reached at [email protected]

Dmitriy Kravchenko, MPH, is a student in Nova Southeastern UniversityÍs dual medical and dental degree program. In 2017, he will graduate with both a doctor of dental surgery and medical doctor degree. 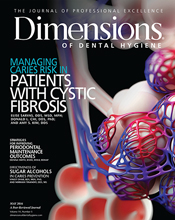