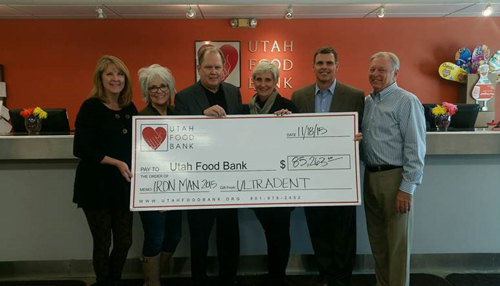 SOUTH JORDAN, Utah, November 24, 2015 – Ultradent Products, Inc. held its annual food drive this year, promoted with an “Ironman” theme, as the company aimed to raise as much food and money for the Utah Food Bank as possible within a three-day intensive push. Within those three days, Ultradent was able to raise $85,263, which translates to 341,036 lbs. of food that will help feed needy people and hungry families this holiday season and throughout the year. This annual food drive has become a cherished and much looked-forward to tradition for Ultradent employees and their families, who have each year, stretched to help give back to those around them less fortunate. Throughout its history with the Utah Food Bank, Ultradent has helped raise 1.2 million pounds of food since the tradition began in 2011, though often times splitting their donations between the Utah Food Bank and victims of world tragedy, such as those affected by Typhoon Haiyan in 2013.

Donations for Ultradent’s 2015 food drive were raised through numerous opportunity drawings, bake/pop-up boutique sales, several “Food Truck Friday” events, and a charitable golf tournament, all organized by company employees. Ultradent presented a check for $85,263 to the CEO of the Utah Food Bank on Thursday, November 19, 2015.

Dr. Fischer, Ultradent’s president and CEO, attributes his enthusiasm for the food drive to lessons he learned as a young boy. He says, “My grandfather taught me as a young boy that it is only with an open hand that one has the ability to receive.”

The American Association of Orthodontists Foundation Announces Establishment of the McNamara Award Honoring Contributions and Career of Dr. James McNamara