The Use of Laser Fluorescence in Sealant Monitoring

While this technology shows promise, the research is mixed on its ability to detect decay beneath sealants.

Dental sealants are an evidence-based strategy to prevent incipient dental caries on occlusal pits and fissures. They have been widely used in both private practice and community health settings. The American Dental Association and American Academy of Pediatric Dentistry have ­published guidelines for pit and fissure sealants for incipient, noncavitated restorative needs.1,2 These protocols provide insight on which types of pit and fissure sealants have the best retention rates and provide the most effective protection against caries. A recent Cochrane review found that resin-based sealants have the highest retention rates (71% to 85%) of commonly used sealant materials.3

Once practitioners have placed sealants, monitoring their retention is essential. The conventional technique for evaluating pit and fissure sealants includes assessment of sealant margins through visual-tactile examination and radiographic evaluation. Practitioners should examine the marginal aspects of the existing sealant material to determine if it is partially or fully retained. This method has limited effectiveness when trying to diagnose caries progression under existing sealants because practitioners can’t see the tooth structure under the sealant.

When a clinician suspects there is caries beneath the sealant, he or she has three options: consider other prevention strategies, replace the sealant, or apply a restoration. Radiographs can aid in assessing caries under sealants, but specificity and sensitivity are relatively low.4 The inability to quantitatively evaluate caries activity and monitor retention of existing sealants poses challenges to sealant efficacy.

Detecting caries in pits and fissures on occlusal surfaces is difficult.5 The use of laser fluorescence in detecting structural changes in occlusal and cervical areas of unrestored teeth has relatively high specificity and sensitivity.6 Laser fluorescence detects changes in the tooth structure by measuring the amount of fluorescent light the tooth surface emits. Sound tooth structure emits very little fluorescence, while areas of demineralized or cavitated lesions will fluoresce. This caries assessment tool has become popular in private practice settings as an adjunct to conventional assessment tools. The efficacy and reliability of laser fluorescence, however, has not been established. Its reported sensitivity and specificity in diagnosing caries under existing sealant material vary greatly among studies.6–9

Initial studies conducted more than 10 years ago found promising evidence that laser fluorescence was beneficial in assessing existing sealants for caries. As the interest in laser fluorescence has grown, its efficacy in evaluating tooth structure under pit and fissure sealants has been heavily scrutinized. Research conducted on the modality’s effectiveness over the past decade has been inconsistent.3 The variation in findings may be due to the type of resin-based sealant used (filled, unfilled, clear, or opaque), preparation and procedure technique, thickness of the material, and whether the tooth was permanent or deciduous.

An additional study found that laser fluorescence overestimated caries lesions under opaque resin-based sealants.9 Researchers showed that the age of the material, the presence of staining, or operator fatigue all influenced fluorescence measurements, sometimes providing misleading results. The researchers suggested that future studies be conducted to evaluate the reliability of laser fluorescence in detecting caries under existing sealants in a clinical setting.

Research demonstrates that laser fluorescence is beneficial as an adjunct for diagnosing initial incipient caries on occlusal and cervical areas, but further research is needed on whether this technology can aid in assessing existing sealants.6,10,11 A quantitative measure of caries progression could reduce the fear many oral health professionals have about placing sealants on incipient lesions. Unfortunately, the research on the efficacy of laser fluorescence in assessing existing pit and fissure sealants is limited. Validated study designs and data collection tools would aid in identifying the effectiveness of this assessment tool. Numerous studies have been conducted in vitro that do not investigate intraoral influences or variations in application among different brands.3–7 Additional clinical studies are needed that replicate in vivo conditions. Inconsistencies in the products tested, thickness of material, tooth preparation, instructions for placement, and clinical application clearly contribute to the differing results found in much of the published literature.

Studies that recognize the threshold values for fluorescent reflection of sealant materials are needed to generalize findings in a clinical setting. Identifying these thresholds can give practitioners a quantitative measure for evaluating caries progression under sealant materials. At this time, practitioners should not rely on laser fluorescence as a primary assessment tool. Clinical visual-tactile examination should be used until further studies provide conclusive results. Just as with conventional assessment tools, clinicians should never rely on one assessment modality to identify risk or caries presence.6–9 Evidence shows that the frequent monitoring of sealants through conventional methods should not be excluded when evaluating pit and fissure sealants.1–3

While technology may eventually provide an accurate assessment tool for caries detection under sealants, practitioners must be knowledgeable about the limitations of current devices. There are several factors that can impact a reliable diagnosis, and further research is needed to investigate these factors. At this juncture, clinicians should avoid relying solely on the assessment ability of laser fluorescence. This technology has a place in clinical practice for analyzing incipient caries, but further research is needed before expanding its use in assessing caries under existing sealants. For now, clinicians must rely on a thorough clinical evaluation with a comprehensive assessment of patients’ risks factors. At this time, there is no one assessment tool that can accurately detect and diagnosis dental caries.

Rebecca Tranmer, RDH, MSDH, is a full-time faculty member in the dental hygiene under graduate program at Idaho State University in Pocatello. She has more than 25 years of experience in the dental field as both an educator and clinician. Tranmer's interests include oncology, radiology, and restorative therapies. 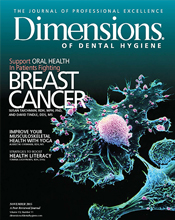