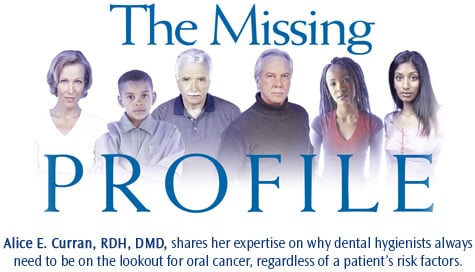 Alice E. Curran, RDH, DMD, shares her expertise on why dental hygienists always need to be on the lookout for oral cancer, regardless of a patient’s risk factors.

Q. Is there a specific profile for an individual who will develop oral cancer?

A. No, there really isn’t. We used to think that oral cancer patients were older men who smoked and drank too much. Most of these oral cancers, about 75%, appear in people over 65 who have a long history of alcohol and tobacco abuse, however, that leaves 25% of oral cancer patients who don’t smoke or drink and who may be under the age of 40.1 I have even seen oral cancers in children as young as 5.

There’s no true “profile” of who gets oral cancer. This has clinical implications because we can’t disregard doing an examination on a 35-year-old Caucasian woman who doesn’t smoke. Oral cancer exams need to be done on every patient, not on just people who fit a specific profile.

Plus, the demographics of who is most at risk for oral cancer often shifts. There used to be six men for every woman with oral cancer but that ratio has changed over the past 20-30 years and now the ratio is two men to one woman.1 Profiling is actually detrimental to our goal of finding oral cancers early in all of our patients.

Q. Is the increase of oral cancer in women due to their growing use of tobacco?

A. Yes, that’s the hypothesis. There are some other factors that can cause oral cancer and they may disproportionately affect women but these factors are still being researched.

Q. Are there certain ethnic groups that are at a higher risk for oral cancer?

A. Cancer happens twice as much in the African American population as it does in the Caucasian population. Asian Indians have a higher incidence of oral cancer.2 India has the highest oral cancer rate in the world. There is an oral habit in South East Asia where people chew on a concoction of leaves, tobacco, and different spices called bête quid or paan. Parts of the concoction are the leaf of the betel palm tree and the areca nut. Chewing on this mixture is known to cause cancer, however, there is also a very high smoking rate among Asian Indian people.

Q. Is the incidence of those getting oral cancer without the traditional risk factors of tobacco/alcohol use a new trend or one that just wasn’t caught previously?

A. That’s difficult to say without a lot of epidemiological digging. Some evidence suggests that there is a reason why people who don’t drink and smoke might be getting oral cancer. We think that human papilloma virus (HPV) may be a risk factor for oral cancer. There are about 100 human papilloma viruses and a few of them are known to cause cervical cancer in women. The vaccine Gardisil®* is being marketed to young girls to prevent them from contracting HPV that might cause cervical cancer but recent studies have shown that nonsmokers and nondrinkers who have oral cancer have the strains of HPV associated with those cancers.3 These same viruses that cause cervical cancer may be causing some of these oral cancers in nonsmokers and nondrinkers.

Walking for the Cause

HPV-associated oral cancers appear mostly in the posterior area of the mouth whereas tobacco-related oral cancers tend to appear more in the front of the mouth. There seems to be a trend that tobacco-related oral cancers occur on the side of the tongue and underneath the tongue. Oral cancers related to HPV tend to be located on the back of the tongue and the tonsillar area and then further down. These are some recent observations. If in the future we do learn that these HPVs are responsible for some oral cancers, then we might see the vaccine become available to the general population to prevent oral cancer. This is speculative, there is no definitive research yet, but extensive work is being done in this area.

Q. If oral cancer is found early, what are the chances of survival?

Q. Why has the death rate from oral cancer not improved over time?

A. We are still not detecting oral cancer early enough. We still have the mindset that it is a disease of older people who smoke. This needs to change. If oral cancer is detected early, then the patient has a much better chance of surviving. There are four stages of oral cancer and the vast majority of oral cancers are found in stages three and four when the cancer has spread, which decreases a patient’s chance of survival. We need to find the cases that are in stages one and two.

Here at the University of North Carolina, we find oral cancer in patients under 40 about once a month. We don’t know all of the causes of oral cancer yet. Once comprehensive exams are being performed on every patient, the death rate will likely start to fall. Another factor is that only about 60%-65% of adults in the United States go to the dentist every year. The frequency is less among senior citizens, where 20% hardly ever go to the dentist and among those 66 and older, one-in-four never goes.6 Many patients who are at risk for oral cancer may not even be seen by a dental professional, who is the best person to detect the disease early.

Oral cancer is the sixth leading cause of death among men.5 More people die from oral cancer than from cervical cancer or melanoma.5 But oral cancer is not one of the cancers that is publicized on the news very often even though it is so deadly. I think this is due to a lack of public awareness. Dental students at New York University, New York, have started an oral cancer walk (see sidebar), which I think is a great strategy to get the word out and some of us at the University of North Carolina would like to start a similar event.

Gearing Up for Ergonomic Practice 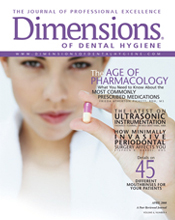