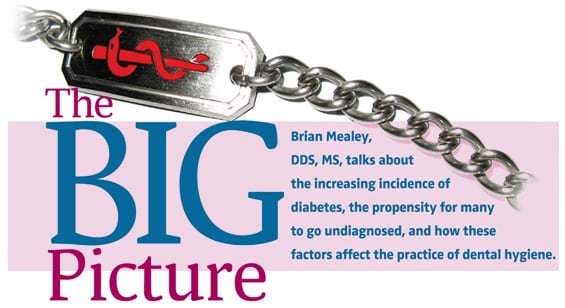 Brian Mealey, DDS, MS, talks about the increasing incidence of diabetes, the propensity for many to go undiagnosed, and how these factors affect the practice of dental hygiene.

Q. What is the current prevalence of diabetes in the United States?

A. According to the latest data from the Centers for Disease Control and Prevention (CDC) compiled at the end of 2005, 20.8 million Americans have diabetes, with more than 6 million of these undiagnosed.1,2

Q. What is the difference between type 1 and type 2 diabetes?

A. People with type 1 diabetes are insulin dependent, meaning they absolutely require insulin administration to survive. The onset of type 1 is usually acute. Patients become symptomatic with excessive urination, sudden weight loss, and consistent thirst. Within a very short period of time, most seek medical attention.

Insulin is necessary to allow glucose to enter cells, like muscle cells, where glucose is used for energy. Glucose is too big of a molecule to pass through the cell membrane without a facilitator, like insulin. Insulin acts like a key to the cell door, allowing glucose to enter. After we eat, carbohydrates are broken down in the stomach and intestine into glucose molecules, which are absorbed into the bloodstream. The pancreas then secretes insulin, which goes out to the target cells (like muscle), binds to a specific insulin receptor, and “opens” the cell door to allow glucose to pass across the membrane. If insulin is not present, glucose cannot enter the target cells, so it stays in the bloodstream and the person becomes hyperglycemic (high blood sugar levels). So when a person with type 1 diabetes eats something, the blood sugar goes up; no insulin is produced in the pancreas so the glucose stays in the bloodstream. Eventually the muscle is still very hungry so it looks for an alternative source of energy. The energy source it turns to is fat. Fat is broken into glycerol and free fatty acids. The glycerol is used by the muscle for energy but the fatty acids begin accumulating in the bloodstream. And so the level of these acids in the bloodstream increases and the person becomes acidotic. These acids are eventually converted in the liver into ketones, which are really large molecules that when excreted carry large amounts of water with them. So patients become dehydrated and thirsty all the time. Then patients may experience diabetic ketoacidosis, where the levels of ketones are so dangerously high that a coma and even death can ensue.

Type 2 diabetes is a very different problem. People with type 2 diabetes still make insulin but the insulin doesn’t work effectively to open the cell door on the muscle cell. This happens because the muscle becomes resistant to the insulin that the patient’s pancreas is making. The tissues are resistant to insulin but they don’t completely stop the effect of insulin, so enough glucose is entering a muscle cell that the cell is not starving. Thus, patients do not start to break down fat so they don’t experience acidosis or ketoacidosis. In fact, most people with type 2 diabetes probably have the disease for many years before they’re diagnosed. This is a problem because complications may be setting in and patients don’t even know they have the disease.

Q. How do people not know they have diabetes? 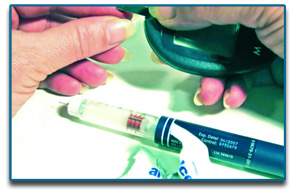 A. People with type 1 diabetes show the classic signs of excessive thirst, excessive urination, excessive sense of hunger, and rapid weight loss. Sometimes vision changes also occur. These symptoms often come on quickly. But people with type 2 diabetes often don’t know they even have the disease. They may have a little bit of thirst and some excessive urination, especially after the process progresses and the tissues become more and more resistant to insulin. However, even though they don’t have symptoms, their blood sugars are not normal. Often people with undiagnosed type 2 diabetes have terribly high blood sugar levels that are damaging their organs and tissues, like the periodontium, the retina of the eye, and the kidneys. They may have the process going on for years before they are ever diagnosed.

Dental professionals can play a part here. During an examination, a dental professional can see that something is amiss in a patient with undiagnosed type 2 diabetes. A patient may not have a great deal of calculus but is experiencing an intense inflammatory response. A patient may have multiple periodontal abscesses. He or she may have severe bone loss and periodontal pocketing, in excess of what might be expected given the patient’s level of local factors or other risk factors for periodontitis. Dental professionals can then ask the patient questions designed to assess the risk for possible undiagnosed diabetes:

A. Yes, it is an issue with the insulin receptor on the muscle cell. A defective binding of insulin with its receptor exists or a defective signal is being sent into the cell after the insulin binds with the receptor. Either way, the muscle cell doesn’t get the message that it needs to let glucose in so the glucose stays out in the bloodstream.

Type 2 is a disease strongly associated with obesity and aging. The number one risk factor for type 2 diabetes is obesity because one of the primary causes of insulin resistance is the presence of pro-inflammatory cytokines. One of the major sources of pro-inflammatory cytokines in the body is fat cells, which are very metabolically active. They produce three or four really critical hormones and massive quantities of certain pro-inflammatory cytokines. As people’s body mass indexes increase, the fat cells grow in size and in metabolic activity. Therefore, obese people have higher levels of these cytokines in their serum than normal weight people. These cytokines directly interfere with the muscle cell and the way insulin acts on the muscle cell.

Q. How does this relate to periodontal disease?

A. People with fairly significant generalized periodontitis have higher serum levels of pro-inflammatory cytokines. Not just around the teeth but also in the serum itself.3,4 Patients with advanced periodontitis have elevated serum inflammatory mediators. This serum goes out to the muscle cells. Elevated inflammation increases insulin resistance. So if a patient has elevated inflammation due to periodontal disease, this encourages insulin resistance. This link was first identified in medicine with just normal types of conditions, such as upper respiratory tract infections.5 Researchers found that when diabetic patients are ill with bacterial or viral infection, their insulin resistance goes up by more than 50%.6 This happens in everybody, not just in people with diabetes. As the body tries to fight off the infection, the level of inflammatory mediators increases in the serum and insulin resistance results. In response to the insulin resistance, those who do not have diabetes simply secrete more insulin from their pancreas, which eventually gets all of the glucose from any food ingested out of the bloodstream and into the muscle. For those with diabetes, however, their insulin resistance becomes even greater than it normally is. This is why when people with diabetes become ill, they often go on what’s called a “sick day regimen.” For those injecting insulin, they usually need to inject more when they are ill because they need more insulin to get the glucose into those resistant muscle cells.2,7

Brian L. Mealey, DDS, MS, is a professor and director of the graduate program in the Department of Periodontics at the University of Texas Health Science Center School of Dentistry at San Antonio. He has published more than 100 articles, abstracts, and textbook chapters in the scientific literature, with an emphasis on the relationships between oral and systemic health. 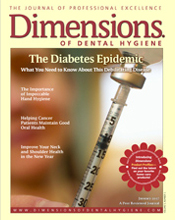