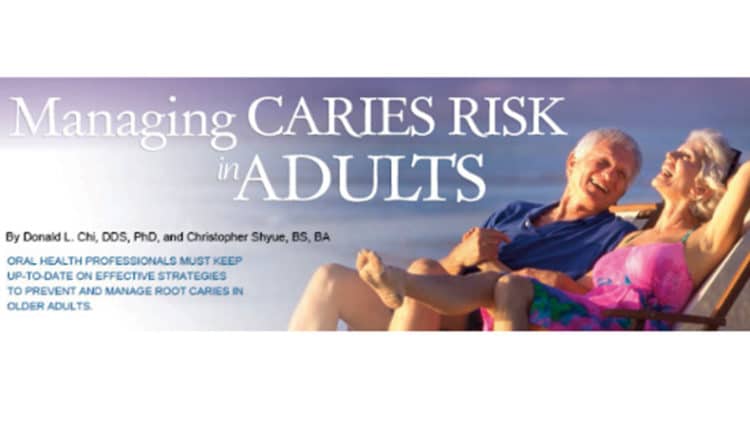 Adults in the United States are retaining their teeth longer than previous generations—mainly due to improvements in oral-­health-related behaviors. These include improved diet (eg, reduced intake of fermentable carbohydrates); use of oral hygiene products, such as fluoride toothpastes and other topical fluoride products; and improved access to dental care. Retaining healthy teeth helps individuals maintain chewing function, esthetic appearance, and quality of life. While these are positive outcomes associated with maintaining the natural dentition, long-term tooth retention is also associated with increased risk of root caries,1 which disproportionately affects middle-aged and older adults. Factors such as gingival recession, medication use, and xerostomia increase the risk of developing root caries. To address this important public health concern, oral health professionals must be aware of clinical strategies that can be used to prevent and appropriately manage root caries in adults.

Root caries is a dynamic disease process in which intraoral bacteria metabolize carbohydrates to create an acidic environment that leads to acid-mediated dissolution of tooth cementum and the underlying dentin. The process is initiated at the cementoenamel junction or on root surfaces, typically following apical recession of the gingival margin. Previous studies indicate increased risk for root caries among individuals with exposed root surfaces, gingival attachment loss, and deep pocket probing depths.2,3 Root caries can also develop subgingivally without gingival recession.

The bacterial organisms implicated in root caries include Streptococcus mutans, lactobacilli, and some species of Actinomyces (Figure 1).4 A recent study suggests that Lactobacillus casei (Figure 2), L. paracasei, L. rhamnosus, and Pseudoramibacter alactolyticus are also associated with root caries in older adults.5 These findings suggest that the microbiology of root caries differs from coronal caries.

Historically, the decayed and filled surfaces (DFS) index was used to measure root caries. In 1980, the root caries index (RCI) was introduced to address limitations associated with the DFS index, which does not account for the number of tooth surfaces at risk for caries.6 Despite noted limitations associated with the RCI, mainly in terms of implementing standardized methods to identify gingival recession, most root caries studies adopt this index. The RCI is expressed as a percentage and is calculated using a formula (Figure 3).

According to data from the third National Health and Nutrition Examination Survey 1999 to 2004, the prevalence of root caries among dentate adults between the ages of 50 and 64 was 30.8%, compared to 10.4% among adults ages 20 to 34.7 While the overall root caries experience among dentate adults age 65 and older decreased to 36% in 1999 to 2004, from 46% in 1988 to 1994, the high prevalence of root caries among middle-aged and older adults in the US is a major public health problem.7

In a survey conducted by Beck et al1, the authors found that among 520 noninstitutionalized, dentate adults age 65 and older living in Iowa, 63% had root caries. About 25% of these individuals had untreated root caries, and the percentage of subjects with untreated root lesions increased with age.1 These findings are similar to those presented in another study involving community-dwelling adults age 70 and older in six New England states.8 In a more recent study of urban community-dwelling adults age 65 and older who regularly accessed professional dental care, 76% had root caries.9 In contrast, my colleagues and I10 reported a root caries prevalence of 19.6% among adults age 45 and older recruited from dental practices affiliated with a practice-based research network.

Incidence is a measure of new disease that develops over a specific time period. Hand et al11 reported that root caries occurred at an annualized rate of 1.8 surfaces per 100 susceptible surfaces in a population of dentate Iowans age 65 and older. The incidence of root caries increased proportionately to age, despite the presence of fewer teeth among older adults.11 The annualized root caries incidence was 0.15 surfaces per person among working adults and their spouses (between the ages of 20 and 65) residing in fluoride-deficient communities on Long Island, New York.12 Most root caries studies report that the rate of recurrent root caries is 4% to 10%, with the majority of root caries occurring as primary lesions.1,8,11,13 These findings underscore the importance of identifying the risk factors for root caries and implementing disease prevention and management strategies aimed at modifying these risk factors.

Studies indicate the three most common risk factors for root caries in adults are increased gingival recession, exposed roots, and age. However, root caries is a complex multifactorial disease. As such, a number of additional demographic, intraoral, and behavioral factors may increase an individual’s risk for developing root caries. Some of these factors are immutable, whereas others are modifiable.

Despite perceptions that men are at greater risk for root caries than women, research on the topic is inconsistent. Five studies1,9,13–15 report that root caries affects a higher proportion of men than women, and three studies8,10,11 indicate no significant relationship. There are two possible explanations for these inconsistencies: gender is a proxy for oral health behaviors that may be similar or different for men and women, depending on the underlying characteristics of the study population, or other factors, such as financial hardship and insurance status, may modify the effects of gender on root caries risk.16 As with gender, there are inconsistencies in the literature regarding the relationship between race/ethnicity and root caries.3,13 It is consistently found in the literature, however, that blacks are more likely to have untreated root caries than whites.3,7,14

Gingival recession and exposed root surfaces are the main intraoral risk factors for root caries. Self-reported xerostomia is another risk factor.10 Chronic medication use and radiation therapy to salivary glands are common causes of xerostomia. There are two potential mechanisms linking xerostomia and root caries: reduced intraoral buffering capacity from lowered salivary flow or changes in the composition of saliva, or the use of compensatory behaviors, including intake of sugary beverages or candies, to alleviate symptoms associated with xerostomia. Another intraoral risk factor is the use of a partial denture,3 which is associated with plaque accumulation and gingival recession on abutment teeth.

Studies indicate that poor oral hygiene and resultant plaque accumulation, frequent snacking and intake of sugary foods and beverages, and sporadic dental care (a measure of poor access to preventive dental care services) are associated with increased risk for root caries in adults.8,10,13,17 Another behavioral risk factor is tobacco use.13,18 Smoking is associated with periodontal diseases (and gingival recession), and chewing tobacco contains fermentable carbohydrates.

The high prevalence and incidence of root caries in middle-aged and older adults reinforce the importance of strategies to prevent root caries. At the patient level, dental health professionals must emphasize optimal oral health behaviors. All patients should be encouraged to reduce their intake of simple sugars and fermentable carbohydrates. In addition, the importance of twice-daily toothbrushing with fluoride dentifrice and regular dental visits should be encouraged. High-risk patients may benefit from twice-daily toothbrushing with high-fluoride (eg, 5,000 ppm) prescription toothpastes.19 High-risk patients may also benefit from annual application of 38% diammine silver fluoride—a clear liquid medicament that is not currently available in the US.20 Investigators are working on obtaining proper US Food and Drug Administration approvals to bring diammine silver fluoride to the US for clinical use. Three monthly applications of 22,500 ppm sodium fluoride varnish is another preventive strategy that may be appropriate for high-risk patients.21 In addition, xylitol lozenges (1 g doses taken five times a day for a total daily intake of 5 g), and three monthly applications of chlorhexidine-thymol varnish and 40% chlorhexidine varnish have been shown to prevent root caries.22–24 At this time, neither chlorhexidine thymol nor chlorhexidine varnish is available in the US. Chlorhexidine mouthrinses (0.12%) may also help to prevent root caries by reducing the number of intraoral bacteria. On a population level, community water fluoridation also helps to prevent root caries in adults.

Oral health professionals should adopt a sensible treatment planning approach. Caries root lesions should be restored only when required, taking into consideration the patient’s age, health status, and symptoms associated with root caries. Before teeth are restored, root caries must be controlled using the preventive approaches previously mentioned. Aggressive chemo­therapeutic management of root caries may reduce the need for invasive restorations.26

Root caries is a serious public health concern that requires the attention of oral health professionals. The first step in addressing root caries is to identify patients and populations at greatest risk. The main risk factors for root caries are older age, gingival recession, and exposed root surfaces. Other important risk factors include medication- or radiation-induced xerostomia and oral health behaviors, such as poor oral hygiene, frequent snacking and intake of sugary foods and beverages, infrequent visits to the dentist, and tobacco use.

Patient-level preventive strategies must address behavioral risk factors and include various chemotherapeutic approaches, such as prescription fluoride toothpastes, diammine silver fluoride, xylitol lozenges, and chlorhexidine. A population-level preventive approach is promotion of community water fluoridation. When dental restorations are necessary, root caries should be restored using minimally invasive techniques, such as IRT. A comprehensive patient-centered approach that focuses on risk factor identification, prevention, and minimal intervention will help to reduce root caries and improve the oral health of vulnerable adults.

Christopher Shyue, BS, BA, is a research assistant in the UW School of Dentistry's Department of Oral Health Sciences.

The ABCs of Sealants

Is It Possible to Reduce Whitening-Related Tooth Sensitivity? 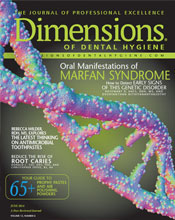