The incidence of preterm and/or low birth weight (PLBW) infants is a rising international concern. Out of 500,000 babies born annually in the United States alone, approximately one in 10 births are considered preterm and/or low birth weight.1 Pregnant women with periodontal disease have more than seven times the risk of delivering PLBW infants.2,3

An oral health assessment needs to become a regular part of prenatal care. The micro-organisms associated with gingivitis and periodontal diseases, like Porphyromonas gingivalis, are related to PLBW.4 Risk factors for PLBW include: tobacco use, poor nutritional status, physical or psychological stress, and a history of premature deliveries.5 Exposure during pregnancy to prostaglandins and bacteria may induce fetal stress in utero contributing to developmental difficulties.5

Bacteremias can occur on a daily basis in those with periodontal infections through simple activities such as tooth brushing and chewing, which trigger an inflammatory process. Periodontal diseases are gram negative anaerobic infections that can lead to bacteremias within the body. Exposure to P. gingivalis increases prostaglandin levels and leads to an approximate 17% decrease in fetal weights.5

Prostaglandins, which are found in high levels in women with periodontal diseases, are the main chemical cytokine capable of inducing labor by causing uterine contractions.5 Prostaglandins are a group of naturally occurring, unsaturated fatty acids that affect the action of certain hormones. As prostaglandin levels rise, myometrial contractility can occur, which can induce labor.6 Studies show that a prostaglandin synthesis inhibitor administered to pregnant women can significantly prolong gestation, reduce uterine contractions, and lengthen duration of labor.7

A human case-control study done in 1996 found an association between mothers with severe periodontitis and PLBW infants. The women with a low risk of developing periodontal disease more often delivered full term than those mothers who presented with severe disease.8

A longitudinal study was conducted in a prenatal care clinic in Santiago, Chile, between April 1998 and December 2000. The study was limited to pregnant woman with low socioeconomic status. Each participant received prenatal care consisting of nutritional counseling, stress reduction, routine screenings, and education on risk factors for preterm labor. Women between the ages of 18-35 prior to 21 weeks gestation were included. Excluded in the study were any women presenting with less than 17 teeth, with diabetes, and/or who required antibiotic premedication prior to invasive procedures. Each study participant was examined using the same evaluation method to assess her periodontal status. Each had to clinically reveal site specific areas of four or more teeth with 4 mm pocket depth or greater. This also included attachment loss of 3 mm or greater.9 A total group of 639 women completed the study with 406 noted as periodontally healthy and 233 who presented with active periodontitis. A subset of the healthy group who presented with gingivitis received supragingival and subgingival scaling, home care instruction, and a chlorhexidine solution mouthrinse (0.12%) one time a day with maintenance every 2-3 weeks. The group of 233 women with active periodontitis received no treatment during pregnancy. In the group of periodontally healthy subjects, the incidence of PLBW was low (2.5%). The incidence of preterm birth only was 2.8% and low birth weight only was 1.9%. The group with active periodontitis revealed a higher percentage of PLBW. Both preterm and low birth weight were experienced by 8.6% of the women with periodontitis; 3.5% of the women with periodontitis experienced preterm birth only; and 3.4% of the women with periodontitis experienced low birth weight only. The study concluded that an association existed between periodontitis and PLBW and that periodontal therapy reduced this risk.9

In Hungary, 8.2% of live births are preterm low birth weight.10 A cross sectional study was conducted by the Hungarian National Health Service that involved 85 pregnant women. Any participants with known diseases, such as diabetes and heart conditions and/or the need for antibiotic premedication prior to invasive procedures, were excluded. Site specific areas were evaluated for more than 50% of the dentition involving greater than 4 mm pocket depths. Socioeconomic levels were assessed via education levels of both parents through questionnaires. This revealed a slight association between periodontitis and PLBW based on socioeconomic status. The result of the study indicated that the numbers between the case and control group were almost equal indicating a p-value of 0.001.10

Lastly, McGaw used data from a number of studies that tested pregnant hamsters. The hamsters with higher levels of prostaglandins (PGE2) and P. gingivalis, which is a gram negative periodontal pathogen, resulted in lower fetal weights.2

IMPORTANT INFO FOR YOUR PATIENTS

Preventive dental treatment, including a dental examination and prophylaxis at least twice a year, can have a significant influence on overall periodontal health. Gingivitis can be reversed with a simple prophylaxis and proper self-care instruction.

Women need to be aware of the complications that can occur during pregnancy. Demonstration of proper brushing and flossing techniques is vital to helping patients maintain overall health. This instruction should be individualized to fit the specific needs of the patient.

Women often avoid all dental treatment during pregnancy because of the misconception that it will endanger the fetus. Avoiding routine prophylaxis in the first trimester may be best because of the increased risk of bacteria causing harm to the developing embryo.11 However, since the simple act of chewing can cause a bacteremia in a patient with periodontal infection, each case should be treated appropriately. The second trimester is ideal for routine prophylaxis. The third trimester is often avoided due to discomfort while sitting in the dental chair for an extended period of time.

Pregnant women need to keep in mind that they have an increased risk of developing gingivitis during pregnancy due to the elevated levels of the hormones; estrogen and progesterone and routine care is important in treating/reversing this condition as well as in preventing the advancement into periodontitis. Women with periodontitis who receive scaling and/or root planing may reduce their risk of PLBW infants by 85%.12

Education is a large part of prevention. Dental hygienists play the lead role in the education process. Women of childbearing age need to understand the importance of good oral health and its effect on a developing fetus. The myth of dental care being dangerous during pregnancy needs to be dispelled. Patients should be aware of proper methods of self-care to decrease the inflammation process that can affect the pregnant patient and the fetus, including appropriate recare appointments, supragingival and subgingival removal of biofilm by scaling and root debridement, tooth brushing, interdental devices, and chemotherapeutics.

Cindy Schroeder-Drucks, MA, RDH, CDA, is an assistant professor at the University of Medicine and Dentistry of New Jersey–School of Health Related Professions (UMDNJ-SHRP), Newark, in the Department of Allied Dental Education. A practicing dental hygienist for the past 13 years, Schroeder-Drucks has been teaching at the university since 1998. She is also the academic advisor to the baccalaureate program at UMDNJ-SHRP.

Are Your Waterlines Safe?

The Particulars of Piezo 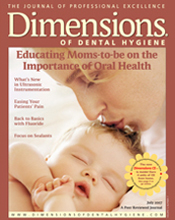