New legislation paves the way for improving access to care in this state through the introduction of a new provider model.

Over the past few years, talk of a “new” dental workforce provider—the dental therapist—has been widespread. In reality, these providers are not new. Dental therapists have been practicing in countries other than the United States since 1921, and they are now successfully employed in more than 50 countries, including the US.1 The documented access-to-oral-health-care crisis is clearly visible in this country and, unfortunately, trends in Vermont reflect this. In 2012, approximately one out of every six Vermonters went without dental care. This population is composed mostly of children covered by Medicaid, older adults, and low-income families.2 In 2013, the Vermont Department of Health3 reported:

As the Institute of Medicine report “Improving Access to Oral Health Care for Vulnerable and Underserved Populations” explains, the current dental delivery system is broken and states should explore all avenues to expand access to care, including amending state practice laws to enable new providers.4

HISTORY OF THE LEGISLATION TO INTRODUCE THE DENTAL THERAPIST IN VERMONT

In 2010, the nonprofit organization Voices for Vermont’s Children was given grant assistance and guidance by the Kellogg Foundation with the goal of increasing access to oral health care in the state. One of the Kellogg Foundation’s proposed solutions was the creation and implementation of a dental therapy provider. Within months of receiving the grant, a coalition of more than 40 diverse groups—the Vermont Oral Health Care for All Coalition—came together to support the proposed dental workforce provider. The Vermont State Dental Society chose to actively
oppose it.

In 2011, with support from Vermont House leaders, the first dental therapist bill (House Bill 398) was introduced. From 2011 through 2015, the legislation underwent several changes, moved to the Senate (Senate Bill 20), acquired more support, and was heard several times by multiple committees. Eventually, in April 2015, the legislation (S. 20) passed the Senate by an 18-8 vote. Along the way, local and national media coverage further exposed the access-to-oral health-care crisis, and interest in the dental therapist provider model in particular increased. Additionally, the Vermont Oral Health Care for All Coalition was able to recruit several Vermont dentists who were willing to testify in favor of the proposed workforce provider. These supporters made a world of difference as the process moved forward.

Another important aspect of the Vermont legislation was that the provider be able to work in rural and community settings without the direct oversight of a dentist. This means that the dental therapist must work under general supervision. Without this important caveat, access to much needed dental care for Vermonters would not have been improved. Although general supervision was written in legislation from the beginning, in 2015, some Senate committee members hearing testimony indicated they would be more comfortable passing the legislation if the provider worked only under direct supervision. In order to get a favorable vote from this particular committee, the coalition chose to agree to this request. The goal was to change the wording back to general supervision further down the road and, due to strong support from the sponsors of the bill, this goal was achieved. By the time legislation went for a final vote in the Senate, the provider was back to the originally suggested model of a dental hygiene-based dental therapist working under general supervision, where it remained.

The Vermont legislative session runs from January through April. As has been the case since 2010, the summer and fall months of each year are used to network and prepare for the upcoming legislative session, and last year was no exception. Because S. 20 passed the Vermont Senate in 2015, the House Committee on Human Services took up the bill in January 2016. Three days of testimony were completed before S. 20 was tabled due to other bills needing immediate action. Hearings on S. 20 resumed in mid-March. After a favorable vote in Human Services, the bill moved to the House Committee on Government Operations, where it was approved and finally moved to the House Committee of Ways and Means where it was passed again. After hearing testimony, both of those committees voted in favor of S. 20, clearing the way for a final vote on the House floor. It was an exciting day when the House voted 109-32 in favor of legislation to create a new dental workforce provider in Vermont: the dental therapist. The bill is expected to be signed into law by Governor Peter Shumlin.

Faculty members from the Department of Dental Hygiene at Vermont Technical College (VTC) in Williston created a dental therapist curriculum that exceeds the Commission on Dental Accreditation’s recently implemented Accreditation Standards for Dental Therapy Education.5 The program will be housed at VTC and implemented by dentists and dental hygiene faculty in the school’s state-of-the-art clinic and classrooms. When the first class of dental therapists begin practicing under general supervision, they will have as much or more clinical experience providing restorative care as dental school graduates.

It’s time for a change in the way Vermonters—and the nation—perceive oral health. Evidence shows that dental therapists are an effective and safe way to provide dental care to people in rural communities, children covered by Medicaid, and low-income populations.6-10 With increased access to oral health care for all and a “new” provider based on prevention with direct-access capabilities, we will be taking another step in the right direction.

Sheila Bannister, RDH, MEd, is an associate professor in the Department of Dental Hygiene at Vermont Technical College in Williston and is a member of the college's Dental Hygiene Advisory Board. She has twice served as president of the Vermont Dental Hygienists' Association and is the current legislative chairperson. Bannister's passion is increasing access to oral health care in Vermont. To support this interest, she has organized free dental care events and continues to work on legislation to expand the dental workforce in order to increase access to care. 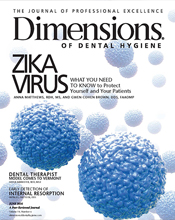