As the dental hygienist’s role has grown in esthetic dentistry, understanding vital tooth whitening is essential.

Our culture’s increasing association of physical attractiveness with overall well-being has made a significant impact on dentistry. The patient’s desire for an esthetic appearance, which is often equated with success and positive self-esteem, plays a major role in seeking an attractive smile.1,2 These factors have created an increase in patients seeking dental treatment for a whiter smile and improved esthetics. Tooth whitening is the most conservative treatment for discolored teeth—offering a simple and economical approach to changing their color.3 This has expanded the role of the dentist and dental hygienist in the provision of esthetic dentistry.

The technique of vital tooth whitening in dentistry was created over a century ago, with the use of hypochloric acid to treat fluorosis and heated cotton with hydrogen peroxide and ethyl ether to treat mottled enamel. In 1968, the use of 10% carbamide peroxide in a product dispensed to patients to improve their gingival health whitened teeth as well. For many years, carbamide peroxide was used as an oral antiseptic before it was applied as a gel for home bleaching. The first whitening product was commercially available in 1989 and contained a thickening agent, carbopol, that was used in vacuum-formed custom trays. The viscosity of the solution allowed for increased retention in the tray and longer bleaching time. This technique became known as night-guard vital tooth bleaching, and is still commonly used.4

The success of the whitening procedure depends on the dental professional’s correct diagnosis of the etiology, type, and intensity of the tooth discoloration. Candidates for whitening procedures are patients with extrinsic tooth staining that affects only the enamel surface. This type of staining is associated with chromogenic food such as blueberries, beverages such as tea or red wine, tobacco use, and discoloration associated with aging. The more difficult stains to treat are intrinsic tooth discolorations that affect the enamel and dentin, which are most often caused by fluorosis or tetracycline use.6

Currently, four fundamental tooth-whitening systems are in use: in-office or power bleaching, dentist-supervised home bleaching with trays, a combination of both, or over-the-counter bleaching products. There are hundreds of competing products and delivery systems, all of which employ the same principles of exposing the discolored teeth to hydrogen/carbamide peroxide over a period of time.7

In-office or power bleaching systems generally use high levels of whitening agents consisting of 15-40% hydrogen peroxide. The treatment is usually more costly than the take home systems because of chair time, application of gingival dam or gingival paint-on barrier products, and monitoring of patients by dental professionals. Best suited for patients who desire quick results, in-office systems do not require patient compliance and offer immediate, visible results. The in-office approach is also recommended for patients in need of close monitoring due to clinical conditions such as extensive gingival recession, deep unrestored abfraction lesions, and single tooth endodontic discoloration.

Some in-office whitening systems recommend the use of light or heat activation of the hydrogen/carbamide peroxide gel. The introduction of light activated devices such as plasma arc, light emitting diodes (LED), argon lasers, metal halide, and xenon-halogen lights have created a public awareness and request for this mode of tooth whitening.3 Several articles evaluated the efficacy of light-activated bleaching agents. Some reported positive results on the efficacy of light or heat to accelerate hydrogen peroxide breakdown8 while other studies discredited the findings.9

The use of the light may cause minor to marked photosensitivity and hyperpigmentation in patients taking acne medications, anticancer drugs, antidepressants, antiparasitics, antipsychotics, diuretics, hypoglycemics, and nonsteroidal anti-inflammatory drugs. Since all manufacturers of in-office systems recommend that patients also use take-home trays, there is a question as to which whitening procedure contributes the most to the end result.10 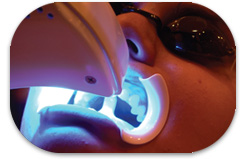 The dental professional-supervised night guard or at-home bleaching method typically uses a low concentration of whitening agent applied to the teeth via a custom-fabricated mouthguard worn at night or during the day for at least 2 weeks using 10%-30% carbamide peroxide gel or 2%-10% hydrogen peroxide concentration. The advantages of this method are the lower cost to patients and the fact that it has the most scientific evidence supporting its effectiveness. The major disadvantage is that it requires patient compliance to obtain maximum results. Patients select day or night application of the whitening product, which determines the appropriate type and concentration of material. The day method calls for one to two daily treatment from 30 minutes to 2 hours per day for 2 to 6 weeks, while at night, trays are inserted at bed time and should be left in place for a minimum of 2 hours. Some of the products are formulated with potassium nitrate and/or fluoride to reduce tooth sensitivity.

Over-the-counter products usually contain low levels of whitening agent (3%-6.5% hydrogen peroxide), which are self-applied to the teeth via strips, paint-on products, or kits with preformed or semimolded trays. These products are a good option for people who cannot afford the professionally prescribed whitening methods, do not have time for office visits, or to maintain already whitened teeth.11 They usually require one to two 30 minute applications for up to 2 weeks. Since the contact time is reduced compared with professionally prescribed whitening gels, the applications must be used longer to obtain similar results. Also, due to the ease of availability, they can be used indiscriminately by patients, and long-term risks have not yet been determined.12 Toothpastes advertised as whitening products usually contain a mild abrasive to remove surface stain and contain a minimal amount of peroxide. In North America, these products account for sales of nearly 1 billion dollars a year.13

Potassium nitrate is used to reduce tooth hypersensitivity by preventing nerve repolarization after initial depolarization and by reducing pulpal sensory nerve activity. Potassium nitrate gels can be used in the custom bleaching trays to reduce root hypersensitivity. Many products contain water to decrease the dehydration effects of whitening or the addition of amorphous calcium phosphate to treat hypersensitivity.11 The use of fluoride in pastes, gels, or varnishes have also been used to reduce tooth sensitivity by occluding dentinal tubules with fluoride precipitates.

The use of a 5% concentration of potassium nitrate and fluoride can minimize tooth sensitivity. The toothpaste should be used 2 weeks before whitening and during whitening treatment as an adjunct therapy for sensitivity management.14

The most important factors in the efficacy of any bleaching treatment are the concentration of the bleaching product and duration of exposure time by patient.8 All systems employ the basic principles of exposing the discolored dentition to various forms of hydrogen peroxide over time.

In a survey conducted by Clinical Research Associates, 91% of 8,143 dentists stated that they had used vital tooth bleaching with 79% reporting success and 12% reporting that they were not satisfied with the concept. It is the role of the dental professional to educate patients on the choices available for tooth whitening and to provide them with the best treatment options. Dental professionals need to educate themselves in order to effectively inform their patients of the benefits and risks of the different options for whitening based on scientific evidence.6

Eva M. Lupovici, RDH, MS, is a clinical professor in the Department of Allied Health at New York University College of Dentistry. A dental hygiene educator for 32 years and a practicing clinician for more than 3 decades, Lupovici is also a contributing author to the second edition of Comprehensive Periodontics for the Dental Hygienist published by Prentice Hall.

Your First Line of Defense 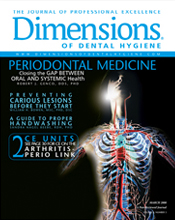