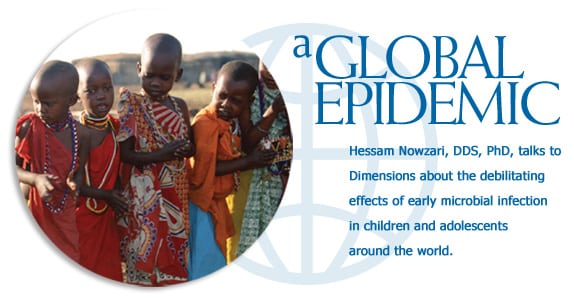 Hessam Nowzari, DDS, PhD, talks to Dimensions about the debilitating effects of early microbial infection in children and adolescents around the world.

A. An increasing amount of evidence substantiates the negative impact of A. actinomycetemcomitans, P. gingivalis, T. forsythia, and other periodontal pathogenic microorganisms on the smiles of children and young adults around the world.1-3 The protrusion of maxillary incisors following periodontal attachment loss, extensive destruction of anterior papilla, and loss of maxillary central incisors are possible effects of early oral microbial infection. They all cause serious damage to the facial expression, which can have a significant psychological and emotional impact on young patients.

Oral Health America (OHA) is a fully-independent nonprofit organization, supported through contributions from individuals who believe that oral health should be recognized as one of the lifetime factors critical to overall health. OHA is the founder and director of Smiles Across America (SAA), the first nationwide campaign to coordinate schools, governments, care providers, and corporate and community partners in the fight against tooth decay. SAA incorporates disease prevention and health promotion services and community organizing to create sustainable, successful models for school-based or school-linked care.

Q. Why is early oral microbial infection so prevalent in these areas?

A. These regions simply have high rates of infection in general. Genetic predisposition or immune problems make up a small percentage of those with the disease but the main reason relates to simple infection. The numbers are also under-reported as the data are frequently provided by governmental organizations that do not want to accurately report the actual numbers.

In some countries, these micro-organisms go from one generation to another, which is called vertical transmission. If these microorganisms were stopped in the first generation, then the second and third generations would be safe.

In Mozambique, Angola, Tanzania, and Kenya, the numbers of those infected with these micro-organisms are truly striking. Early oral microbial infection is so prevalent that people can be diagnosed just by looking at them because their front teeth are protruding and their gums are red and severely inflamed. In the United States, the prevalence of early onset periodontitis is less than 1% in 14-17 year olds and 3.6% in young adults age 18-34. However, the numbers are much higher in minorities and in certain regions of the country such as East Los Angeles, South Central Los Angeles, and parts of Atlanta, South Carolina, Texas, and Arizona. Periodontal health disparities are socially significant in the United States.

Q. What is the psychological or emotional impact of this disease?

A To date, little attention has been given to the psychological and emotional impact of this epidemic. How do affected adolescents handle the social difficulties associated with their facial appearance? Not only is their appearance altered, but their speech may become problematic as well. Facial impressions play an important role in human interactions. The smile has a significant impact on impression formation and can dictate the way children or adolescents relate to each other. Expectations and opportunities can be affected. The permanent loss of maxillary incisors can result in conduct problems at home, learning problems at school, and social inhibition. Early oral microbial infection and loss of papilla can lead to isolation. Children may become depressed. The psycho-educational development and social perception by teachers and parents are at risk in school-aged children.

Creating a Plan of Action

Q.What can dental professionals do to help more of these children?

A. Here is a framework for action. First, we need partnership among countries. The partnership will help identify the true numbers of incidence. Children will benefit from an international effort to improve the quality of their lives. This should include public education on the significance of prevention and early diagnosis.

The transmission of the oral microbial infection is often from mother to child. This means our intervention needs to begin prior to birth. All pregnant women should be informed about how easily transmission can happen. For example, pregnant women should be warned against kissing the child on the lips, sharing eating utensils with the child, sharing toothbrushes, and chewing the child’s food for him or her, and they must seek treatment if they are diagnosed with an oral microbial infection. If transmission is stopped within a certain time period, the mouth will be colonized by protective micro-organisms, which will then prevent the colonization of the mouth by pathogens. Simple periodontal education can be added to the list of what pregnant women are learning before they give birth. Traditionally, mothers are the best patients when it comes to communication and the safety of their children.

Parents need to be educated on brushing primary teeth and general oral hygiene as early as possible. Once the disease is detectable from a clinical point of view, the war is lost. The disease happens when the microbes have infected the oral cavity, not when there is bone and attachment loss. In pediatric patients, pathogens reside in the micro-environments, such as the tongue and floor of the mouth. Saliva can be the vehicle for bacterial transmission from parents to children and among family members.

The prevention effort also needs to be targeted. Ethnic origin and geographical factors influence the distribution of these pathogens. For example, p. gingivalis is more prevalent in juvenile patients in Chile, while T. forsythia, T. denticola, and p. gingivalis seem to be more dominant in Japan. In Korea, F. bacterium, M. micros, and p. gingivalis are the most often detected. 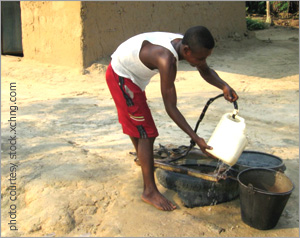 A. In many parts of the world, the major cause of contamination is drinking water and food. This is why partnership is so important.

Q. Should full mouth periodontal probing be performed on children with mixed dentition?

A. By including an early periodontal examination as part of a medical examination, patients can be referred to dental professionals for care. This is becoming more and more important because a significant number of young patients who undergo transplant operations are at risk of transplant failure because of periodontal problems.7 Physicians are often unaware of the link between early oral microbial infection and failed transplants. They need to be educated.

Q. How should pediatric patients with periodontal diseases be treated?

A. Extraction of severely affected primary teeth is a good decision. Administration of locally delivered antimicrobials and systemic antibiotics via irrigation or Q-tip may be indicated. Frequent professional care to stabilize the periodontal condition and eliminate the pathogens is a must. The emphasis needs to be on preventing disease progression into the erupting permanent dentition. Permanent teeth need to erupt in a healthy environment.

Local antiseptics continue to be an important part of periodontal therapy. Once pathogens are reduced to levels compatible with health, then monitoring and controlling the recolonization are necessary to prevent recurrence of the disease.

Dental hygienists are becoming microbiologists and virologists. There is no doubt that the future of dental hygiene is bright and that the curriculum of dental hygiene will change drastically. Dental hygienists will monitor patients from a microbial and viral point of view. They will have a significant role in educating patients. When they see a patient affected by this disease, they have to treat the entire family and the community at large because of vertical and horizontal transmission.

Hessam Nowzari, DDS, PhD, is chairman of the University of Southern California’s Advanced Periodontics Department and a Diplomate of the American Board of Periodontology. He expertise is in implantology, periodontal therapy, and full-mouth reconstruction. He is the founder of the Taipei Academy of Reconstructive Dentistry in Taiwan and one of only two American members of the Dniepropetrovsk State Academy of Medical Sciences in Ukraine.

A New Tool in the Caries Armamentarium 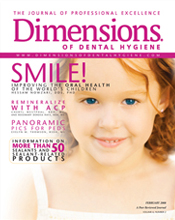