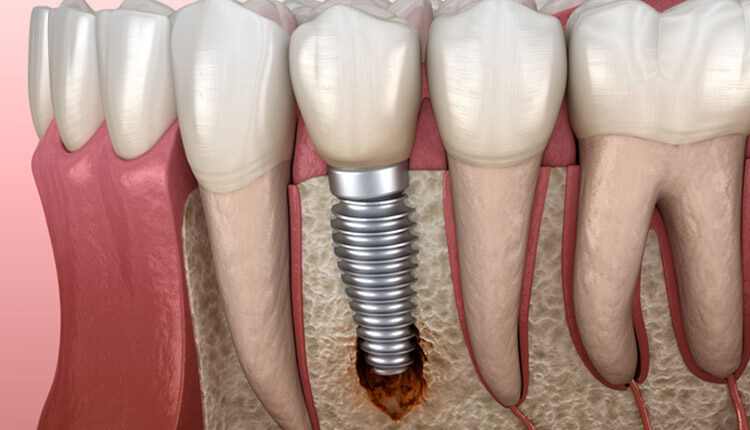 While implant therapy is well-known for its safety and efficacy, not all implants flourish. Whatever the cause, peri-implantitis is a serious threat to implant health and clinicians must be prepared to adequately address the signs and symptoms of peri-implantitis and return the site back to health. This Perio Update provides insight into treatment strategies for this serious complication.

Although the most effective approach to treating peri-implantitis has not been established, based on the clinician’s judgment, surgery may be appropriate in cases of progressive bone loss. Before deciding on the surgical option, data should be gathered, including probing depths, presence or absence of keratinized gingiva, type of prosthesis, right-angle periapical radiographs, history of periodontitis, and dental and medical history. In most cases, a cone-beam computed tomogram is valuable. From these data it is possible to determine if the patient is an appropriate candidate for surgery. It will also allow clinicians to determine the approximate percentage of bone in contact with the implant, identify what portion of the rough surface of the implant is suprabony, gain an estimation of the number of bony walls remaining, and determine the need for additional keratinized gingiva.

In most cases, implants with less than 50% remaining bone contact are best removed, and the extraction site grafted and retreated, as indicated. Cases in which implants have adequate remaining supporting bone and where part of the rough surface of the implant is suprabony (eg, exposed threads) often respond well to the removal of the rough suprabony surface (and any screw threads). This is termed implantoplasty (Figure 1, Figure 2, and Figure 3).1

Various sizes and shapes of 12-fluted finishing burs, followed by the use of appropriate polishing burs, can help remove the rough surface and polish the implant. The soft tissue is placed at an apical position that approximates the bone height. While this has been shown to be successful in some cases, it presents the disadvantages of recession of the peri-implant soft tissues, with more of the implant body exposed—as well as the probability of depositing titanium particles within the surrounding soft tissues. This approach is rarely suggested in areas considered esthetic by the patient. Where bony walls remain, attempts can be made to regenerate bone. Histologic reattachment of bone has been shown in animal studies and been claimed in two human cases.2,3 Once again, there are two general approaches to treating the implant surface when bony reattachment is attempted.

As with peri-implant mucositis, controversy exists on how to appropriately treat peri-implantitis. One camp believes aggressive removal of the biofilm and recontouring the implant surface is most effective.4 Others have demonstrated a less aggressive approach can achieve similar results.5–8 Bony reattachment (ie, reosseointegration) seems to depend on the ability of the titanium oxide (TiO) layer to reconstitute once removed. It has been shown in order for bone to attach to the surface of a titanium implant, the surface must be covered by a thin layer of this oxide.9 If one of the goals of treatment is to allow reattachment of bone to the surface, the presence of the TiO layer appears to be important; thus, attempts should be made to avoid further removal of this layer during therapy. That said, this thin layer is easily removed and will not always reestablish itself. If the clinician is confident this layer will reform or feels its reformation is not critical, aggressive removal of the TiO layer should not negatively affect outcomes.

If, on the other hand, the clinician is concerned about the probability of reformation, every effort should be made to preserve the TiO layer. This approach is facilitated by utilizing saline-soaked pellets to reduce implant-bone biofilm,10 as well as use of the dental videoscope—which increases visibility and decreases the probability of damaging the remnants of the oxide layer.

In most cases with remaining bony walls, once the implant surface has been cleaned, a hard tissue graft is placed. Various materials have been suggested. Many clinicians use human freeze-dried bone (70% mineralized cortical bone, with 30% demineralized bone matrix) mixed with enamel matrix derivative and covered with a long-acting collagen membrane. Polytetrafluoroethylene sutures are often used and left in place for 30 days. Systemic antibiotics (eg, amoxicillin 500 mg for use three times per day, starting the day before surgery and continued for 7 days) and chlorhexidine rinses (used twice daily for 30 days starting the day after surgery) are prescribed. Follow-ups are scheduled as determined by the response of the tissues and cooperation of the patient.

Routine maintenance to reduce the biofilm burden on implants and maintain periodontal health around natural teeth is critical to preventing implant failure. Routine professional appointments and at-home maintenance allow clinicians to identify early stages of peri-implant disease and intercede in an appropriate manner. Surgical intervention in refractory cases of peri-implant mucositis may be needed and is often warranted around implants diagnoses with peri-implantitis.

THOMAS G. WILSON JR. received his DDS degree from the University of Tennessee School of Dentistry in 1971 and a Certificate in Periodontics from the University of Washington Graduate School of Dentistry in 1974. A periodontist practicing in Dallas, Wilson is a diplomate of the American Board of Periodontology and a member of the International College of Dentists. He is also a clinical associate professor at Texas A&M University Baylor College of Dentistry in Dallas and the University of Texas Health Science Center at San Antonio School of Dentistry. A prolific author and lecturer, Wilson is author of award-winning textbooks, including Dental Maintenance for Patients with Periodontal Diseases, ITI Dental Implants: Planning, Placement, Restoration, and Maintenance, and Periodontal Regeneration Enhanced. He is co-author of La riduzione dei tempi di trattamento, and an editor and contributor to Advances in Periodontics, Fundamentals of Periodontics, and Minimally Invasive Periodontal Therapy. Wilson previously served as editor in chief of Quintessence International and associate editor of the Journal of Periodontology. He is also a former member of the American Dental Association Council on Scientific Affairs.

Is a Universal COVID-19 Vaccine Feasible?