Soft Cloud Film’s first production, The Tooth Racket, will screen at the Rock the Shorts Film Festival on March 7, 2020, at the Downtown Independent in Los Angeles. 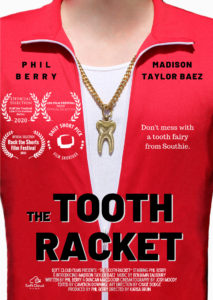 Soft Cloud Film’s first production, “The Tooth Racket,” will screen at the Rock the Shorts Film Festival on March 7, 2020, at the Downtown Independent in Los Angeles.

Directed by Karisa Bruin, starring Phil Berry and introducing Madison Taylor Baez (starring as Young Selena Quintanilla in the new Netflix project Selena, The Series), the short film is about a tooth fairy from Southie who has had enough of a little girl who keeps slipping fake teeth under her pillow. His mob boss will break him in two if he doesn’t get a real tooth this time. When the girl wakes up, the tooth fairy finds himself in a whole new ballgame, and he may just be out of his league. For more information, visit thetoothracket.com.

The film will also screen at the LDS Film Festival on February 26, 2020, at 3:30 p.m. in Lindon, Utah, at the Scera Center for the Arts and was featured in the 36th Annual KidFilm Family Festival in Dallas in January. “The Tooth Racket“ has been selected as the Film Shortage’s Daily Short Film Pick, and with over a thousand views on Vimeo, it is a fun, family-friendly comedy short film.

How Marijuana Accelerates Growth of HPV-related Head and Neck Cancer