The Role of Oral Health Professionals in the Opioid Epidemic

Clinicians need to understand the signs and symptoms of opioid abuse and engage in efforts to curtail it.

By Heather R. Thomas, RDH, BS, MEd and Priscilla A. Rost, RDH, BS, MEd On Feb 1, 2018 0
PURCHASE COURSE
This course was published in the February 2018 issue and expires February 2021. The authors have no commercial conflicts of interest to disclose. This 2 credit hour self-study activity is electronically mediated.

In 2015, deaths from drug overdose in the United States soared to an all-time high, with the majority involving opioids.1 Despite increasing awareness about the dangers of opioid use, the death toll continued to spike through 2016, with preliminary data estimating more than 64,000 deaths attributed to drug overdose.2 Of those 64,000, roughly 14,400 were attributed to opioid pain killers; 20,145 involved synthetic opioids (excluding methadone), and 15,446 were caused by heroin.2 According to the US Centers for Disease Control and Prevention (CDC), this equates to 91 Americans dying daily from an opioid overdose, quadrupling the number since 2003.1,3,4 The immense breadth of this epidemic has policy makers and health care providers striving toward tangible solutions.5

An increase in the use of legally prescribed opioid pain medications has significantly contributed to the overdose epidemic. Today, the number of opioid prescriptions written in the US is four times higher than in 1999.6 While many people use opiates legally to control chronic pain, the risk of addictions is high.6 Because opiates stimulate the release of dopamine in the brain,7 respiratory suppression may occur, which can cause death.8Unintentional overdose may occur because patients may develop a higher tolerance to the analgesic, or pain-relieving, properties than to the respiratory depressant properties, so a dosage high enough to address pain may exceed the patient’s tolerance to respiratory depression, resulting in respiratory arrest.9 The same mechanisms that make the drug an effective pain management tool are also most dangerous when methods are used to increase their onset, such as snorting or injecting.6 Current evidence suggests that the recent spike in heroin use may be due to the mounting chemical tolerance of prescribed opioids, causing users to switch to heroin, which is often less expensive and, in some cases, easier to obtain.6 Prescriptions alone are not to blame, however, as the etiology of the epidemic is multifactorial, including greater social acceptance of recreational drug use and widespread pharmaceutical marketing.6 Health care professionals need to be knowledgeable in their understanding of opioid abuse and proactive in patient and pain management.

Several online drug screening tools are available to help practitioners identify high-risk patients. The National Institute on Drug Abuse website—drugabuse.com—has links to several screening resources.10 Medical practitioners can register with their state’s Prescription Drug Monitoring Program (PDMP), an electronic database that tracks controlled substances and provides data on medications, high dosages, and prescriptions from other providers.11,12 In many states, PDMPs can be accessed by an individual designated by the prescriber, such as a dental hygienist.13 The CDC recommends checking the PDMP before every opioid prescription and rechecking every 3 months.12 Individuals at high risk for opioid overdose include those who: already have an opioid dependence or reduced tolerance; inject opioids; use prescription opioids; take opioids in combination with other sedating substances; use opioids and have medical conditions, such as depression, human im­munodeficiency virus infection, or liver or lung disease; and have household members who possess opioids.8

Closely monitoring of at-risk patients’ oral conditions and educating them about the po­tential dangers of opioid use can help patients prevent unintentional opioid abuse.13 For pa­tients with a known opioid addiction, it is important to have resources available to assist with addiction awareness, withdrawal symptoms, and treatment options.

Signs of an opioid overdose include pinpoint pupils, unconsciousness, and respiratory depression.8 In the event of an opioid overdose, basic life support and administration of naloxone, the opioid antagonist, can prevent death. Naloxone is effective in multiple delivery routes including intravenous, intramuscular, subcutaneous, and intranasal.8 While naloxone was previously only available in health care settings, the US Food and Drug Administration (FDA) has approved the administration of naloxone in a hand-held auto-injector and a nasal spray.14,15

For patients with a known dependence on opioids, the World Health Organization (WHO) recommends various treatments including psychological support; opioid maintenance treatments, such as methadone and buprenorphine; and reinforced detoxification with opioid antagonists like naltrexone.8 Medical support through a withdrawal period can help patients successfully navigate symptoms.16,17

The breadth of the opioid epidemic has elicited action from both the FDA and CDC. The FDA has developed a comprehensive action plan to eliminate opioid abuse.18 The FDA’s Opioids Action Plan will expand use of advisory committees before approving new drug applications; develop warnings and safety information for immediate-release opioid labels; strengthen post-market requirements for producing data on the long-term impact of using the drug; update risk evaluation and mitigation strategy program; expand access to abuse-deterrent formulations; broaden access to overdose treatment and encourage safe prescribing; and reassess the risk-benefit approval framework for opioid use to incorporate the public health impact of opioid abuse in approval decisions.18

The new CDC guidelines provide recommendations for primary care clinicians who prescribe opioids for chronic pain and include when to begin or continue opioid use for chronic pain, opioid selection, dosage, duration, discontinuation, and assesment of risk and harms of opioid use.19 One of the main goals of the CDC guidelines is to facilitate improved communication between providers and patients about opioid therapy.20 Because treatment options and recommendations for chronic pain should include nonopioid medications as a first-line of defense, the CDC provides information on common medications for pain (Table 1).21

As oral diseases and their treatment often cause significant pain, dentists’ prescription practices may impact the opioid epidemic.22Combination medications containing acetaminophen (APAP) and hydrocodone or APAP-hydrocodone are the most commonly prescribed analgesics among oral and maxillofacial surgeons.23 Among those surveyed by the American Dental Association in 2011, 85% of oral and maxillofacial surgeons reported prescribing an average of 10 tablets to 20 tablets of hydrocodone/acetaminophen, a supply in­tended to treat 2 days to 5 days of post-operative pain.22

Dentists are in a unique position to screen for opioid abuse. A 2016 survey of 87 dentists that assessed opioid prescribing practices found that 44% screened patients for prescription drug abuse.24 Routine consultation with the PDMP is an effective way to reduce opioid prescribing in the dental setting. A New York dental urgent care center experienced a 78% reduction in total opioid prescriptions after implementation of a mandatory PDMP consultation.25 Survey data from 2016 revealed the most cited reason for not using the PDMP was “unawareness of its existence,” reported by 72% of respondents.24 Awareness of the PDMP must increase in order to deter prescription drug abuse.

Concerns regarding the adverse effects of opioid medications have prompted a number of studies evaluating the efficacy of pain relief achieved by combining analgesic medications. Nonsteroidal anti-inflammatory drugs (NSAIDs) are considered first-line treatment for dental pain, which has inflammatory origins.26 It is hypothesized that combining analgesics provides “multimodal analgesia” by offering additive effects of drugs that have different mechanisms of action.27 Ibuprofen is the most commonly used NSAID.23 Acetaminophen is an analgesic medication with an un­known mechanism of action that possesses antipyretic activity but limited anti-inflammatory action.23

There is a potential for acetaminophen toxicity. Current guidelines suggest that while a single dose of 1,000 mg APAP is safe, repeated dosing of APAP should be limited to 500 mg every 4 hours or 650 mg every 6 hours with a maximum daily dose of 3,000 mg. The total dose of ibuprofen should not exceed 2,400 mg per day.23 Adverse effects of APAP-codeine combination medications were more frequently encountered than adverse effects associated with the APAP-ibuprofen combination.23 Thus, it can be argued that the use of an appropriately dosed combination of ibuprofen and acetaminophen is not only safer but also more effective than an APAP-opioid combination medication. Furthermore, combining ibuprofen and acetaminophen produces long-lasting pain relief with few adverse effects. Table 2 shows nonopioid recommended protocols for patients who can tolerate NSAIDs and those who cannot.23,24,26 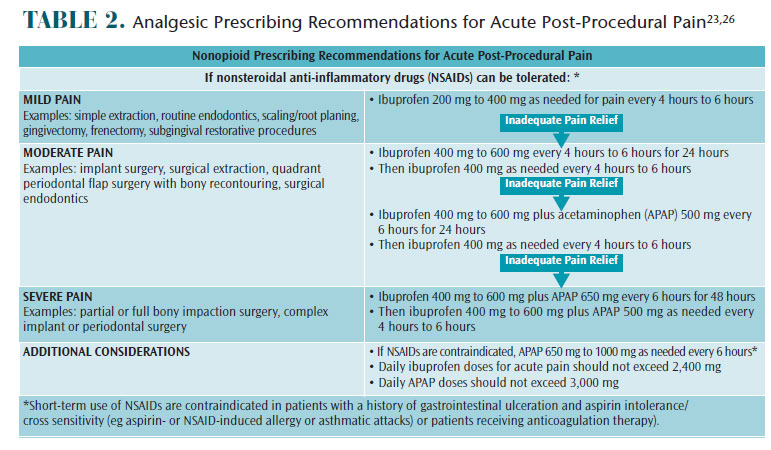 Clinicians should consider additional pain management approaches that have demonstrated efficacy in alleviating post-operative pain. These include the use of a long-acting anesthetic, a preoperative analgesic, or a combination of both. The long-acting anesthetic 0.5% bupivacaine plus 1:200,000 epinephrine provides 6 hours to 9 hours of soft tissue and periosteal anesthesia.30 The use of bupivacaine can reduce the need to use rescue analgesia during the early post-operative hours.31 More important, the use of bupivacaine (compared to 2% lidocaine) administered near the end of periodontal surgical procedures reduced the amount of opioid analgesics needed.32

Oral health professionals need to understand the signs and symptoms of opioid abuse and engage in efforts to curtail it. Consulting statewide PDMPs and evaluating current prescribing practices are steps in the right direction. An evidence-based approach to the treatment of post-procedural pain is paramount to providing effective pain relief without contributing to the opioid epidemic. 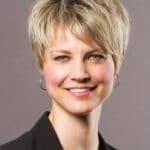 Heather R. Thomas, RDH, BS, MEd, is an assistant clinical professor in the Department of Dental Hygiene and senior clinical instructor at Northern Arizona University (NAU) in Flagstaff. Her teaching responsibilities include advanced clinical instrumentation, public dental health program planning and implementation, and professionalism. Thomas’ areas of interest include dental public health and interprofessional health care. She can be reached at: [email protected] 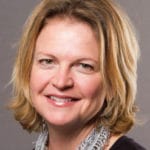 Priscilla A. Rost, RDH, BS, MEd, is an associate clinical professor in the Department of Dental Hygiene at NAU. Her teaching responsibilities include oral medicine and pharmacology, oral pathology, professional development, and orientation to dental hygiene. Rost’s professional interests focus on access to oral health care and curriculum design.

What You Need to Know About Dermal Fillers

Caring for Patients With Alzheimer Disease 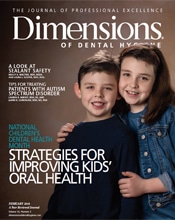