Recipient of the 2019 Esther Wilkins Lifetime Achievement Award Is Revealed

Dimensions of Dental Hygiene, with premier sponsor Colgate and supporting sponsors Patterson Dental and PDT Inc, is pleased to announce that Jacquelyn L. Fried, RDH, BA, MS, is the 2019 recipient of The Esther Wilkins Lifetime Achievement Award. This honor is presented annually to recognize the distinguished career of a worthy individual who has consistently and effectively contributed to the enrichment of the dental hygiene profession. Fried is being recognized for her achievements in broadening the understanding and acceptance of dental hygienists as critical members of the health care team and promoting the success of a new generation of dental hygienists.

Serendipity has played an important role in the life of Jacquelyn L. Fried, RDH, BA, MS. It initially led her to the profession of dental hygiene. With a keen interest in science, a love of people, and support from her parents, she decided upon dental hygiene as a career and earned a certificate in dental hygiene from The Ohio State University, along with a Bachelor of Arts in political science in 1968. After a move to Baltimore, Maryland, serendipity hit again. There happened to be an open position in the Department of Dental Hygiene at the University of Maryland School of Dentistry (UMSOD). Fried was hired as an assistant professor, which began her 40-year tenure in academia. She retired in 2018 as associate professor in the Department of Advanced Oral ­Sciences and Therapeutics and director of interprofessional initiatives at UMSOD, and associate faculty at the UM Schools of Nursing and Pharmacy.

As one of the first dental hygienists to embrace and implement interprofessional education, Fried paved the way with successful initial programs that continue to engage nondental health professionals with student dental health providers. Her work has led to a greater un­der­standing and appreciation for the contributions dental hygienists can make to the health care team.

Passionate about research and writing, Fried is highly re­garded for her work in tobacco cessation. She pioneered the development of the dental hygienist’s role as a tobacco prevention and cessation expert and interventionist.

Named after its inaugural recipient Esther M. Wilkins, BS, RDH, DMD, The Esther Wilkins Lifetime Achievement Award was first presented to its namesake in 2010. Fried will be honored at a reception on June 22, during the American Dental Hygienists’ Association’s 96th Annual Session in Louisville, Kentucky.

What Type of Insurance Should I Purchase Before Starting Practice?

Nebraska Names Hygienist of the Year 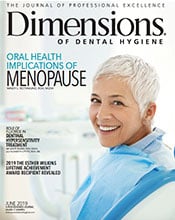