Anew enzyme treatment developed by researchers at the University of Pennsylvania (Penn) School of Dental Medicine may help keep dental caries at bay.

A new enzyme treatment developed by researchers at the University of Pennsylvania (Penn) School of Dental Medicine may help keep dental caries at bay. This approach uses an enzyme treatment that intervenes with the synergistic interaction between the yeast and bacteria that cause caries, while not harming surrounding microbial communities. The study, “Intervening in Symbiotic Cross-Kingdom Biofilm Interactions: a Binding Mechanism-Based Nonmicrobicidal Approach,” appeared in mBio.

Led by Geelsu Hwang, PhD, an assistant professor in the Department of Preventive and Restorative Sciences at Penn Dental Medicine, the investigators sought to develop a targeted measure to prevent cross-kingdom interactions between Candida albicans and Streptococcus mutans, and subsequent accumulation of pathogenic biofilm. The work builds off the team’s 2017 paper, in which they report that molecules on the Candida cell wall, mannans, bind tightly to the enzymes (glycosyltransferases) secreted by S. mutans. To disrupt these interactions, researchers focused on three mannan-degrading enzymes. The mannan-degrading enzymes were applied to biofilm growing on human tooth enamel blocks. After the enzyme treatment, researchers saw a reduction in overall biofilm volume and thickness, as well as reduced interaction between C. albicans and S. mutans. In addition, once treated, in vitro oral biofilms were more easily removed. These enzymes were also determined not to harm human gingival cells in culture.

Noting the potential application of this approach for managing early childhood caries, the researchers say enzyme treatment would neither cause antimicrobial resistance, nor disrupt homeostasis within the oral microbiota.

Clinical Insights: Protect Your Health With a Cordless Handpiece 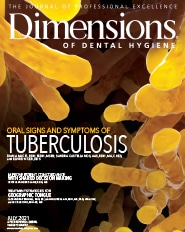