Dentists Top the List of Health Practitioners Americans Want to See More Of Survey finds over 40% of U.S. adults say they don’t go to the dentist as often as they’d like compared to other health practitioners   OAK BROOK,

finds over 40% of U.S. adults say they don’t go to the dentist as often as

their dentists more often. A survey, out today from Delta Dental, finds that dentists 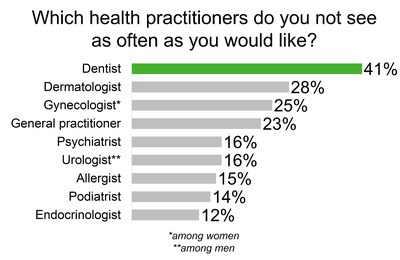 to the survey, 41 percent of American adults reported they do not get to the

dentist as often as they’d like, coming out 13 percent higher than the next

from the 2016 Adult Oral Health Survey, can be found in the chart.

put the dentist at the top of the list of practitioners they want to see more.

the dentist regularly is an important part of maintaining good oral

president of dental science and policy. “We’re at least glad to see that

even those who aren’t getting to the dentist as often as they’d like, recognize

the importance of making more time to do so.”

oral health can lead to a boost in confidence and overall well-being, according

the Survey: The Adult Oral Health Survey was conducted between December 16,

Ill., is the national association of Delta Dental member companies, which

collectively make up the nation’s leading dental benefits provider, with

enrollment of over 73 million Americans. For more information, visit our